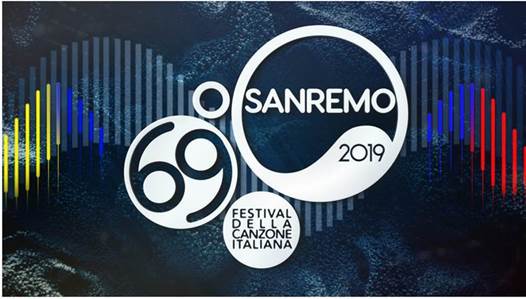 The 69th edition of the Sanremo Italian Song Festival takes place from 5th to 9th February 2019.

A single category and twenty-four challengers for the 69th edition of the Sanremo Festival.

This is the main innovation strongly desired by the Artistic Director Claudio Baglioni for the race that will thrill Italians from 5th to 9th February on Rai1 and Radio2.

On the stage of the Ariston Theater there will be in fact the 22 Artists chosen by the Music Commission in addition to the 2 winners of Sanremo Giovani, who won the passport for the February competition on the evening of December 20 and 21.

They will be the comedy, bittersweet and often surreal, by Claudio Bisio, and the multifaceted talent of Virginia Raffaele’s multifaceted talent, to form – together with Claudio Baglioni, for the second time at the helm of the most important Italian musical review – the conductor trio of five first evenings of Rai1.

Defined by Claudio Baglioni a “musical and spectacular event told by television”, this year’s Sanremo offers a chosen cast of Champions, favoring candidates who have an artistic identity and a recognized and recognizable professional path, as musical interpreters.

For the Artistic Director and the Selection Committee this year’s choice was particularly demanding because the 1550 proposals registered at Sanremo Giovani and the 300 presented at the Festival of the Italian Song of Sanremo express, in the majority of cases, great personality and originality.

The Champions in the competition will participate with 24 unpublished songs and will all perform in the first evening (February 5) of the Festival.

In the following 2 (6 and 7 February) the Champions will interpret, again, their songs in groups of 12.

In the fourth evening (February 8th) the 24 Artists – will reinterpret their songs in competition, in a revisited version or with different musical arrangement, each with a guest artist.

In the fifth evening – the final evening (9 February) new interpretation – performance of the 24 songs in competition by the 24 Artists.

Through the four voting systems of the Televoto (from fixed telephony and mobile telephony), the Demoscopica jury, the jury of the Press Room and the jury of experts will progressively, in the five evenings, to define the rankings that will decree the winning song of Sanremo.

In the first three evenings the public will vote, through Televoto, the Demoscopica jury, the jury of the Press Room.

The three voting systems will have – in determining the ranking of the 24 songs interpreted in the evening – a percentage weight distributed as follows: Television 40%; 30% Demographic jury; jury of the Press Room 30%.

At the end of the third evening will be drawn by Rai a joint ranking of the 24 songs in the race, determined by the average percentage of votes obtained in the First Night and Second (for the first 12 songs) and Third Night (for the second 12 songs) .

In the Fourth Evening the audience will vote, through Televoto, the jury of the Press Room, the jury of experts. The three voting systems in the evening will have a percentage weight distributed as follows: Television 50%; jury of the Press Room 30%; jury of experts 20%. At the end a ranking will be drawn up, determined by the average percentage of votes obtained during the fourth evening by the songs (in the performances with guest artists) and those of the previous evenings. Interpretation and performance with the most voted guest artist will be awarded a special prize by RAI.

In the Fifth Evening (Final Evening) the audience will vote, through the Televoto, the jury of the Press Room, the jury of experts.

The three voting systems will have a percentage weight distributed as follows: Television 50%; jury of the Press Room 30%; jury of experts 20%. At the end a ranking of the songs will be drawn up determined by the average between the percentages of votes obtained in the evening and those of the previous evenings. New voting of the songs turned out to the first 3 places in the ranking, always de: – the public, through Televoto – the jury of the Press Room – the jury of the Experts.

The three voting systems will always have a percentage weight distributed as follows: Television 50%; jury of the Press Room 30%; jury of experts 20%. At the end a new classification of the 3 songs will be drawn up, determined between the percentage of votes obtained in the last voting in the evening and those obtained from previous votes.

The first song in the latter classification will be proclaimed winner of Sanremo 2019.