Darkness of the theater, a car is going and a Gazebo’s song playng and immediatly the mind goes to Vacanze di Natale (80’s comic cult movies), this is the beginning of reunion of the best 90′ couple of comedians of Italy
But this film it’s not just a classic “cinepanettone” (De Sica says “now everybody do this kind of film”) and a four hands script, talk about social problems such as unemployement and foreign investiments, is mixing with classic comic gags (wit a bunch of references to their comic films), but it’s not perfect.

It’s not enough Cesare (De Sica) an important luxury hotel’s director, fired by the new chinese owner, show a perfect woman performance (look like Mrs Doubtfire) or as a good singer, it’s not enough the directors help of his son Brando….the movie don’t become a big movie (good film but not big)
Now the audience and the fans of this artistic duo will be the jury of the future of a film that everybody ask from 13 years ago. 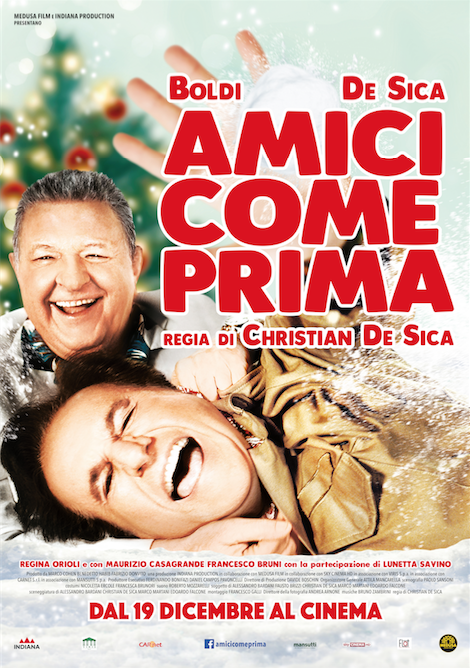 a film by
CHRISTIAN DE SICA

An INDIANA PRODUCTION production in collaboration with MEDUSA FILM

SYNOPSIS
Cesare (Christian De Sica) is the esteemed director of the Relais Colombo, luxury hotel in Milan.
With the arrival of new Chinese partners willing to revolutionize everything, Luciana (Regina Orioli), daughter of Massimo Colombo (Massimo Boldi), the historic owner of the hotel, fired the director first.
Caesar, left without a job, discovers that Luciana is looking for a caregiver for her father, and is willing to spend 5000 euros a month just to stem the lively and arzillo Massimo.
The prospect of such an attractive salary pushes Caesar to run for office. Helped by his friend Marco (Maurizio Casagrande) disguises himself as a woman and becomes the seductive Lisa who, overwhelming Massimo at the first meeting, is hired.
Among hilarious surprises and ambiguous situations, a perfect understanding is born.
However, Cesare did not dare to reveal the truth to his wife Carla (Lunetta Savino) and his son Matteo (Francesco Bruni), who continue to believe him the hotel’s director.
How long will he manage to keep his double identity hidden from everyone?