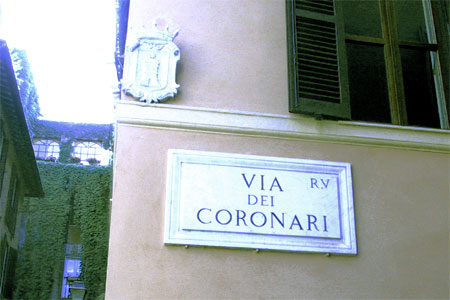 The street was open in 1475, by Pope Sisto IV, with the name of “ via Recta ” that is to say “straight”, to allow pilgrims to reach Saint Peter Basilica without passing through the labyrinth of alleys; it partially repeated the line of an ancient roman street which in the imperial epoch connected “ Via Lata” to a bridge “Ponte Nerone”.

It is nearly 500 meters long, leads until Piazza Navona and it is lined by 15th and 16th century beautiful buildings. At number 156/7 it is possible to admire the famous XV century house of Fiammetta Michaelis, Cesare Borgia’s preferred courtesan.

The present name of the street derives from the many merchants who sold here sacred images and crowns (in Italian “ corone ”) to pilgrims until the XIX century. After Corso Vittorio was opened, the street remained desert, but starting from the 50’s of the 20 th century it became a center of little antique shops, restorers and artisans of any specialization.

Today via dei Coronari is a pedestrian street, very famous in Rome because it is still the reign of antique shops. Along the street on both sides there are plenty of antique shops and galleries selling the best Rome can offer on this articles.

Many of these shops have a tradition in buying and selling antique furniture that started many years ago. Here it is possible to find pieces of every century: lamps, chairs, writing desks, pictures, stamps.

Twice a year, mid-end of October and mid-end of May, a fair is held in this street which become full of lights with the shops opened during the whole day.