In the USA there’re two coasts, two styles and two way to make cinema…we have hollywood star system and the blockbuster and the New York’s style loved by Woody Allen.
In this film we ‘re in the Big Apple, talking about writers and their world, but the director Marielle Heller, select a ticipal hollywood commedy star (Mellissa Mc Carthy, nominated for an oscar) to play Lee Israel.

Based on a true sotry, this film talk about a biopic writer with alcool and social problems , that for financial trouble, decides, with her drinking friend Jack Hock (the great Richard E.Grant, nominated for an oscar too) to write and sell fake letters of great artists and writers.
But it’s not a hollywood commedy and the police is checking those strange letters.
A grat film that ‘s a good reason to spend one evening in a cinema. 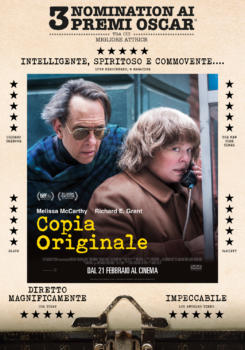 Celebrity biographer Lee Israel makes her living profiling the likes of Katharine Hepburn, Tallulah Bankhead, Estee Lauder and journalist Dorothy Kilgallen. When Lee is no longer able to get published because she has fallen out of step with current tastes, she turns her art form to deception, abetted by her loyal friend Jack.