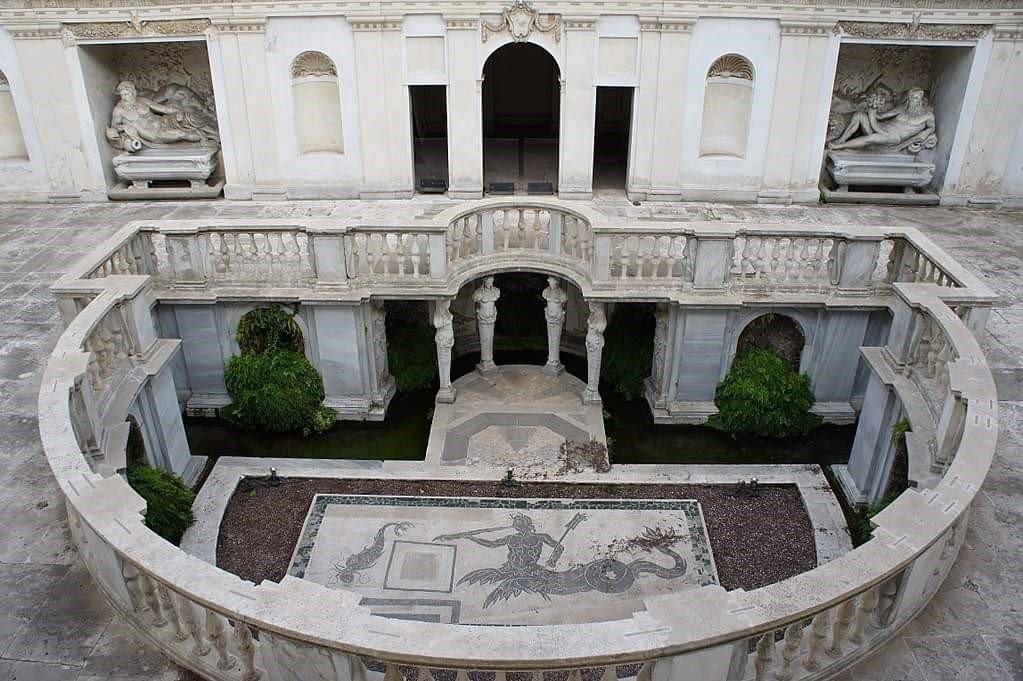 Rome, 29 October 2021. The National Etruscan Museum of Villa Giulia’s planned cleaning of the large black and white mosaic floor in the Nymphaeum, depicting a Triton among mythological marine figures, is all about eco-sustainability.

The mosaic is part of a large Roman mosaic found at Casal di Statua, along the Via Aurelia, the great road that the Romans used to connect Rome with Pisa and Genoa along the Tyrrhenian coast, and dates from the 1st-2nd century AD. The mosaic was detached and dismembered in August 1941 at the behest of Salvatore Aurigemma, then Superintendent of Antiquities for Southern Etruria, and transported to the Museo di Villa Giulia to ensure its preservation and avoid the danger of ruin.
Today it can be admired divided and placed in three parts of the villa: under Ammannati’s loggia, in the lower level of the Nymphaeum and in the second courtyard. The various elements thus formed a single mythological scene, which it is not known whether it was supplemented by other elements and/or by a central representation around which the recovered figures from the marine world were arranged.It was already mentioned in 1923 in the Atti di Archivio della Soprintendenza agli Scavi di Roma as a “mosaic in excellent condition, only very slightly damaged by the workers engaged in the work [for the restoration of a section of the Aurelia]”.
From 2 to 15 November 2021 a delicate cleaning operation began, conducted by restorer Miriam Lamonaca using an innovative product to remove biological patinas. An ecological detergent based on stabilised enzymes, Nasier, made available by the company Brenta srl, which does not contaminate the environment and makes the restorer’s work safe thanks to its ecological properties. The aim of the intervention is the long-term conservation of the materials and the restoration of the legibility of the form and surface for understanding the meaning of the object.
To support the overall intervention, an experiment will be carried out, with the help of diagnostic control surveys conducted by the Tecno.EL company, to compare the efficiency of Nasier detergent technology with respect to traditional enzymatic cleaning. The operation will be followed by a further experimental phase involving the use of a new disinfectant that is safe for the operator and has a low environmental impact, developed by Brenta srl as a follow-up to Nasier detergent.

a visit to the work site by Miriam Lamonaca

You can subscribe before the start of the visit.