3rd edition of Human Landscapes. Reinventing the gaze on the city, listening to its stories 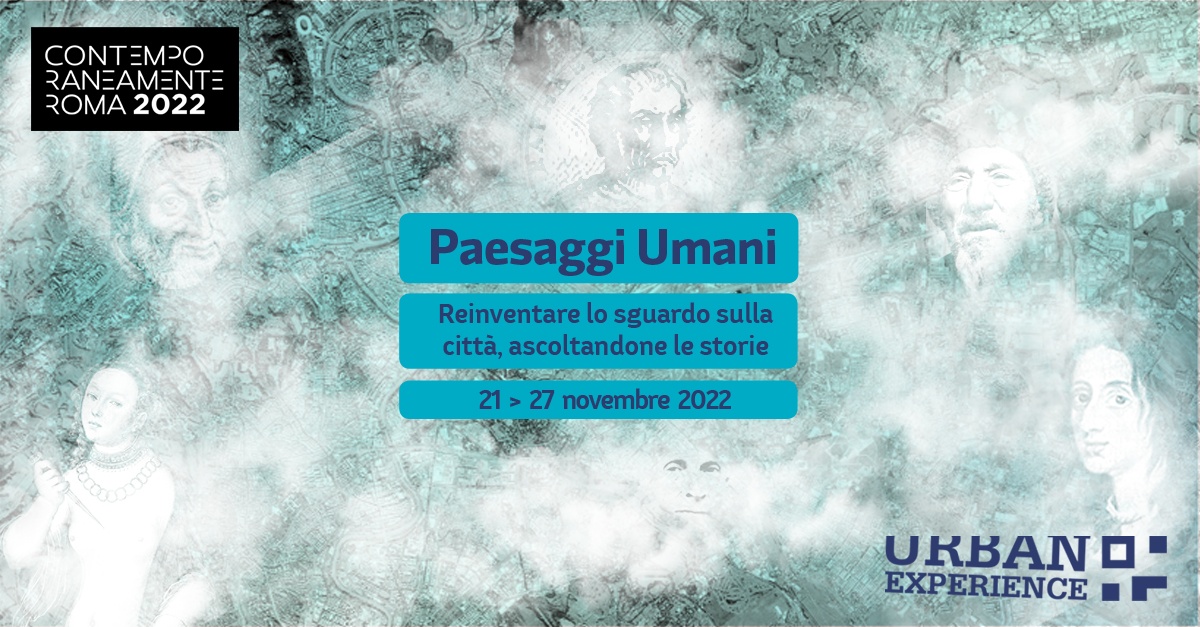 From Nov. 21-27, 2022, the third edition of Human Landscapes takes place, touring the city and streaming web-radio. Reinventing the gaze on the city, listening to its stories.

The project in its third edition, promoted by Roma Culture, is the winner of the Public Notice Contemporaneamente Roma 2020-2021-2022, curated by the Department of Cultural Activities and carried out in collaboration with SIAE.

It will go around Rome in walkabouts, led by Carlo Infante: a radio that walks (local, with radio-headphones and at the same time global with streaming via web radio) giving rhythm to participatory explorations, then leaving georeferenced traces on a talking map, in which to listen to the voices of the protagonists in the territories, both on the web-radio (radiowalkabout.it) and on the app Loquis with geopodcasts. Stories drawn from Roman geographies will be distilled, such as those of Ernesto Nathan and the Garibaldini of the alphabet; Paolo Ramundo, from the Flying Donkey of Tordinona to the social agriculture that included the inmates of the S. Maria della Pietà, when in 1978 thanks to the Basaglia Law it was closed; Lucrezia Romana and her rape that made the Romans rise up and proclaim the Republic; Sixtus V er Papa Tosto who refounded Rome after the Sack of the Lansquenets; Raffaele Fabretti, the founder of Arcadia and defender of ancient epigraphs; Christina of Sweden, the “Queen” of Rome who brought the “Athens of the North” as a dowry; Don Sardelli, the master of the Aqueduct who contributed to the redemption of an area then abyss of poverty.

Human Landscapes (Paesaggi Umani) will present an extraordinary theatrical project in performing media format: Underground by Cuocolo-Bosetti. An ecological experience that traverses what is close to us, such as houses, streets, public and private buildings, the subway itself. The spirit is to re-establish a subtle communication with the viewer, displacing them and igniting their imagination, prompting them right on the threshold with the everyday. The immersive dramaturgical play, via radio, will abstract or spectator from habit, putting him into play, creating the enabling conditions so that a different look at the ordinariness of things can be generated. Starting with oneself is something that is founded in the act of remembering, like the last steps one has taken when one has lost something…or someone. The theatrical action will use Metro C as a means of traversing not only the physical metropolitan space but also the intangible space of urban memory, starting with the personal memory inscribed there, just as in a “human landscape.”

Walkabout “The Garibaldians of the Alphabet” With students from the Department of Education Sciences, University of Roma Tre and Experience lab “Ernesto Nathan, the invention of modern Rome and the war of liberation from ignorance”

Walkabout “Gymnasium of empathy: reconnaissance of the Esquiline” and Experience lab “The poetics-politics of learning everywhere”

With Gaia Riposati and Massimo Di Leo, authors of the book-book “Performing Media, a Remote Future. The Path of Carlo Infante between Avant-Garde Memory and Digital Transition” together with Renato Cuocolo and Roberta Bosetti authors of “Underground”

Walkabout “The footprint of Don Sardelli, the master of the aqueduct.”

4 p.m. Department of Planning Design and Technology of Architecture of Sapienza-University of Rome (Piazza Fontanella Borghese 9)

Walkabout “The violence suffered by Lucretia narrated by Shakespeare”

On the occasion of the UN-sponsored International Day for the Elimination of Violence against Women.

Theatrical action in performing media “Underground. Roberta in the subway” by Cuocolo-Bosetti.

Theatrical action in performing media “Underground. Roberta in the subway.”

Walkabout “The Bird that Cultivates the Land: the epic of Paolo Ramundo from ’68 to social agriculture” with nomadic video projections

Everything takes place outdoors (in any case, even in the rain).
All actions are free and free admission.
Reservations recommended at info@urbanexperience.it, or (WhatsApp) at 3358384927 (give participants’ first and last names, as well as a cell phone for reference). People are also encouraged to bring their own smartphone headphones (those with mini jacks).