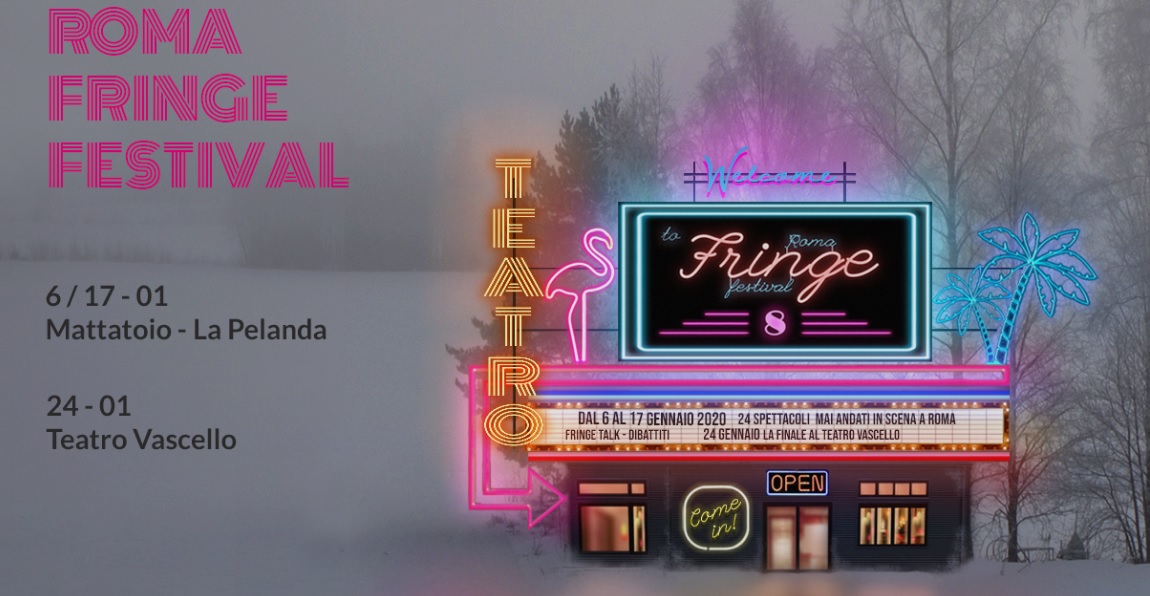 The first Fringe of the peninsula returns to Rome: 24 debuts from Italy, England, Switzerland and Mexico

With 24 debuts from Italy, England, Switzerland, Mexico from January 6 to 17, 2020 at the Mattatoio – Pelanda, with a final evening at the Teatro Vascello on January 24, the winter version of the Roma Fringe Festival is back, this year at its 8th edition, confirming the formula and mission of 2019. On stage will be 24 shows as a “magnifying glass” of the contemporary Italian scene and beyond, to present to the general public, critics and professionals a unique showcase of independent theater, with 6 different shows in the evening alternating on 2 stages, offering only and exclusively shows never performed in Rome, with an imperative password: independence.

Most of the shows staged at the Roma Fringe Festival 2020 are national premieres, selected by the artistic commission led by Fabio Galadini: “unique pieces”, including traditional Italian comedy, comedy, noir, drama, civil theater and comedies, to tell a country and a society with many complex facets, offering a cross-section not only theatrical but also social, political and historical. With particular reference to the theme of inclusion and diversity.

Hosting the 8th edition, the second in the winter version of the Roma Fringe Festival will be one of the nerve centres of the city, Testaccio, in the spaces of the Slaughterhouse – La Pelanda: a splendid example of industrial architecture of the late nineteenth century, a place functional to the different dramas that lends itself with flexibility and ease to the performances in competition, which will offer the public original, intelligent and independent ideas and ideas.

“Independent is a key word also for this edition” explains the artistic director Fabio Galadini “because from this concept we have created, thanks to the participation of 12 theatres all over Italy, starting from the prestigious Teatro Vascello in Rome, a circuit that we have called Zona Indipendente. A network of 12 theatres that will host, in the 2020/2021 season, the winning show of the Roma Fringe Festival 2019. This, together with the possibility of participating in one of the European Fringe, is a prize, which beyond awards or titles, represents a serious opportunity for the winning artist or company to make their work known”.

In addition to the performances, the Roma Fringe Festival 2020 confirms its vision as an observatory by organizing a Fringe Talk debate session chaired by Ferruccio Marotti that will take place at the Department of Architecture of the University Roma 3 on 21 and 21 January, entitled “Development policies of the Third Theatre in Italy and Europe”. The Roma Fringe Festival will take place at the Mattatoio – La Pelanda in Rome from January 6 to 17, 2020 and the final will be held on January 24 at Teatro Vascello in Rome.

The final is scheduled on January 24th at Teatro Vascello in Rome and the winner will be a jury composed by Manuela Kustermann (President of the Jury) Ulderico Pesce, Valentino Orfeo, Ferruccio Marotti, Pasquale Pesce, Pierpaolo Sepe, Italo Moscati, Raffaella Azim. This year the Alessandro Fersen Prize for research and innovation will be introduced directly by the Alessandro Fersen Foundation.

The Roma Fringe Festival 2020 will take place at the Mattatoio – La Pelanda in Rome from January 6 to 17, 2020 and the final will be held on January 24 at the Teatro Vascello in Rome.

Show ticket 8 euro
Tickets on sale at the box office on the very night of the events!

RomeCentral is a Magazine completely no-profit.