It’s already been a year since the death of the great George Michael.
His songs have accompanied entire generations, and today that performer is so extraordinary in music and so eclectic, we miss him terribly. With about 100 million records sold, [2] he is one of the most successful British musical artists in the homeland and abroad, very famous also in the United States, where it is followed by over a million fans. 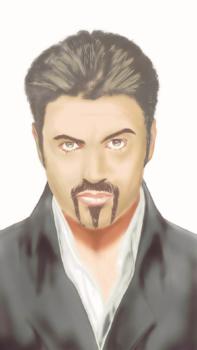 Originally a member of the pop duo Wham !, he then launched a successful solo career that began in 1987 with the album Faith (winning 2 Grammy Awards in the USA and its worldwide tour).
But let’s retrace together the most important stages of his artistic career and his life …
Georgios Kyriacos Panayiotou was born on June 25, 1963 in Bushey (England). His father, restaurateur, is of Greek-Cypriot origin.

It was 1975 when Andrew Ridgely met in the district of North London, at the “Bushey Meads Comprehensive School”.

Four years later (November 5, 1979) together with Paul Ridgely, Andrew’s brother, David Mortimer and Andrew Leaver, the “The Executive” group was born; they try to make ska music without getting much luck.

On March 24, 1982, George Michael and Andrew recorded a demo under the name “Wham!”. The demo leads them to sign a contract with the Innervisions. On May 28, their first single, “Wham Rap!” Is released in England; it will be with “Young guns go for it” that the duo will see significant sales numbers. The following singles are “Bad Boys”, which George Michael proposes as the manifesto of his generation, and the well-known “Club Tropicana”.

The last album of the “Wham!” is “The edge of heaven”. On November 13, 1985 they dissolve; on June 28, 1986, the concert “The Final” at Wembley Stadium brings together 72,000 people, who assist the last chapter of the duo.
George Mihcael instead refines his style and adds elements of black music to his music. In 1987 George Michael was the first ever male vocalist to duet with Aretha Franklin. He then began his travels between London and Denmark where he recorded his first solo album “Faith”, which will sell over 14 million copies worldwide. The first single extract is the controversial “I want your sex”.

In 1988 he participated in the “Nelson Mandela Freedom Concert” at Wembley. Meanwhile, the artist’s image seems to be considered more than music: in 1990 he undertook a total change. Record “Listen Without Prejudice Vol. 1” decides not to appear on the cover, not to appear on video and not to give interviews. In the video of “Praying for Time” only the lyrics of the song appear; in that “Freedom ’90” models of semi-unknown times like Linda Evangelista, Naomi Campbell and Cindy Crawford appear.

From 1991 on he collaborated with various artists including Elton John, with whom he sang at the Wembley stadium an unforgettable “Do not let me go down on me”. The following year, April 20, he participates in the “Freddie Mercury Tribute Concert” where he duets with Lisa Stansfield in “These are the days of our lives”; it amazes when it plays “Somebody to love”.

He still shows his commitment to the fight against AIDS by playing ahead of the Princess of Wales in the “Concert of Hope” broadcast worldwide, served to raise funds and raise awareness about the disease.

In 1992 “Red Hot + Dance” comes out a charity project that contains songs by artists like Madonna, Seal and George Michael.

Then begins a legal battle to free himself from the contract that binds him to the CBS / Sony label. Public opinion considers the singer’s behavior as snobbish. The war in progress against the record company drags George Michael into a long silence.

Finally in 1996, after the longed-for separation from the Epic label, the long awaited album “Older” comes out with Virgin.

On October 8th 1996 he performed an unplugged on MTV that enchants the public. After the album “Older” the happiness and success of George Michael can be considered a rebirth. The best moment of his life is ruined by the disappearance of the mother due to a tumor. She dedicates “Waltz away dreaming”, an extraordinary “recited” greeting with Toby Bourke.

On the death of Lady Diana, to whom she is linked, she gives her “You have been loved”.

Then comes the collection “Ladies and Gentleman” which contains the unreleased “Outside”, a song with which George Michael explicitly declares his homosexuality with irony and an invitation to the whole world to accept any apparent diversity as something absolutely normal.

On the threshold of the new millennium comes “Songs of the last century”, in which are placed pieces that marked the twentieth century rearranged with orchestral parts.

In the early months of 2002, after years of relative record silence, he returned to the scenes with the single “Freeek!”, Whose video brimming with nudity, sexy scenes and assorted sexual depravity unleashes a ruckus among the Puritans of the United Kingdom.

Also in politics, George Michael has “something to say”: in 2003 he released the song “Shoot the dog”, whose cartoon videoclip sees as protagonists the exceptional “lovers”, George W. Bush and Tony Blair. Ms. Blair, Saddam Hussein and … the American missiles also appear.

Change label again and after Universal, the singer returns to Sony. Slides the publication of the album that comes out in 2004: “Patience”, anticipated by the single “Amazing”.

In 2006 he returns with a new single (“An easier affair”) and a new world tour. In May 2011 announces the Symphonica Tour, a world tour with a symphony orchestra. A few months later, on 21 November, he was admitted to Vienna because of a severe form of pneumonia. She returned to perform during the closing ceremony of the London 2012 Olympics, singing “Freedom and White Light”.

On September 4, 2012 he resumed the Symphonica Tour in Vienna, where, on the occasion, he dedicated the concert to all the medical staff who had saved his life 9 months ago. However, it subsequently canceled Australian dates due to fatigue and stress due to the not perfect recovery from the serious illness of the previous year.

In 2014 he returns to the music scene with a new album, “Symphonica”, which contains all the great hits of George Michael performed during the Symphonica Tour concerts.

At only 53, he died suddenly on Christmas Day, December 25, 2016, due to a heart attack at his home in Goring-on-Thames.