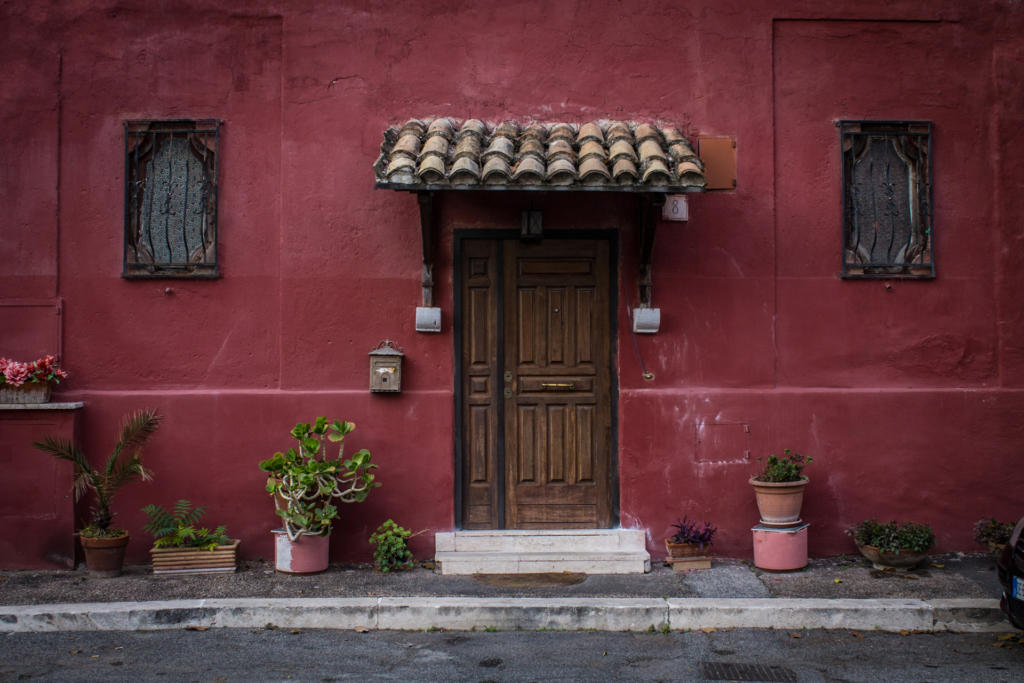 Garbatella is an area of the Ostiense neighborhood belonging to the VIII district of Rome. Built in about 20 years, starting from the area of St.Paul’s hills, despite seeming quite unified, Garbatella went through many different construction phases, taking shape as a real laboratory of styles and types.

The different groups of buildings of this area are the result of the different connections of the Italian society and their changes according to the variety of social groups they were built for.

Even if, in the past, the district went through hard times during which it had a bad reputation, it is nowadays one of the liveliest neighborhoods of Rome, status that was officially confirmed when it obtained the privilege of being called “Rione” one of the historical regions Rome is traditionally divided into. Thanks to this title Garbatella is now widely recognized for its cultural importance and historical relevance. 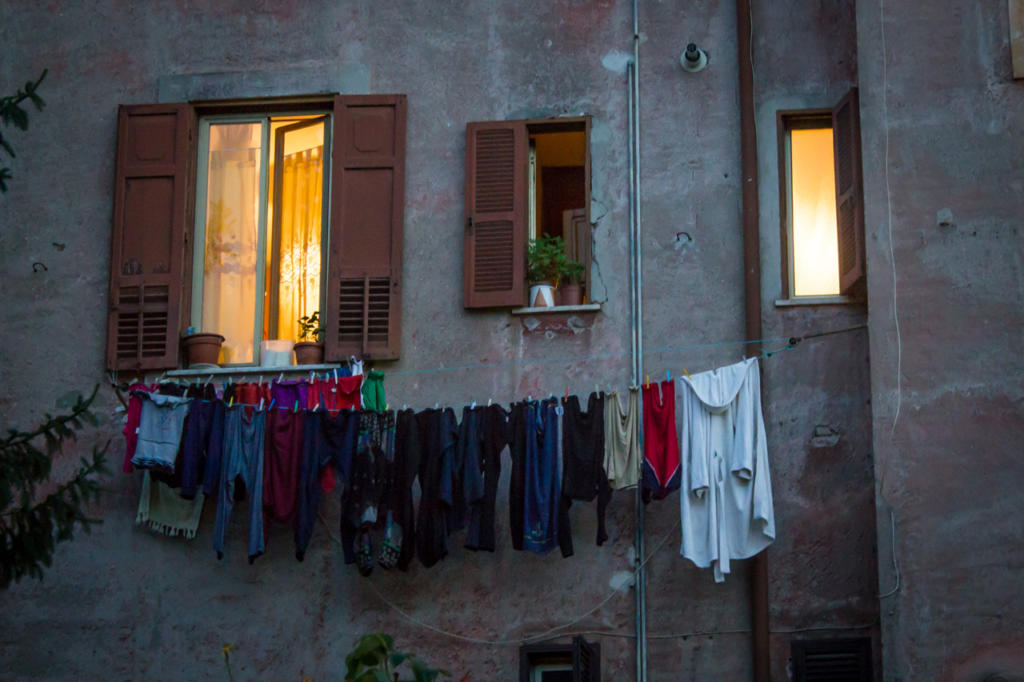 The origin of the name Garbatella is still under discussion. According to a widespread hypothesis, the neighborhood is named after a nice innkeeper named Carlotta (or Maria). She was so beloved by the travelers passing by her inn that everybody started to call her “garbata ostella”, the “polite innkeeper”, later shortened in “garbatella”.

The image of this mythical woman can be seen today on the facade of a building in piazza Geremia Bonomelli.

A second hypothesis regarding the origins of the name Gabatella refers instead to a peculiar type of wine cultivation technique called “barbata” (bearded) or “garbata” (polite) in which the vines are supported by maple or elm trees. This type of cultivation technique was common in the lands called “Tenuta dei 12 cancelli”, a local vineyard that in XIX century belonged to Monsignor Nicholas Maria Nicolai, famed agricultural scientist and intellectual, General Commissioner of the Apostolic Chamber, President of the Lincei Academy and President of the Pontifical Roman Academy of Archaeology.

Garbatella, name by which the area was called way before the district construction begun, was not the only one taken into account. In the official first plan, the district had to host the workers of the nearby Ostiense industrial area, so somebody proposed to call it “Concordia”, the name of the first garden-working class suburb built in 1920 around Piazza Brin. In the fascist period instead, they thought about drawing inspiration from classical historical sources: “Remuria”, the other potential name of Garbatella, was the mythical city Remus wanted to build on the next hill towards the sea, opposed to the Palatine hill, his brother’s Romulus choice (historians will later identify this area on the Aventine hill). 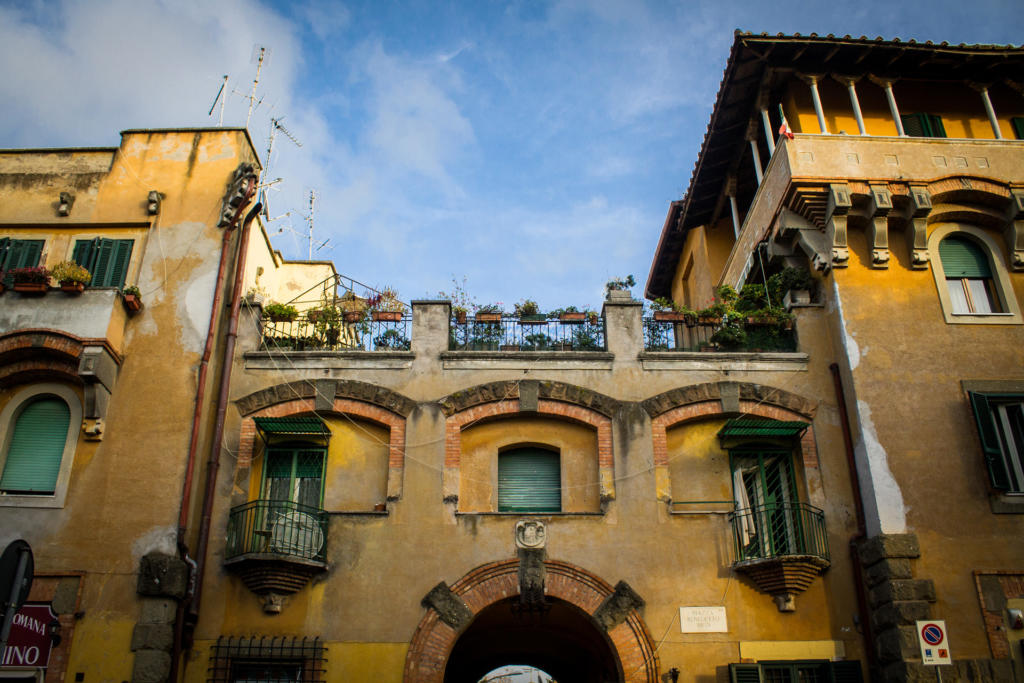 Let’s begin our journey from the very birthplace of the area, Piazza Brin,where we immediately notice the pleasant balance between green areas and buildings; it’s one of the highest percentages in Italy during that period. Together with the extreme richness in the details (notice the beautiful gargoyles and the unique chimneys), despite being outside the ancient Aurelian city walls, we find an headless Roman marble statue, proof that in ancient times this area was a burial ground. Together with the small votive shrine built during the war by the inhabitants of this “lotto” hoping to survive the bombings, another interesting artifact of this piazza is the memorial marble plaque celebrating the laying of the first stone of the district, which dates back to 1920. 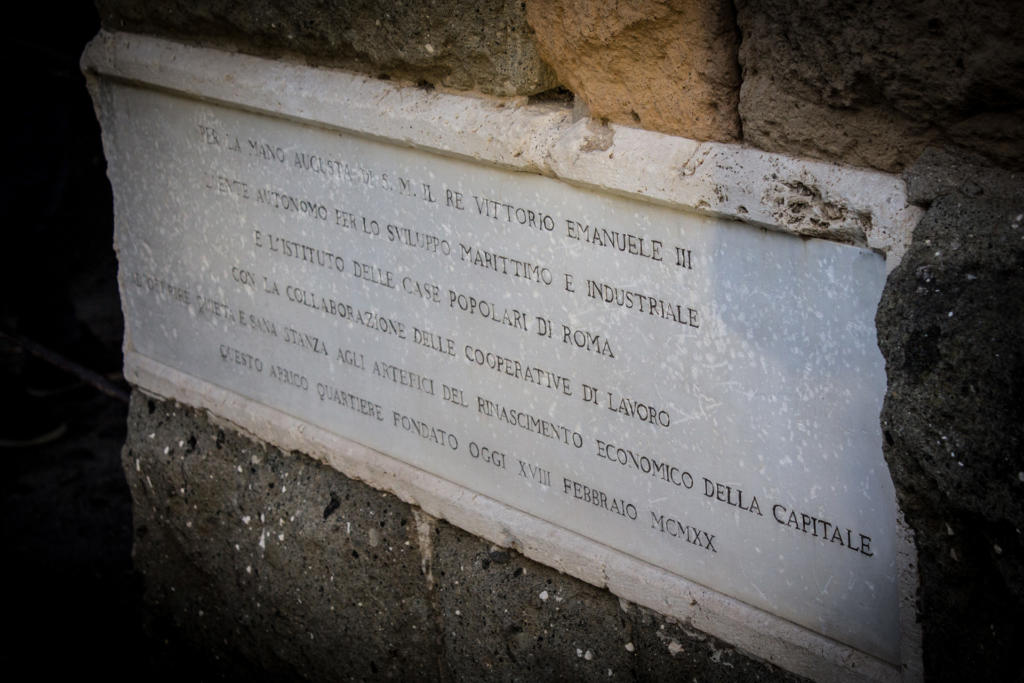 In this photo, together with the royal presence of King Victor Emmanuel the III, the ceremony is attended by the IACP (Independent Public Housing Institute) and the SMIR (Independent Authority for the Maritime and Industrial development of Rome). There is no trace of city Mayor Nathan, to which the historically dominant leftist sentiment of the area would like to assign the district’s foundation. Even though this leftist administration had a great role fighting the abusive urban speculation and stressing the industrial spirit of the area, there are no historical proofs of direct connections between the foundation of Garbatella and the leftist “People’s Block Party“ who only ruled the city until 1913.

IACP was founded in 1903, thanks to Deputy Luigi Luzzati’s will. His idea was to achieve cheap working-class housings in the urban area of Rome; IACP begun immediately to alleviate the housing crisis in Rome through the construction of the interesting Flaminio and San Saba neighborhoods.

SMIR instead was born in 1902 and despite its crucial actions aiming to improve the southern area of Rome, had a short and contradictory life, being already dismissed in 1923. SMIR was the idea of Paolo Orlando, technocrat of Sicilian origin, member of the anti-Bolshevik association, opposition advisor during the rule of Mayor Nathan and promoter of the construction of Ostia harbor. After getting an Engineering degree at Milan’s Politecnico he came to Rome to pursue his political career. Here Orlando immediately begun working on his big plan for the industrial-commercial and maritime development of Rome. 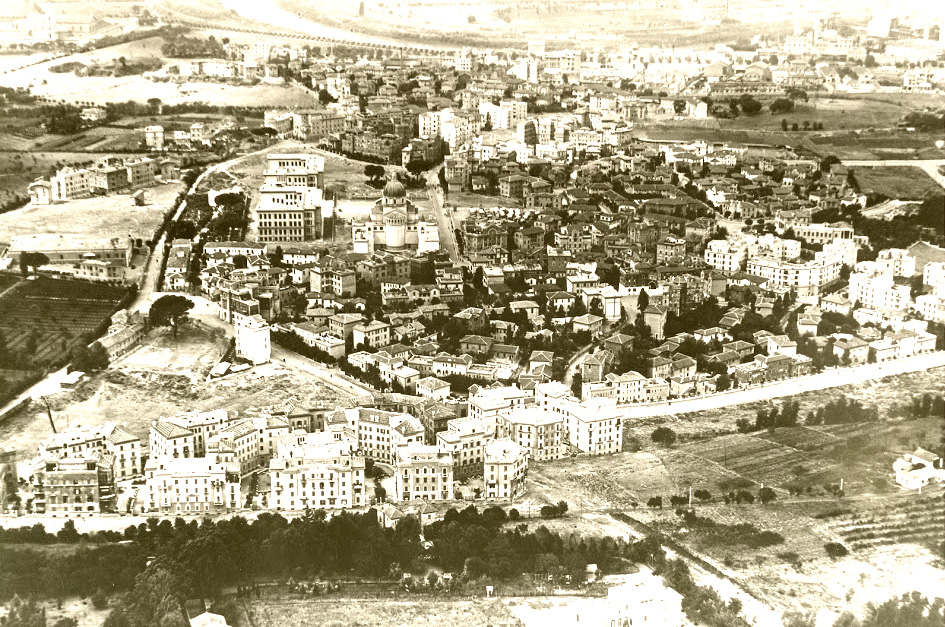 In 1880 Paolo Orlando started a national committee focused to build a huge basin linking the area to the seaside. It would have been equipped with big seaports and connected to the railway network. It was to become the ultimate step to improve the industrial development of the Ostiense area.

This project will never be fulfilled because the planned resources will be redirected to other public works in Northern Italy. Despite the failure of the bigger project Paolo Orlando enrolled, since 1910, IACP and, few years later, architects Gustavo Giovannoni and Marcello Piacentini, who took charge of the district plans.

Going through via Cialdi we get to via di Sant’Adautto. Here we meet the first nucleus of “quick houses”, those of the “Lotti VI and VII” built in 1923.

The buildings look really nice thanks to their tininess and peaceful isolation even if they lack the nice aesthetical details of the houses in the previous lotti. The reason of this difference is the urgent need to create quick and cheap dwellings for the population. The total isolation of this group of houses, close among themselves and located on the top of a small hill, was a comeback of the iconic borgata (working-class suburb), a place of segregation and physical isolation of the unwanted members of the lowest class.

After this period a new progressive social diversification of this area begins; Garbatella will start to host diverse families from different backgrounds evicted by the huge demolition projects that were taking place all over Rome. The first relocated Romans that arrived here were those displaced from the areas of the Theater of Marcellus, the Salita del Grillo and Piazza Montanara, followed in 1929 by those living in the so called “Abissinian villages” of Milvian bridge and Portonaccio. These villages were basically shanty towns lacking proper sanitation, water supply, electricity, streets and other basic human necessities. They were named “Abissinian villages” because they looked like the poor towns of the African colonies of the Italian Empire.

This “quick houses” experience will be repeated in Piazza Masdea and in 1925 in via Magnaghi when, following the lifting of controlled house rental prices in the city center, a huge number of freshly evicted families start to move towards this area looking for a dwelling.

Now we are going into Commodilla’s Park, built over the catacombs bearing the same name. These catacombs were in use from the IV until the IX century and then forgotten for centuries. They were rediscovered only 600 years later.

This underground burial complex was built, as it was common, nearby the remains of one of the many “pozzolana” (volcanic ash) quarries of the city and is named after the landlady that donated this piece of land to Christians in order to create a cemetery.

The most relevant burials we find here are those belonging to the Saints Felice and Adautto, both martyrs under the rule of Emperor Diocletian. Notice that Adautto is not a common Roman name, “adauctus” just means “added” in Latin and, according to VII century historian, it refers to a Christian bystander who offered himself voluntarily for martyrdom.

The galleries of this cemetery offer less artworks if compared to the most famous underground cemeteries in Rome; although they host one of the most important inscriptions in Italy. The graffiti inscription in one of the underground cemetery chapels “non dicere ille secrita a bboce” (don’t speak these secrets aloud), dated between the VI and XI century, is so distant from standard Latin that can be considered the oldest example of “vulgar” Italian language. 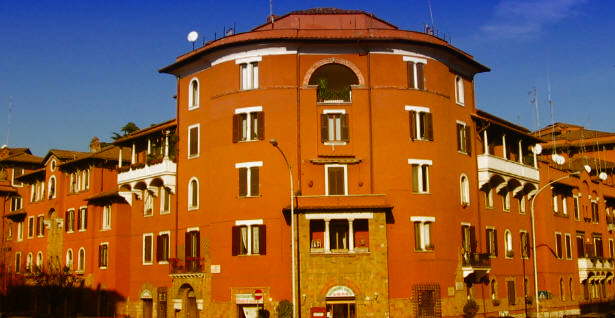 We pass through the gate belonging to the “Nicolai Vineyard and” and we go along via della Garbatella, turning left in via Fincati where we stop at the beautiful “Lotto 8”one of the most profusely decorated. This peculiar group of buildings, gathered around a courtyard, was built by architect Plinio Marconi, who also built Lotto 4 and “Dwelling 13” of the “Model Houses” we’ll discuss in the next Garbatella article. The richness and complexity of the broadly inspired decorations imply that these buildings were intended for richer families from a higher social level capable of redeeming the house in a short time.

The population density of this building, made between 1923 and 1926, is higher than any house previously built in the district. This changing foreshadows the new district urbanization and every future urban plan of Rome. Starting in 1927, low-density council housing won’t be considered profitable anymore even in cheap land areas; small villas and single houses were in fact more expensive if compared to intensive housing policies. 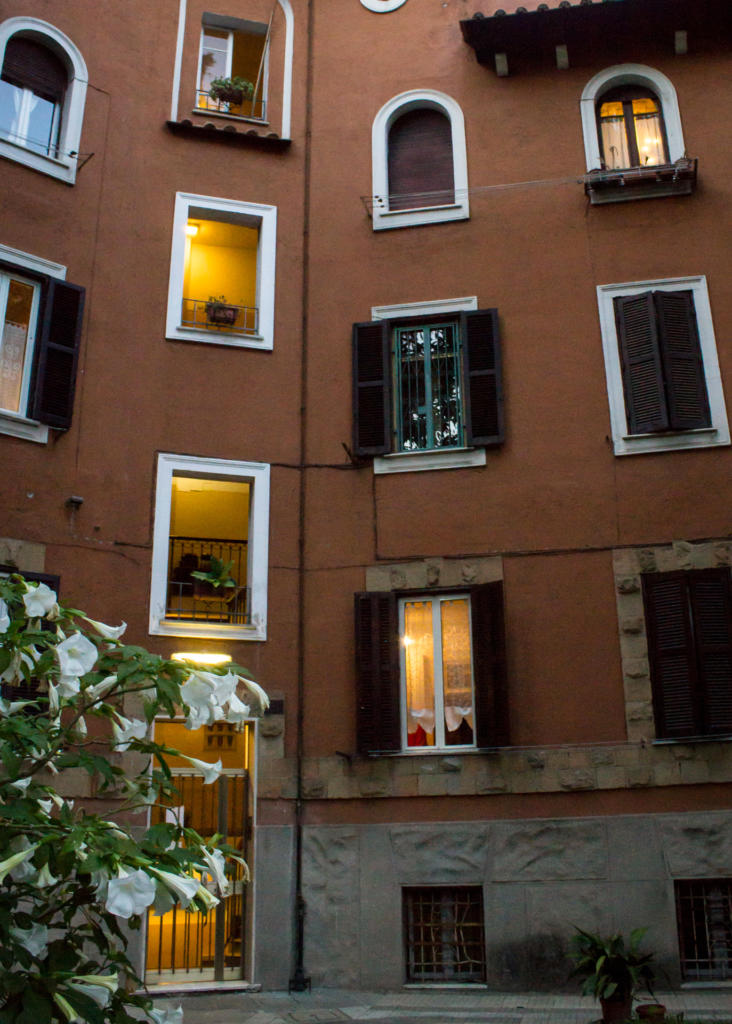 It was the premature beginning of the end of that positive experience of low-density quality dwellings that could have been the modern alternative to the XIX century “block housing” intensive construction model.

Adapted and traslated by Laura Antonucci

“I’ve been passioned with tourguiding since when, at the age of 7, i started taking tourists around the village where we used to spend the summer.
I have two degrees in medieval and modern history and i cultivate a passion for speleoarcheology.
Between 2007 and 2012 I’ve been organizing tours, trips and journeys around Italy for exchange university students from all over the world.
I also have a great passion for nature, food and farming; I’m myself an olive oil producer, a food expert and an olive oil sommelier.”

Laura Antonucci:
I’ve studied architecture, spent here all my life and I always had a huge passion and love for Rome. I’ve read hundreds of books about its history, legends, artworks, urban development and city evolution. I’ve also a huge collection of old pictures of Rome and I love to show them during my tours. I’ve worked as an official guide in Ostia Antica, as a Private tourist driver and also took part to a some European Comenius school exchange programs. I’m always really happy to show around the city to students and foreigners and make them feel and live the true Roman history.

www.venividivisit.org
4 comments to “The Garbatella”