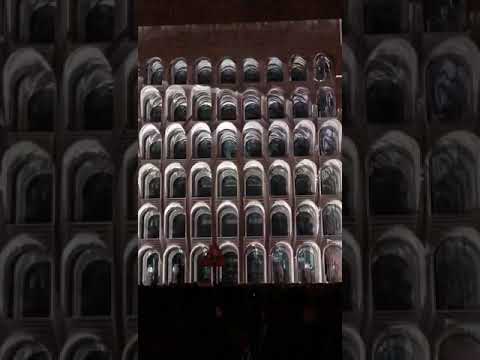 Saturday, October 27, 2018 at Palazzo della Civiltà Italiana, from 20 to 24, was staged the most impressive mapping project ever made in Italy.

For the conclusion of the Videocittà event, László Bordos, considered among the pioneers of digital arts and architectural mapping, has created a work entirely conceived for the Palazzo della Civiltà Italiana.

Videocittà: Videocittà, a cultural review of over sixty events that aim to add a new chapter in the history of a pole that has always been fundamental for the seventh art. An innovative way of looking at the cinema and the audiovisual, to make them dialogue with new creative, artistic and technological forms and to make Rome and Italy compete in a complex and extremely competitive international scenario.

On the Palace of Italian Civilization, Bordos has made an extraordinary intervention icon projectors projectors will be combined with strobe lights and motorized beam, for an unprecedented show.

After 3 years of courtship Solid Light Festival, thanks to Videocittà, he succeeded with the precious support of Fendi, to bring to Rome Laszlo Bordos, one of the pioneers of Videomapping, who realized on the facade of the Palazzo della Civiltà Italiana, the opera site specific LUX FORMAE, a show of mapping and lights among the largest ever made in Italy. 3D animation as a tool used by artists and high-brightness projectors has facilitated the appearance of new techniques to create stunning projections on buildings. Today it is possible to set up complex projections on non-flat surfaces, which make it difficult for viewers to perceive the boundary between real and virtual phenomena. Projections always have a tangible physical component (object or building) on ​​which the virtual content carried by light is projected. During the creative process, the artist builds an exact virtual replica of the physical world and uses it to produce the creative level of the work. Finally, that creative content is projected onto the real spatial form (object, building, etc.). The re-projection of the virtual 3D animation on the real 3D scene and the interaction that derives from the combination of the two components, translate into new visual experiences, often surprising and perplexing for the viewer. To further improve this experience, Bordos also uses lights and stroboscopes to play with different light qualities.

László Bordos – “Lux Formae” – supported by Fendi – Palace of Italian Civilization, 27 October; h 20-24.
One of the first to experiment with this new art, Bordos has worked on the most important buildings in the world including the Eiffel Tower in Paris and the Burj Al Arab in Dubai. Today he is considered a true star in the world of mapping, having overseen over 50 projects in 22 countries over the past few years.