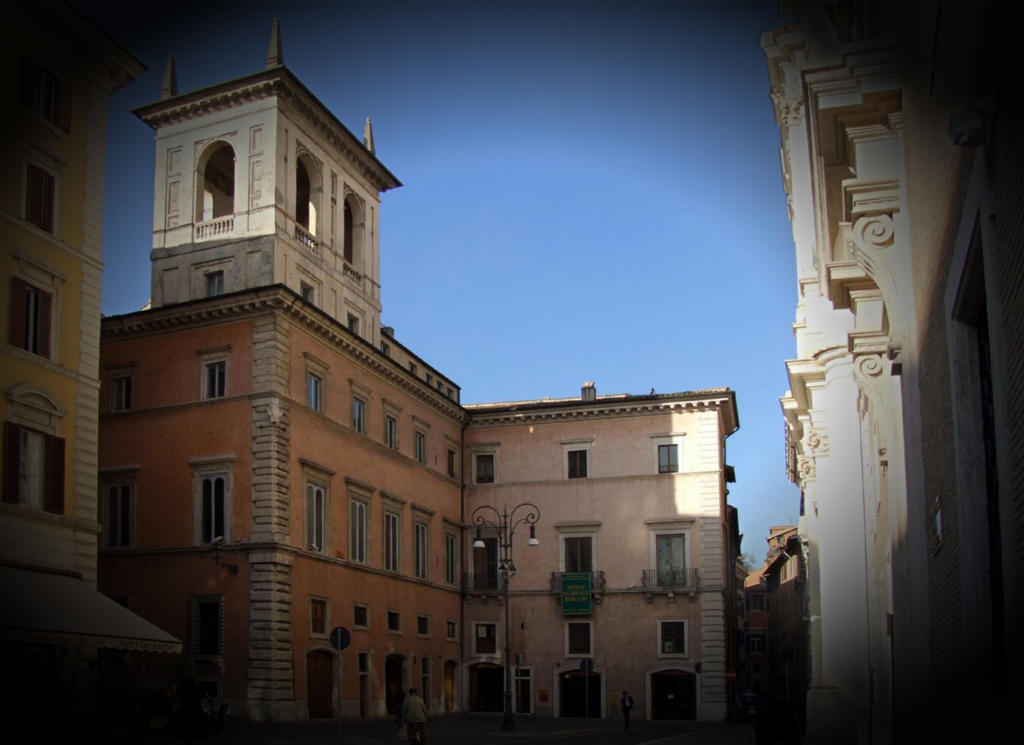 This beautiful building was built by Girolamo Riario, who wanted completed its work before her wedding with Caterina Sforza. But the ceremony took place while still expanding the building was still going on.
This building occupies an area where in ancient times there was a temple of Apollo, an area where there were numerous marble workshops. They were recovered numerous historical artifacts such as decorations probably of the first century, fragments of flooring and a granite column of considerable size. 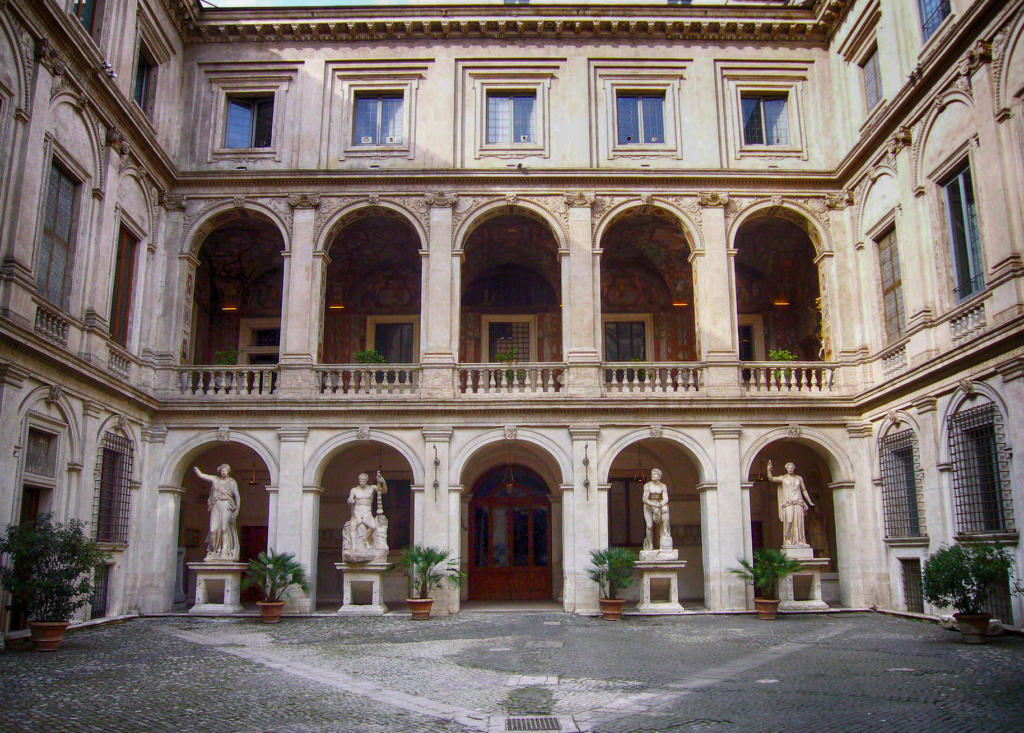 Collaborated expansion of the palace Melozzo from Forlì, Luca Pacioli and perhaps Leon Battista Alberti.In 1511 Cardinal Francesco Soderini buys the Palace and makes some works for enlarge the Palace, buildings a balcony on the courtyard and decorates the interior and exterior facades.It is made the residence of the Spanish ambassador and later was bought by Cardinal Marco ausriaco Sittico Altemps.
This Cardinal established the Library and the Altemps Collection, made up of ancient sculptures. He went further enlargements and decorations.After the beheading of Roberto, the son of Marco, commissioned by Pope Sixtus V on charges of adultery, the masterpieces inside the Palace as the roof terrace and the Studiolo of Clemenza, constitute a moving memory of a father and a grace offered to the pontiff, but he denied. It was also built the Church of Sant’Aliceto inside the Palace for Roberto by his son Giovanni Angelo Altemps.The Palace has become one of its cultural destiny, in 1690 was founded here the Arcadian Academy, from where one of the most important literary currents of the first Seven hundred. 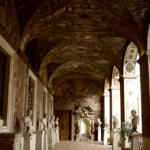 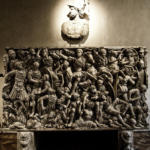 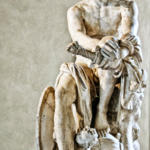 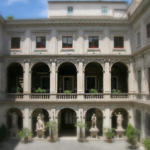 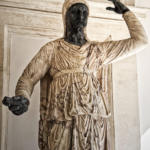 In 1724, Cardinal Melchior de Polignac made it their headquarters, gave many parties and dances. Mozart will accompany these events with his music. A fountain is also located throwing wine in front of the entrance of the Palace.The internal Goldoni theater, built by Marco Sittico Altemps, did many performances.In XIX the building was transferred to the Holy See, with the exception of an apartment reserved for Lucrezia Alessandra Altemps, her husband and her daughter Maria, who married D’Annunzio in 1883 in the Church of Sant’Aliceto.In 1982 the building was purchased by the State since 1997 and become home to the National Roman Museum, which contains collections of Roman statues of Roman noble families, including the Altemps collection, Del Drago, Mattei, and a big part of Boncompagni Ludovisi collection .A section is dedicated to the Egyptian collection, always alive mania of oriental cults in Rome.

Grandchild of Pope Sixtus IV, who once ascended to the papal throne, will make sure to give grandeur to his two grandsons, Pietro, the greater, to religious life and Girolamo to the military. Peter was made Cardinal of San Sisto, Patriarch of Constantinople, Archbishop of Florence. In 1473 he bought the town and the principality of Imola. A year later he died and Girolamo got the city. Then, he was proposed to invade small neighboring states, taking advantage of the Pope’s credit, his uncle. But it was hampered by Lorenzo de Medici. In revenge Girolamo became part of the conspiracy de ‘Pazzi (An attempt to put an end to the supremacy of the Medici), but since Lorenzo de Medici did not fall under the conspirators, the Pope at his grandchild to make war. Taking advantage of the troops at his disposal, he took Forlì. Hoping to become lord of the Duchy of Ferrara, he induced Sixtus IV in a league against the Venetians. He gave battle to the Duke of Calabria who gave aid to the Duke of Ferrara, and Girolamo defeated him in Velletri.In 1482, he make peace between the Pope and the Duke of Ferrara and following the Pope excommunicated the Venetians in order to force them to lay down their arms. Jerome had not received in Romagna the success he hoped, turned his forces against the Barons of Rome.With the arrest and beheading by Papal Order Column, Girolamo, he took possession of Marino, the Cava and other properties of the Column fortresses.During this series of conquests, Pope Sixtus IV died and the Colonna estates rebelled and Girolamo was exposed to assaults.He decided to move to Forli, where he began to build magnificent buildings, as well as at Imola. Although there were, around him, many enemies and he was assassinated in 1488. 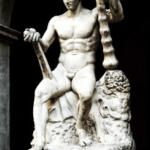 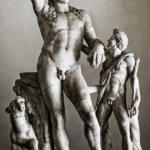 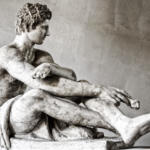 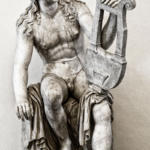 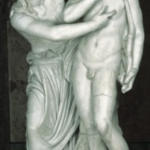 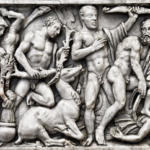 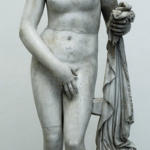 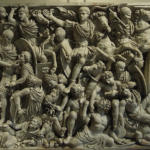 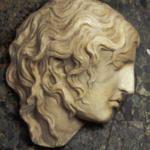 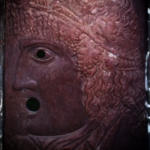 The Altemps Collection  – Marco Sittico Altemps was an avid collector, and during his lifetime he amassed a valuable collection of books and ancient statues. The nephew Giovanni Angelo Altemps continued to add works to the collection. Most of the Altemps collection, which consisted of more than a hundred works, including paintings and sculptures books, was distributed in different institutions. Some of the Altemps collection statues adorn the northern loggia of Palazzo Altemps where there are still four large statues located in the north of the porch and other sculptures that decorate the staircase.

The Boncompagni Collection  – In the ground floor and first floor are exhibited 104 sculptures that the Italian State, in 1900, has bought from Ludovisi-Boncompagni family. Among the most representative examples are the Acrolith Ludovisi, the Ludovisi Throne, Galata suicide, Athena restored by Algardi, the Ares restored by Bernini and the Great Sarcophagus Ludovisi.

The Mattei collection  – In the galleries at the sides of the courtyard, and in a few antique sculptures are exhibited on the first floor room that originally adorned the villa and the gardens Ciriaco Mattei Celio hill: The saatua of Dacio yellow marble is particularly renowned.

The Drago collection  – In the south loggia are exposed reliefs of the four collezioneappartenuti the Dragon family; They had met and drawn from the fifteenth century, and studied and even admired by the famous German art historian Johann Joachim Winckelmann.

The Egyptian collection – The sculptures on display in the so-called apartments of D’Annunzio were found in Rome in the Campus Martius area where once the largest shrine dedicated to Isis was; THE works in part come from Egypt and are partly the result of a Roman production, after the diffusion of Egyptian cults in the West. In The Mother Goddess room contains the Ephesus Artemis head unearthed in 2009 during urban excavations in via Marmorata. 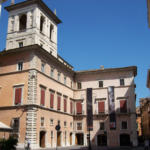 Open every day from 9.00 to 19.45.Closed Mondays (except Easter Monday and during the “Culture Week”), 1 January, 25 December.The Ticket Office closes one hour before closing time.

She was born in Rome. She comes from the hotel school , where she studied art history with big passion . Once graduated , she worked as a secretary for years in one office, but for her personality was a grey job and without something interesting. So she quit and she moved for one period in Tallinn (Estonia) where she started learning English. Once back in Italy she had a goal, to work in her sector, and after a few months she could find what she wanted, in a farm/agriturism .
“I love being surrounded by food and art.”