Our journey begins among the Italians in the World, the millions of compatriots who have decided to start a new life, far from their native land, those driven by an innate nature to look for something more, who by necessity, who for survival, because ‘let’s face it … Italy has become, in some ways, a difficult place!
But it is still the cradle of history, art, culture, enchanted landscapes that overlook the sea, like Sorrento, or the extraordinary times of the glorious times that were and which are still alive today, centuries after centuries, in the city like Pompeii, Rome, Florence, Venice, cities envied and admired in every corner of the Earth!
But the Italians have distinguished themselves in the World, and continue to stand out, especially for their creativity, not surprisingly Italian fashion, Italian cinema, Italian food, and our millennial culture, are fundamental cornerstones, for the development of today’s society in the history of humanity.

So let’s start this adventure, to discover many lives, of our compatriots, in foreign lands … and we do it with the intention of letting you know who the Italians really are and how much determination, courage, and talent, we employ, to reach our goals and stand out, in any corner of the Earth we find ourselves!
What better way to start this journey, with a guy named Roberto, an Italian surgeon who lives in Barcelona and who turns into a DJ at night! But not just any DJ … but one of the most popular DJs and requested abroad!

I had the opportunity to meet him at the beginning of his artistic career and as always to bring good luck … as it has already happened with famous artists I met in my life, from Teo Mammuccari to Sister Cristina and many others … in those days his was just a passion, but from the first moment I perceived that something “unique” that I recognize in real talents immediately … and of course my nose for these things never betrays me!

Ladies and gentlemen … to you: Roberto Ferrari!

1) Hi Roberto, how long have you lived abroad in Spain and why did you choose Barcelona?
I have been living in Spain since 2014. I chose Barcelona because I find it a city full of life and creative stimuli. Of course I love the sea and the sun. Between a trip and the other, I always try to take a break in front of the sea, always a great source of new inspiration.
2) Do you miss Italy a little?
I miss my family but I do not miss Italy. I always find it a little behind the other Mediterranean countries. I had to emigrate to be able to really express myself and to achieve international success.

3) You are a surgeon and have a passion for music, so at night you turn into DJ Roberto Ferrari! Tell us about your passion for the console?
I always had the passion for the console but it was just a passion. I am always
heard more than an artist rather than a doctor. Now that it has become my real profession, I can say you can not escape your destiny
4) Where do you come from in Italy?
Son of a small Lombard town of 20,000 souls. Already then I felt different from everyone else.
5) Abroad you have become one of the most requested DJs in the GLBT world, are you satisfied with the results you have achieved?
Yes, success came unexpectedly. It all started as a game. Then the actual explosion with my original Pink remix. From then on, when they started to stop me on the street, I realized that something had changed and my life would not have been the same.

6) I know that you also make music producers, which are the pieces made, of which you are more proud?
Having studied at the conservatory, I was born as a musician. Even today I consider myself a musician. Only for commercial reasons, I found myself playing with my image of a sex symbol.

7) Projects for the future?
For the future I have big projects with internationally renowned artists, I can not make names for now, it’s still all top secret. And then I started collecting new material for my next album.
8) Where can they listen to you if someone is on holiday in Spain?
They are resident DJs in some of the most fashionable clubs in Barcelona, ​​including the Tanga on Friday, the Saturday Matrix and as a special guest on Saturdays at Ultra Pop. And then I’m having a lot of fun as a resident DJ on a European tour with Dream, the French company Delice Dream.
9) What advice would you give to a guy who is deciding to go and live abroad?
I always encourage new experiences and changes. They make you grow and offer new insights
10) Tell us about a typical day of Roberto Ferrari?
Wake up at 7.30, I wear the white coat and go to the hospital until the evening. After a fixed stop in the gym and or 6 and sometimes I even wake up at night to capture a melody that jumps in my head.
11) Do you prefer scalpels or disks anymore?
What questions!
12) In the World of Spanish movida you have also become a Sex Simbol … how does it make you feel?
It’s all a game. And I like to play! 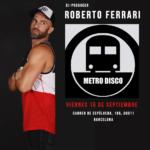 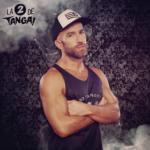 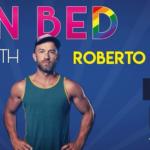 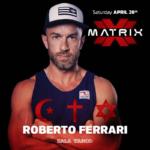