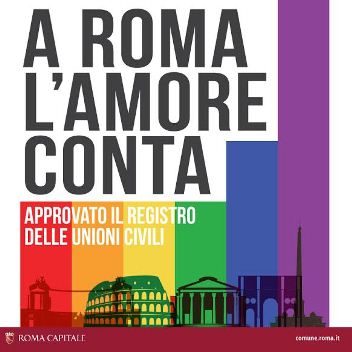 In January 29, 2015, the Capitoline Assembly of  Rome approved the establishment of the register of civil unions.

The Mayor stated that “The capital of Italy gives the signal that, in this city, love is the same for everyone.”

To this register can sign all “subjects Italian, Community or other foreigners, age and life partners of the opposite sex or the same sex, of which at least one resident of the City of Rome, which are not part of another civil union and that they are unmarried subjects third “. The couple will have to prove that they are cohabiting for at least one year and shall not be bound by kinship to the fourth degree, adoption, guardianship or administration support.

Couples registered in the register will be equivalent to those married with regard to benefits to municipal services. In detail, the members will have access to lists of public housing, enroll their children in kindergartens municipal, or even make use of the facilities offered by the City.

The register should be operational by early March. Meanwhile the necessary forms will be prepared to adjust the inscriptions.

The Capitoline Administration is committed, therefore, to ensure those who enroll in a series of services that today’s so-called “de facto couples” are excluded.

i3factory.com
2 comments to “Rome approved the establishment of the register of civil unions”