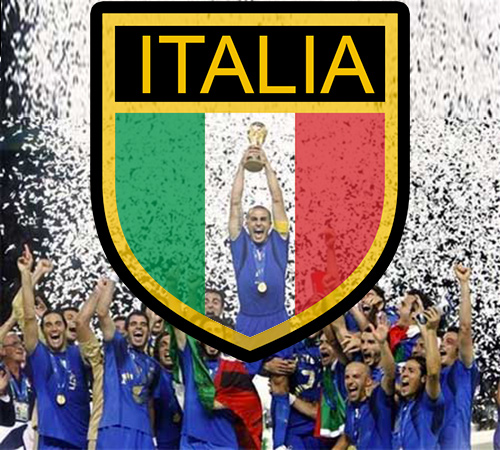 Few countries in the world have its defining moments wrapped around a sport as
Italy does with soccer.  Soccer in Italy is more than just a sport.  It is religion.  Soccer is just as much as Italian as pasta, wine, or vespas. It is interwoven into national history and is one of the few things that all Italians can agree on.
Every Italian could tell you a story about their youth, and most likely it would involve soccer.  Fond child hood memories revisited might evoke images of school kids congregating on the local soccer pitch, where they would play for hours until the sun went down, and often into the darkness of night, as they searched for that elusive final goal.  Children engaged in a furious battle for the ability to gloat in class the next day.
Italians are a proud bunch of people when it comes to soccer, and bragging rights go a long way in this country.
“Soccer to me is life” says Matteo, 32, of Rome.  “It is something that I have grown up with and it gives me great pleasure, to watch it, to play it”.
“I can’t think of many things in my life that give me so much pleasure and sorrow at the same time, except for maybe Italian women.”
Italy is known for its rich culture and traditions, countless monuments and historic buildings. And we shouldn’t  forget the wonderful Italian cuisine either.  While these are all symbols of national identity, soccer is Italian identity .  It is a way of life.
Soccer is embedded in the Italian national conscience.  It allows people from diverse social and economic backgrounds to come together and collectively embrace their national passion.
In a country like Italy, soccer has done a far better job than most in breaking down social barriers.  Soccer is a unifying force that rises above all else.

Soccer is the framework by which most young men and women learned to work hard, learned to excel, learned how to set goals and how to achieve them.  It is a game and a dream and so much a part of  the fabric of life in Italy.
While soccer is a unifying presence for many Italians, there are also huge
divisions, depending on what team one cheers for.  This is none more apparent than in Rome, where there are two Series A teams, Roma and Lazio.  These two teams are like black and white, and have been engaged in a bitter rivalry for many years.  Roma represents the common man, while Lazio’s supporters are mainly upper class. That said, Roma has many  more loyal supporters. The Roma-Lazio conflict is by far the largest in Italian soccer.  They both call Stadio Olympico their home stadium, but they play each other  twice a year to establish supremacy in Roman soccer lore.  These games are known as the “derbies”, and are the hottest tickets in town.
During game days, one doesn’t even have to turn on the television to know the
score.  For when Roma scores, the streets are filled with the noise of honking horns.
Roma fans hang out of their windows and bellow enthusiastically into the streets.  This is when they are the happiest, unified and fulfilled, the moment when Roma scores.  It is electric.  A pure, beautiful emotion shared by an entire legion of  fans all at once.
Going to a game is a cultural experience, inside of Italy.  Whether meeting friends
outside of the stadium, drinking cafè Borghetti until its warming effects make one forget about the cold.  Waiting in line for hours in the cold amongst a constant excited chatter of the loyal followers.  The experience begins long before the game even starts. Thousands of people frantically rushing towards Curva Sud, the only place to sit for a devoted Roma fan.  Waving flags and lighting flares as the players emerge onto the pitch.
It is truly an amazing sight to witness upwards of 80,000 people all holding coloured flares above their heads just before the game starts.
Like a giant birthday cake.
In a country like Italy, where the population is so diverse and widespread, soccer
is something that all Italians have in common. Moreover, soccer remains one of the only topics where Italians see eye to eye. Soccer is unique in that it is more than a sport.  It brings different sorts of people together; young and old, rich and poor, urban and rural, Northern and Southern, if only for a few hours on a Sunday afternoon. It is tradition and an institution and very much the framework for social behaviour in Italy. Soccer is not just a game, but an obsession that everyone in Italy embraces and understands.

For more information on soccer in Rome, here are some useful websites:

www.footballinrome.co.uk
-everything you ever wanted to know about football in Rome, including ticket information, schedules,etc

www.asromacalcio.it
-The official site of AS Roma soccer club