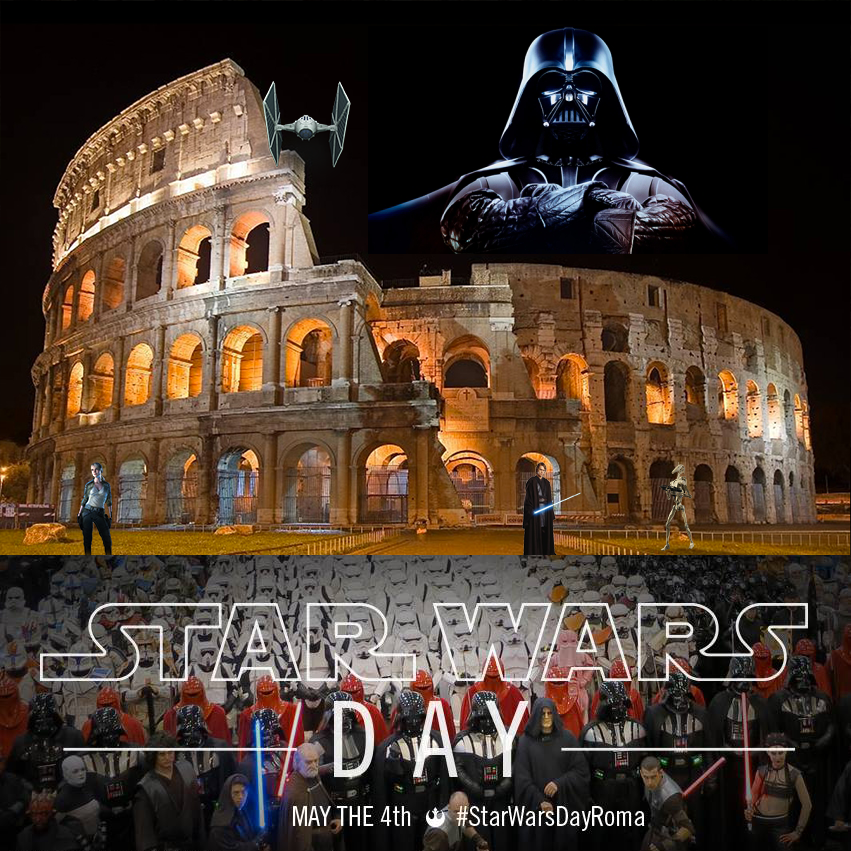 The similarity between “May the 4th Be With You” and the phrase used by Jedi Knights “May the Force be with you” or “May the force be with you”, dates back to 1979, the day on which Mrs. Margaret Thatcher won the elections in the UK, becoming the first woman prime minister of Great Britain,

when his party dedicated a page of the newspaper the London Evening News with the message “May the Fourth Be With You, Maggie. Congratulations”. 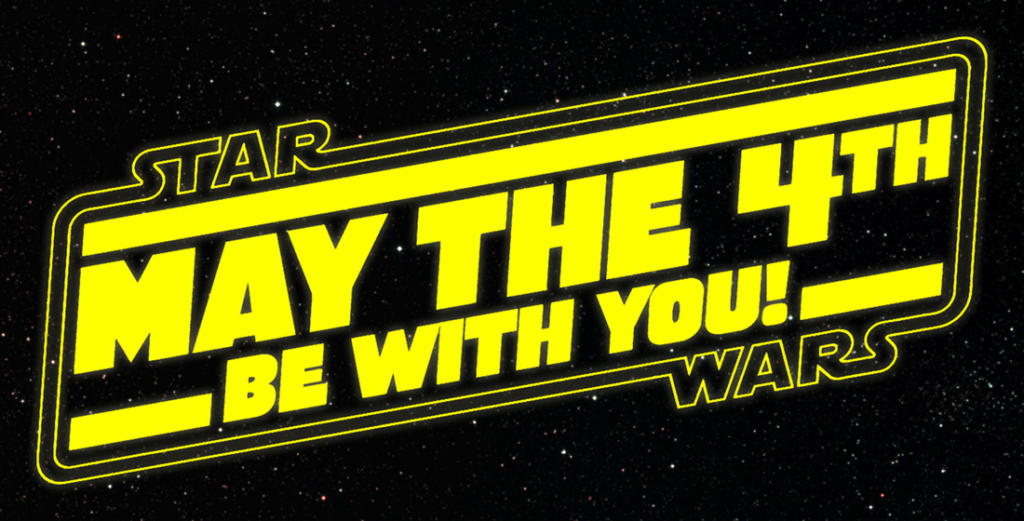 Sunday May 4, 2014 was supposed to be a special day for the italian fans of Star Wars movie, the Colosseum (Flavian Amphitheater) was to become the location for the first “Star Wars Day” in Italy.

The plan was that starting from 10.30 am in front of the Colosseum would be able to walk and interact with the characters of Star Wars. There was also a reproduction of the imperial hunting TIE Fighter Advanced X1. In the shadow of the Colosseum there should have been a number of events, activities and entertainment … But the “Empire Strikes Back”!, The contemporary Roman Empire hits more effectively even Darth Vader or Lord Fener, and even the very bad emperor of the galaxy could pull the head to Luke Skywalker and his fans.

In fact, a parade there ‘was a little before 10 and then to 12 has begun to dismantle the disappointment of many who had managed to reach the center of Rome just at that time. 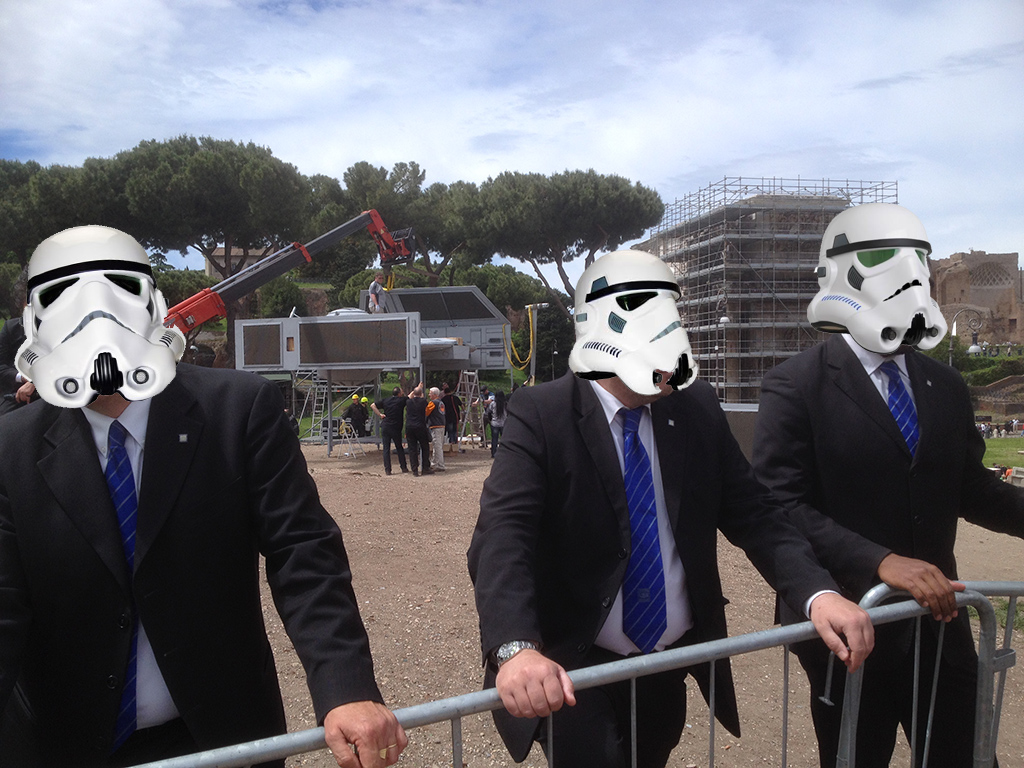 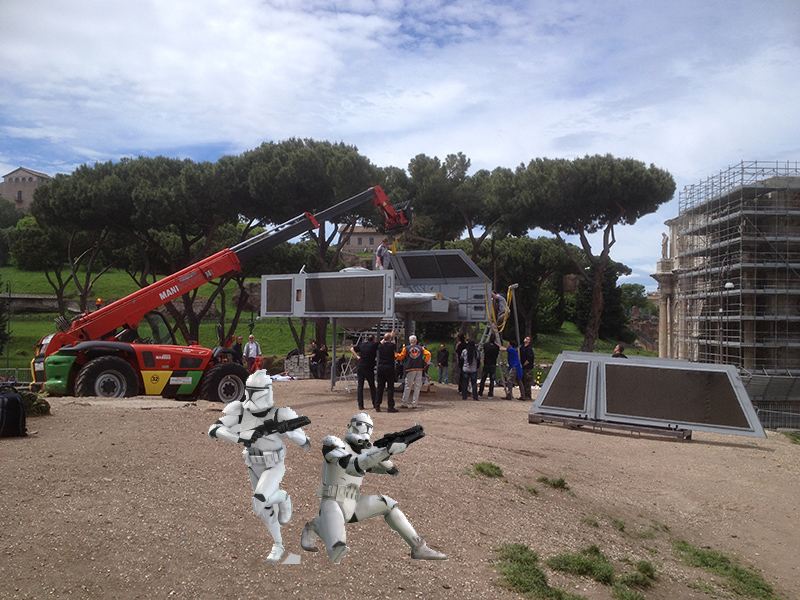 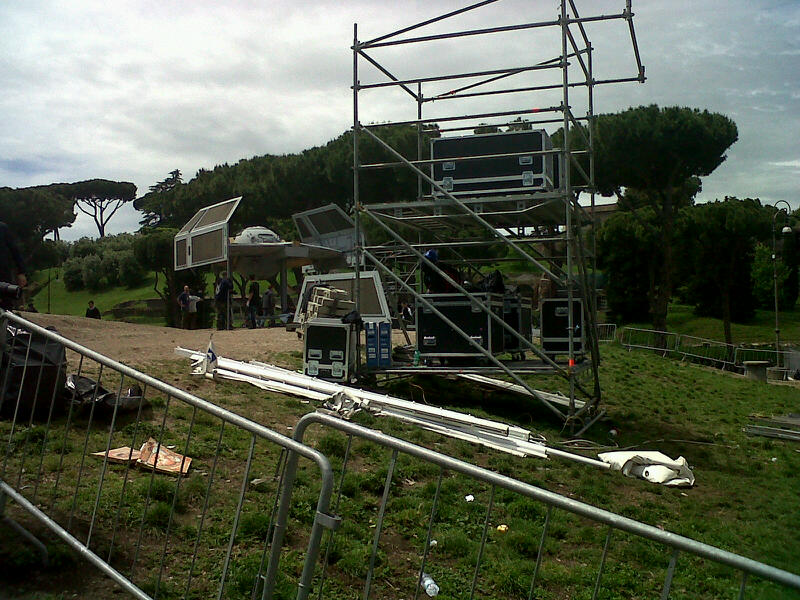 Well it was: already at 12.00 were dismantling the Tie Fighter and although many fans had come from outside Rome ,some came by train and others by car, there was no way to attend the event because … there’s just been .” The usual thing Italianate , where it is no longer being respect for nothing and nobody ” say aloud some girls come from afar to post .

In front of the Colosseum only disappointment and it is just waiting for the destruction of the last pockets of enthusiasm.

Ourselves we could not believe it: we asked some people in the mob and then the security men who have informed us that the Rome City Hall has not given permission to perform this non-political event and that they were removing the few things installed since they could not begin to do anything .

Luke Skywalker and Han Solo and Princess Leila are dead on arrival in Rome ? At least for the administration of Rome Capitoline this seems to be a statement and not a question says a passer disappointed.

Another passing reminds us that on May 4 in the Italian capital there are numerous political demonstrations due to the upcoming European elections, the various italian political parties have rented squares and places to perform their activities election . But the children who were armed with lightsabers did not know and could not have imagined that their heroes , who in the film eventually defeat the forces of evil always , they had not reckoned with the incredible mesh of Italian and Roman bureaucracy .

The bitterness was very large, in front of the crane which debunked what was even finished editing . Someone took it out on the organizers who were too naive thinking that the Rebels of the galaxy could find a place in the ruins of the Roman Empire . But Rome evidently preferred to join the Empire and crush the Jedi philosophy .

Meanwhile …. in a galaxy far, far away there’s news .

The news dell’ufficializzazione cast (or a good part of it) of ‘Episode VII of the Star Wars saga is attracting the attention of fans, waiting for news’ from director JJ Abrams and in defiance of the Los Angeles City Council (who in 2007 chose May 25th as Star Wars Day, in honor of the thirtieth anniversary of the first showing of the first episode of the series), promises a truly historic day.