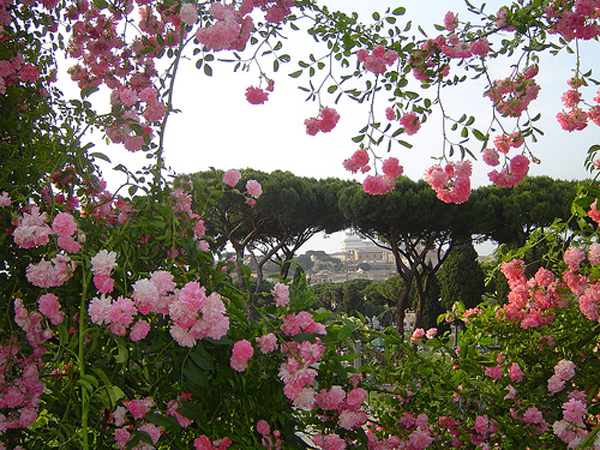 From 21 April to 15 June will be possible to visit the Rose Garden, one of the most fragrant of the Capital!

The Municipal Rose Garden is located in one of the most beautiful places of the city of Rome, on the Aventine Hill, overlooking the Circus Maximus and Palatine Hill.

The garden with 1,100 species of roses from all over the world, even from China and Mongolia.

As per tradition, this year the Municipal Rose Garden opened in all its splendor in the month of blooming roses.

In May, will also host the international competition to crown the most beautiful roses, which rewards new rose varieties obtained by Italian and foreign breeders.
The event, now in its 72 th edition, regularly attracts enthusiasts and botanists from all over the world and will be held May 17, 2014.

From May 18, also the area of ​​the Rome Prize competition is open to the public has the opportunity to see the new varieties of roses in the competition.
Schedules are subject to change. For more please check by calling the hotel.
The rose garden is open to people with disabilities.

The thousands of roses exist between species and varieties , are generally divided into three major groups whose boundaries can sometimes be vague : Wild Roses , Old Roses and Modern Roses .

The Botanical or Species ( also known as Wild ) are the wild roses that grow in various areas , from the hottest to the coldest , but only the Northern Hemisphere . Probably existed before man ( Oregon was found a fossil of a leaf of rose dates back to forty million years ago) , if they know their first 150-200 species and hybrids. Only a few of these , however, are the progenitors of the tens of thousands of roses between ancient and modern. They are divided into the following sub-genres : Hultelmia ( Simplicifoliae ) , Hesperhodos , Platyrhodon and Rosa , the latter ordered in the following subgroups:
Chinenses ( indicae ) , Banksianae , Levigatae , Bracteatae , Pimpinellifoliae , Synstylae , Cinnamomeae ( Cassiorhodon ) , Carolinae , Gallicanae , Caninae , Villosae , Rubiginosae .

To the category of the old , belong many roses that are grouped into classes according to their origin. They are often the result of spontaneous crossings between botanical roses that man, unwittingly , did meet in his travels across the world. Sometimes they are the result of the first experiments in the field of hybridization , begin from the early decades of the nineteenth century . Here are some representative groups :
Gallic , Dawn, Damascene , Centifolie , Mossy , eglanteria , moschate , Borboniane , Rugosas , thorny , Chinenses , Hybrid Perennial .

In the vast and generic category of “modern” are inserted many varieties obtained by man since the end of the 800, when it began to be used for crossing the roses that the British had brought from China and other Far Eastern regions with shiploads of tea (hence , probably , the name Tea) . The progenitor of modern roses is therefore the Tea Rose (R. x odorata ) result of the crossing between the R. gigantea and R. chinensis . Then crossed with Borboniane Hybrids and Perennials , gave birth to the Hybrid Tea (HT) .

– HT ( Hybrid Tea )
HT is the characteristic of the roses long stem on which they are taken one or a few flowers in the shape of elongated cup ( are Hybrid Tea , for example, cut roses that you buy from the florist ) . Another important feature is the re-flowering , almost continuously , from April to the end of February.

– Floribunde
Even Floribunde have “blood” of China, are in fact the product of the intersection of HT roses and roses Polyantha , in turn the result of the crossing between R. Multiflora and R. chinensis Minima . Roses Chinese have definitely re-flowering , but the appearance , in comparison to HT , it is different : the flowers are in bunches and smaller. Lend themselves well as roses border and to get color effects .

Other subclasses belonging to the large group of modern roses are the following :

Represent a new family of David Austin English roses dall’ibridatore obtained , since the sixties, and included in the group of shrubs. As the latter, in fact, are the result of the intersection of old roses and modern roses . Of the top have the scent , the gait, the shape of the flower and the colors often tenuous . Of the second repeat flowering .

– Rose falling or Ground Cover
These are also included in the group of shrubs. With their subtle and supple branches are adapted to cover walls or fences , also thanks to the weight of the flowers. Poste plan become ” ground cover or ground cover ” proposing, when they are in flower, suggestive effects .

– Miniature Roses
Also known as ” Lilliputian ” , have emerged in recent years because it is easily cultivated in pots and then adapted to adorn terraces and balconies. They all like the ancestor ” Rouletii ” variant of R. chinensis Minima, accidentally discovered in Switzerland by Major Roulet in 1918 and cataloged by the Genevan botanist Henri Correvon who introduced in 1922.

– Rose Patio
Intermediate class between the thumbnails and small floribunde . Again, these are grown easily in pots. In the garden can be formed in a small hedge and fun .

wrep.eu
One comment to “Tempo di rose a Roma”