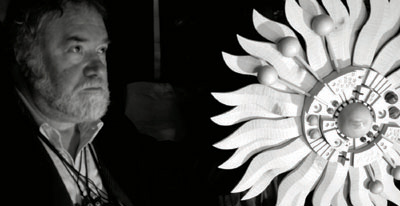 Codognotto is a real institution in Rome. Since he was born in Veneto (the north-eastern part of Italy), he is not Roman, but he moved here many years ago. During this period he has greatly contributed in bringing international honors to the city and becoming one of its most important and loved citizens. 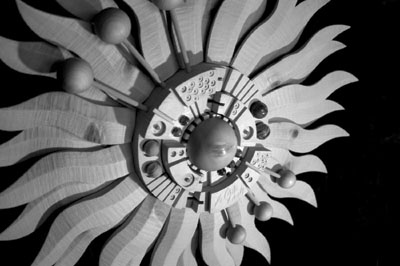 He is a wood sculptor who owes his success to his expressive language and the simplicity of his preferred material, ‘cirmolo’ (a type of wood), which he feels resembles his natural attitude: ‘We are both strong and resistant, but at the same time malleable…wood is a simple material, totally natural’. 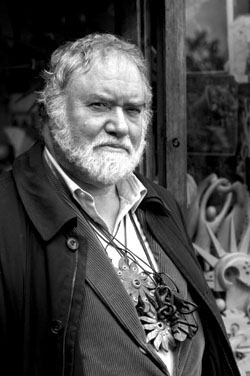 Codognotto has a particular view of life in which a magic and even religious presence coexists without colliding with the technological one; he gives life to a ‘world’ where past and present, nature and science compete each other. That’s also why he has chosen to use a natural matter such as cirmolo and use it with the most innovative techniques of an electric saw instead of the traditional chisel. He perfectly seizes the duality of our world and tries to represent it in the most harmonic way.

To better understand his philosophy we can think back his beginning dividing it into four fundamental movents; the first is the fairy-tale trend which is characterized by the gigantic ‘technological Pinocchio’ dating back to 1980. In this work Codognotto gives life, just as Collodi, to the natural wood from which springs a boy with extreme and ironic forms.

The second movent is the naturalistic trend in which the artist is focused on the natural world of flowers, trees and animals, as well the sun and moon; his technological trend characterized the next step of his interior evolution. In this phase, nature and mechanical instruments, rather than excluding one another, find a point of contact generating chimerical machines with bizarre features, enormous alters erected to celebrate the vital energy governed by a human’s mind. The most representative works of this period are the Technological Totem, the Technological Brain, and the Technological Unicorn.

The fourth phase is characterized by strong religious feelings whose best representations are the Maternity, the Lovers and the Angel.

Codognotto has met with great success abroad. His works are particularly appreciated in Japan. Just to cite some episodes of his great career, he was present at the Sevilla expo in 1982; his Halley’s Comet was presented to the Pope in front of an audience from NASA, ESA and Intercosmos scientists. Some of his works adorn important buildings such as the Bank of Italy headquarters in New York and Rome.

Apart from all his success, Codognotto is a very pleasant man with whom it is very nice to spend some time speaking about everything inside his studio, where it is nearly impossible to make a move owing to the many works that are crammed inside. 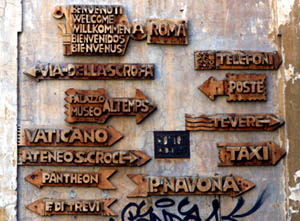 You will easily recognise the place because nearby on the walls there are many street signs that pop up at every step, bearing the unmistakable stylistic elements of this unique artist!ort and fashion was obvious, and society opted for the latter: heels on shoes that were not shaped, but straight.