The roman artist, Valerio Villani, after various experience in Italy, he show up in Europe. After years of experimentation and study, preferring the watercolor, he came to a creative maturity that finally result the public reach his dimension.

Appear real what that is not real. Villani represents an interior reality without space and timeless, as in the years after the world wars between neorealists and informals. His art amplified, acclaimed and his echo comes to us.

Bodies lose their real earthly form for fluctuate in this space. Disorientation brings us back to today’s state of uneasiness and instability, reminding us of our fragility. Valerio Villani could be nominate the artist who paints our time. He paints the man fears, the afraid not to arrive, not to be aloft; we find them all in those light and shaded colors where there is the disintegration of the mind. That unfinished feeling tells us the man in the cage of his thoughts. 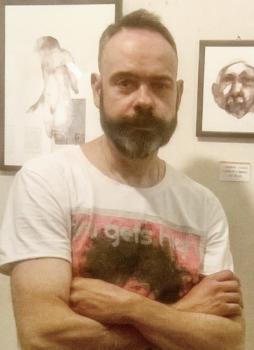 1) When have you understood that your emotions should be shown through the painting?

When I was a child.

I was drawing and colouring for hours, I still keep hundreds of blocks of sheets drawn by me from 3 years old. I was copying initially drawings from the comics that I was reading so as photo on reviews (animals, fishes, plants with trees etc) then to begin towards seven/eight years old to draw by memory (or imagination) all that was interesting me to express. It was from child, and it is still going, the way that I preferring to the personal emotions communicate with the world, above all that more profound. Draw these when i was child, or to paint today, is for me necessary

2) Do you perceive from your work that your main concern is the human being, because always in solitude?

The human figure remains for me one fountain of important inspiration, his ‘being’ and to ‘become’ in continuous and cyclic way in the world belongs to me that it are how to be a human than like contemporary painter. ‘Becoming’, cyclically and continuously, that ‘chews’ persons and things without truce is the element that I feel as ‘murmur’ of foundation in our being in the world and it is what touches me in the mind and generates restlessness. Just the anxiety that drives the human soul in its existence is for me the ideal ground for communication with those who look at my work. I am a son of the twentieth century, of the twentieth century of Heidegger and Nietzsche for precision, where man was brought to flesh and not to intellect. The words by Heidegger, quoted by my professor of ‘aesthetics’ (Prof. Raffaele Simongini) at the Academy of Fine Arts, is very well represented by my painting, “The newly born man is already old enough to die” (Heidegger, 1927). My fears are the same of all human beings, the horror vacui of contemporary man who looks at why it belongs to everyone as well as his condition of solitude that leaves him alone, among other human beings alone , to face the next step in his journey. Loneliness is naturally translated, in the subjects I paint, with the total absence of elements that can be attributed to reality, the human being, while in shape and size, is only in his reality and remains when it comes into contact with ‘dark windows’

of geometric shape that includes ideal spaces opened to nothing. What I represent really wants to be a positive warning, to make reasoning without a faculty of intelligence evocative and emotional about the condition of contemporary human being that must be necessarily altered if we want to be considered far more than ‘potential carcasses’ (F . Bacon, Sylvester, 2003,42)

3) You have written several times that you have been inspired by old Masters such as visionary William Blake or Francis Bacon or still in “the blue period” of Pablo Picasso. Many of their works send us fear, torment, weakness, restlessness. Are you interested that what the spectator can try in front of your painting?

Not particularly as I paint or better, I don’t paint for the spectator, but for my need of communication to the viewer. What then my picture can inspire is certainly a return factor to consider but I do not put it at the centre of my work. I often surprised by the impressions that are reflected on my work, impressions I have to say never trivial or ‘easy’ that very often open my figurative reality to different meanings and equally interesting. My painting is born free of superstructures and freely should be transposed by the viewer.

4) What do you think about being an artist in Italy, especially after having had many experiences

The Art market is conditioned. Now everything has a price. Spaces, time, visibility, exhibition

opportunities now have a price, and if you want to “walk”, you always have to invest something.

Now in Italy we are no longer surprised, we have no sensitivity to the new languages and where it

is made possible this becomes a “underground” phenomenon for a few. In Italy there is now the

and expressive languages that are part of it. In Europe, there is a greater ‘new feeling’, a different

opening and an honest search for emerging artists. With a few pounds or dollars (and in some cases

at no cost) you can have a critical reading of his work by Art Directors of galleries. In Europe, there

specifically, with times similar to those of the world of work. You feel less ‘the Art Market’ in the

galleries in Europe where you can still do ‘Art in the Market’. In Italy, artists do not give in to what

5) Over the last few years, your career has gained merit and this year, as well as arriving second

ranking by critical jury at the LXI Cascella Prize, the english magazine Average Art among the ten

international artists present on August and September 2017 has selected you. What do you expect

To grow as a man and artist, continuing to promote my work in Italy and Europe. 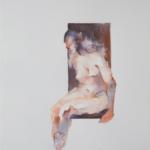 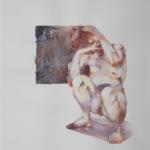 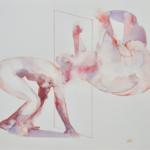 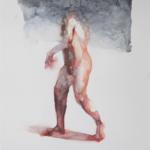 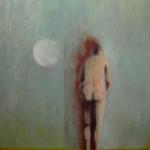 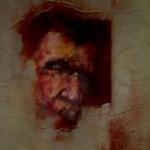 Valerio Villani Bio
Born in Rome, with a particular predisposition for drawing. Thanks to his mother, preschool teacher and painter in hobby, he approached with increasing interest in the Art World began to paint. He’s graduated Graphic Designer and he made collaborative working with advertising agencies in Rome following at the same time, the professional courses of painting techniques such as oil and watercolor. Since 1998, Valerio moved to Viterbo, where He’s continuing his intense artistic activity. He participated in numerous group exhibitions of contemporary art, and he studied in the publishing field, following the techniques of illustration workshops by international artists (Disney Publishing). Valerio Villani obtained a Bachelor’s Degree in painting at the Fine Arts University “Lorenzo da Viterbo.” From May 2014 he’s the President and teacher in staff of a Cultural development Association of fine arts in Viterbo (Italy).

Roman and lover of my city. I recently graduated in Cultural Heritage Sciences and now registered at the faculty of Art History. After attending a course in Bologna as a curator, I would like to undertake the career of curator and cultural promoter. Today I have the opportunity to collaborate with artist Valerio Villani as a curator; I continue to study and try to promote cultural initiatives in my city. Art for me has no time limit, love for art goes from Lascaux paintings to the last Venice Biennale.