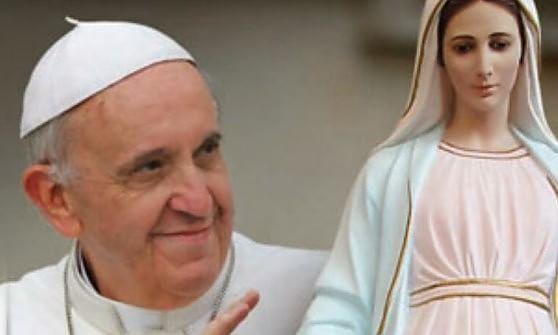 “Dear children, unfortunately among you, my children, there is so much struggle, hate, personal interests, selfishness. My children, so easily forget my Son, His words, His love! Faith is extinguishing in many souls and many hearts are captured by the material things of this world. My motherly Heart knows, however, that there are still many who believe, who love, who try to get as close as possible to my Son; who seek my Son tirelessly and so also seek me. They are the humble and the meek, who silently bring their pains and their sufferings, with their hopes, but above all with their faith. They are the apostles of my love. My children, apostles of my love, I teach you that my Son does not ask so much incessant prayers, as much work and fervor, he asks that you believe, that you pray, that through your personal prayer you grow in faith, that you grow in love. Love one another: this is what He asks for, it is the way to eternal life. My children, do not forget that my Son brought the light into this world, and gave it to those who wanted to see it and welcome it. Be you those people, because that is the light of truth, peace and love. I guide you maternally so that you may adore My Son, that you may love my Son together with me; so that your thoughts, your words and your works are always directed towards my Son; so that they are directed to His Name. Then my Heart will be full. Thank you!”.

In this message of Our Lady of [amazon_textlink asin=’8893183072′ text=’Medjugorje’ template=’ProductAd’ store=’it’ marketplace=’IT’ link_id=’b0d09f9e-110d-11e9-b545-4f107e001c0b’], the first of 2019, Our Lady is conformed and seems to follow the words of Pope Francis in his first general audience at the Vatican, which took place on the very day of the apparition in Medjugorje on 2 January!Our Lady focuses her message on the hatred that is present among the people in the world, the times, the wars and the human wickedness, that leave no room for love for Jesus and that suffocate and suppress faith!

And in the same way in which the Pontiff expressed himself: “better atheists than hypocritical Christians” … ” People who go to church, stay there every day and then live hating others and talking badly about people are a scandal: better live as an atheist rather than give a counter-testimony of being Christians “, Our Lady says to address her son with sincere prayers that come from the heart and not rivers of useless words, with dry prayers! The very same admonition made by Pope Francis to all the Catholics!