Sunday, March 22nd, with live broadcast in 65 countries, a legendary

edition of the Rome Marathon is going to be celebrated in the heart of the Eternal city.

The 21st Acea Maratona di Roma, IAAF Gold Label Road Race, is going to be held on Sunday, March 22nd 2015. Start will be at 8:50 am from Via dei Fori Imperiali, near Colosseum, with the finish line placed there too.

Over 15,000 athletes have entered the race (registrations will close on March 5th). Over 8,000 runners are expected from Italy and over 7,000 from 110 countries. 65 disabled athletes have entered the race. The event will be broadcast live in Italy on RAI Sport, from 8.35 am to 11.45 noon CET. Live broadcast will be provided also at www.raisport.rai.it. Suisse TV rights distribution company Exora SA guarantees live coverage of 3 hours in 65 countries (coverage: Europe, Africa, Centre and South America).

Alongside with the marathon, also the traditional “RomaFun” will be staged. A huge non-competitive 5k, whose participation in recent years rocketed over 80,000. For the second time this year the finish line will be inside the Circo Massimo.

RACECOURSE 2015: THE FINISH WILL BE FROM PIAZZA VENEZIA TO THE FORI IMPERIALI

Acea Maratona di Roma 2015 racecourse is the same of last edition. The start and the finish line will be in Via dei Fori Imperiali. The start will be in the direction of Piazza Venezia while the finish will be in the opposite direction. The course, sliding average, includes 77 changes of direction (no elbows) and approximately 7.6 km of cobblestones. The half marathon mark is set at Via della Giuliana. The course touches many of the most important and famous Rome landmarks, among them: Bocca della Verità, Circo Massimo, Piramide Cestia, via della Conciliazione, Basilica di San Pietro, Piazza Navona, Piazza Venezia, via del Corso, Piazza di Spagna and via Nazionale.

THE ELITE RACE: AFRICA, EST EUROPE AND ITALY RACE FOR THE PODIUM 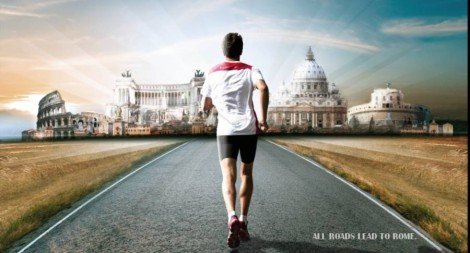 Acea Maratona di Roma has always been something more than simply a sports event. All over the route, a cultural, arts and music event will cheer on the runners as they struggle to the finish line: “Una città in festa“, a celebration involving the whole city and offering free entertainment to the audience for the whole duration of the race. This year, over 50 events will take place all over the route (see maratonadiroma.it). The leading event, as always, will be the International Folk Fest located at the Circo Massimo.

Since the last century and until 1991, there were several marathons in the Capital. After three years without a 42 k (1992-1994), in March 12th, 1995 the Maratona di Roma became the only one 42 kilometers of the City. The first athlete to write his name in the Hall of Fame is the Ethiopian Belayneh Tadesse (2:10:13). Other 5 Ethiopian athletes won the Maratona di Roma. One of unforgettable moments in 2010 when Siraj Gena won the race (2:08:39) arriving barefoot at the finish line to celebrate 50th Anniversary of Bikila Olympic gold medal and the last year winner, Getachew Terfa Negari with the second best time ever in Rome (2:07:56). In 1998, after the Ethiopian triplet, comes the first Italian success, signed by Stefano Baldini, who closed in 2:09:33. The Hall of Fame is dominated by the Kenyan athletes, in 1999 Philip Tanu was the first Kenyan winner and others 10 won the Maratona di Roma. Among these, Kiptoo Benjamin, winner in 2009 with the undefeated best performance on Italian soil: 2:07:17 and Josephat Kiprono, winner of the unforgettable edition of January 1st, 2000 (2:08:27). Two other Italians complete the Hall of Fame: Ruggero Pertile, winning the 2004 edition in 2:10:12 and Alberico Di Cecco, winning in 2005 in 2:08:02.

Italian athletes dominates the female Hall of Fame with 6 victories, than 5 Ethiopian, 3 Kenyan and Russian and 1 Estonian, Ukrainian and Algerian. In 1995 prevails the Russian Elena Sipatova in 2:37:46 and in 2008 another Russian, Galina Bogomolova, wins in 2:22:53, signing the best performance on Italian soil. In 1996 it is the turn of Ethiopian marathon legend Fatuma Roba closing in 2:29:05, she won the gold medal at the Atlanta Olympic Games the same year. Another Ethiopian marks the history of the Maratona di Roma, Firehiwot Dado, able to win the race three times in a row, from 2009 to 2011. In 1998 comes the first Italian success, by Franca Fiacconi, and the second one right away with Maura Viceconte the following year. In 2000 comes the first Kenyan victory with the 3 times Half Marathon World Championships, Tegla Loroupe, and world’s marathon best performance holder at the time. From 2001 to 2004 Italy rules: Maria Guida, Maria Cocchetti, Gloria Marconi and Ornella Ferrara in 2004 preceding her compatriots Bruna Genovese and Rosalba Console. Ferrara’s the last Italian victory at Maratona di Roma. 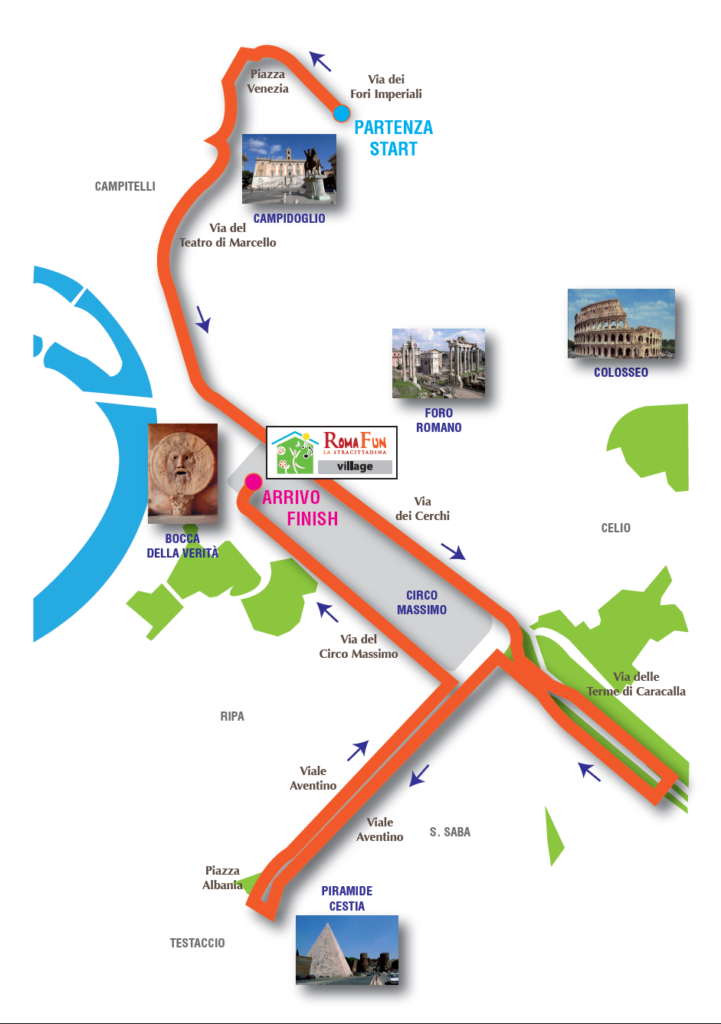 THE ROUTE: DEPARTURE FROM IMPERIAL FORUMS, ARRIVAL AT CIRCUS MAXIMUS

The path of RomaFun, the derby 5 kilometers which involves tens of thousands of people, is almost totally flat and win the heart of imperial Rome. Following the departure of the marathon from Via dei Fori Imperiali, then for 1.5 kilometers follows the route of the marathon past the Theatre of Marcellus, Mouth of Truth and along the Circus Maximus. Continue straight for Via delle Terme di Caracalla, returning on the path of the marathon until it reaches Porta San Paolo and the Pyramid, then return in the historic center in the final stretch with the arrival in the Circus Maximus.

The non-competitive 5 km expect over 80,000 participants. Race numbers and kits (8 euro with T-shirt Official New Balance) can be purchased at the Marathon Village. Also this year, with the RomaFun Dog, will be involved dogs and their owners on games and mutual respect. The RomaFun Village, finally, will be set up at the Circus Maximus (free) where you can taste the products offered by the partners of the event and attend performances are planned for this day, from sports activities to those recreational.