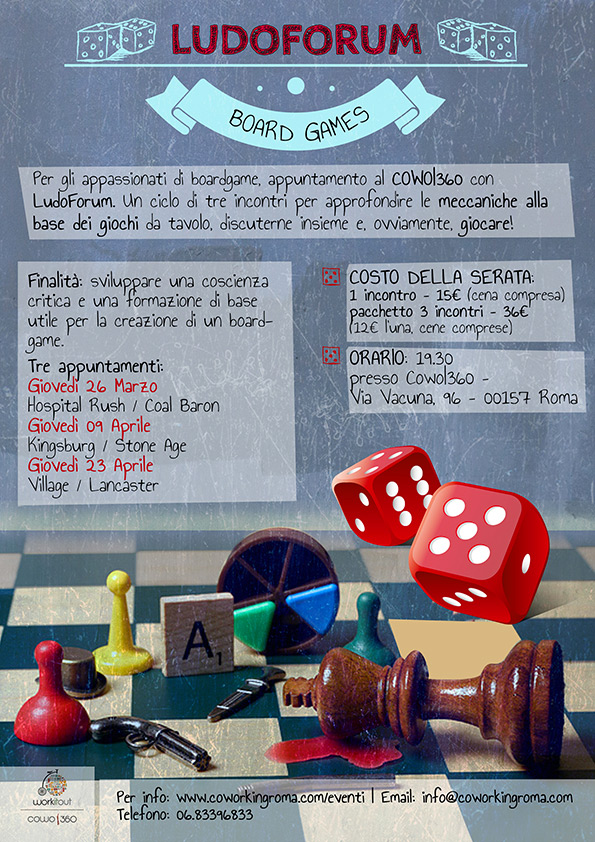 Cowo | 360, coworking and events space in Rome, hosts and promotes the first LudoForum!
LudoForum project conceived by Daniel Ursini, Lorenzo Maria Conti and Camillo Quatrini, experienced players who have collaborated in the organization and management of numerous fun fairs throughout Italy; their goal is to form a board games culture and publish the hobby that fascinates them.

Role-playing games and board games lately are having a great success and a subsequent spread: there are 350 new games published on average every year in the world, even complicit crowdfunding platforms that develop campaigns to participate in the creation and in launch of new games.

LudoForum arises from the need to offer a kind of fun training; it will possible to choose from a selection of titles and play together, and in the second part of the evening have the possibility to analyze the most significant aspects and dynamics of the games and the choices of the author. It will be possible to learning with fun, putting on the table our own ideas and having the opportunity to having a debate with the other participants.

LudoForum is a short cours (the first appointment is in March 2015, Thursday 26; the second one and the last in April 2015, 9 and 23) with the aim to investigate the mechanics of “worker placement and management resources” through a gradual increase in the complexity of the games offered.

Each meeting will be divided into two phases: the first will be played on one of the selected titles with the support of industry experts for the explanation of the rules below will develop a debate on ideas collected during the game.

The proposed route is thought to be accessible and fun for everyone; the first rule is to have fun, and for this reason during the evening you will dine together, so as to enhance the convivial atmosphere.

Here are the games that will be proposed during the meetings:

For info and reservations: