Today we are inaugurating a new column: the locations of Italian films … Walking around Rome in one of the places where Ladri di biciclette (The Bicycle Thief) was filmed, by Vittorio De Sica (1948).

The search for the stolen bicycle starts from the Piazza Vittorio market. More precisely, the place where Antonio and his son meet Baiocco (played by Gino Saltamerenda) and his colleagues look for the bike in Via Foscolo. From the images it could be noticed that some sides of the square were still occupied by the sellers of bicycles and used tires, then transferred to Porta Portese. From noticing also the traco practically null on the square and the two-axle tram in service on Line 14 (Piazza Esquilino – Piazza Lodi):

An anecdote is also linked to this location: a fifteen-year-old, a certain Ettore Scola, discovered his cinematographic vocation after having accidentally stumbled onto the set of the film in Piazza Vittorio. It is Scola himself who tells it:

“One morning, going to school, I found the square busy because they were shooting a movie. What struck me was De Sica. He was whispering in the megaphone. Because Vittorio never screamed, he made recommendations to the two actors: “here you take your son by the hand, he crosses the square” … And there was this beautiful voice of Vittorio who did not direct a film, directed a square, directed the movements of people , directed the feelings of these people “.

If we think about it one of his most beautiful films, C’eravamo tanto amati (We All Loved Each Other So Much) (1974), is dedicated to De Sica. But there is not only the presence of Vittorio himself who explains the anecdote giving reason to the characters of Nicola, there is just Nicola, played by Stefano Satta Flores, a non-protagonist character but key to the story, who, selected for the tv transmission “Lascia o Raddoppia (Leave or double) ?” by Mike Bongiorno, gives the right answer precisely because of a misunderstanding about the making of the film which he knows well but which the jury of the program ignores and for this makes him lose the prize money. 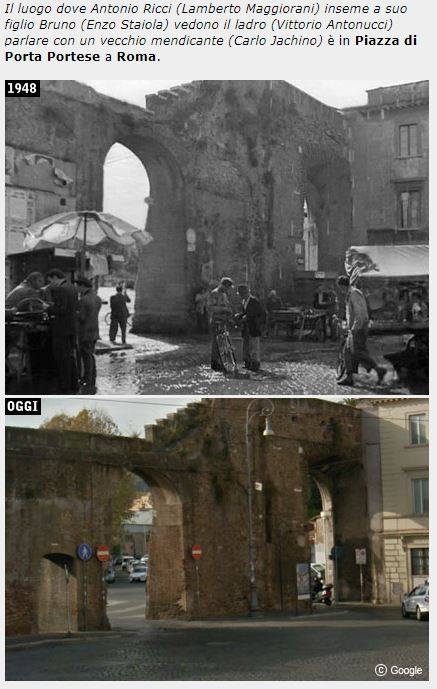 The place where Antonio Ricci (Lamberto Maggiorani) and his son Bruno (Enzo Staiola) see the thief (Vittorio Antonucci) talking to an old beggar (Carlo Jachino) is in Piazza di PortaPortese in Rome, where the plaque of the photo is present .

Source of reconstruction of the places of the set:
https://www.davinotti.com/index.php?forum=50000115