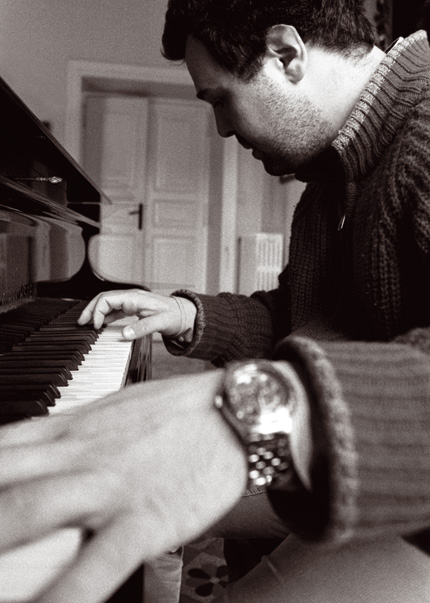 The stereo is spreading Jazz music. A grand piano in the middle of the room – newspapers, books, compact discs, and above all the friendly face of Giuliano Valori, a musician who’s making his way in the field of jazz.
At the moment Giuliano is both a piano teacher at a famous music school in Rome, in Monte Sacro, in the Centro Didattico Musicale. He is an artist whose time is taken up by creating new compositions with jazz sounds. That’s his dream: playing his own music. 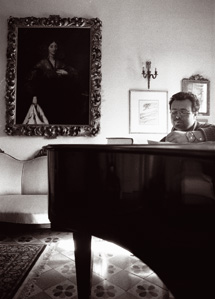 When did you discover your love for jazz?
I began studying classical music when I was a child, but I was also very fond of other kinds of music. At the age of 16 I fell in love with jazz, but I thought it too difficult to perform. I was afraid to improvise something and letting my feelings emerge through the piano keys. But when I met Keith Jarrett in concert, in November 1990, something burned inside of me: a sort of inner “explosion” which opened my eyes clarified my ideas . I kept on listening to jazz, discovering the “greats” such as Gershwin, Duke Ellington, Jimmy Van Heusen, Rodgers & Hart,  and in the meanwhile, I turned to rock music. I needed to experience as much I could if I wanted to say something through music.
My friends and I used to play together in a band, performing famous rock songs during school concerts and, after, in the pubs. I found great amusement playing with friends, even at home.

What do you like about this kind of music?
Well, first of all, jazz communicates feelings and emotions that display my inner self.  Besides, at present, jazz represents a lot of things and because of this aspect, this ‘trembling boundary,” jazz lets my creative imagination go wild. At the moment I’m studying the European roots of jazz and I love that the “classical” and “eternal” melodies suggest that if music is good, it is always new, and it always has something new to say.

Any suggestions for listening to good jazz in Rome?
The first place I would say is “La Palma Club,” there’s enough space inside and the prices are good. But perhaps the better acoustic space is the Auditorium Parco della Musica, where good jazz concerts are held.

What about your present life?
Well, after a series of concerts with different bands performing rock music in pubs, at “feste dell’Unita’ and in different towns of Italy last year I began to perform a show made up of the music and songs of the famous Italian singer, Giorgio Gaber, as well as the famous songwriter Jacques Brel . The tour had good success especially in Umbria, during the ‘Todi Arte Festival,’ and the show was performed last autumn during the Roman ‘White Night’ in the ‘Auditorium di Mecenate,’ in the very center of Rome. At the moment I teach piano.  I’m preparing other concerts, and  above all, I am making my own music. And I want to believe in my dream, to one day see my music being enjoyed.

Now Giuliano is sitting in front of his grand piano and playing a song that sweeps me away and lets me feel happy. Thank you very much, Giuliano.
By Alessia Angeli