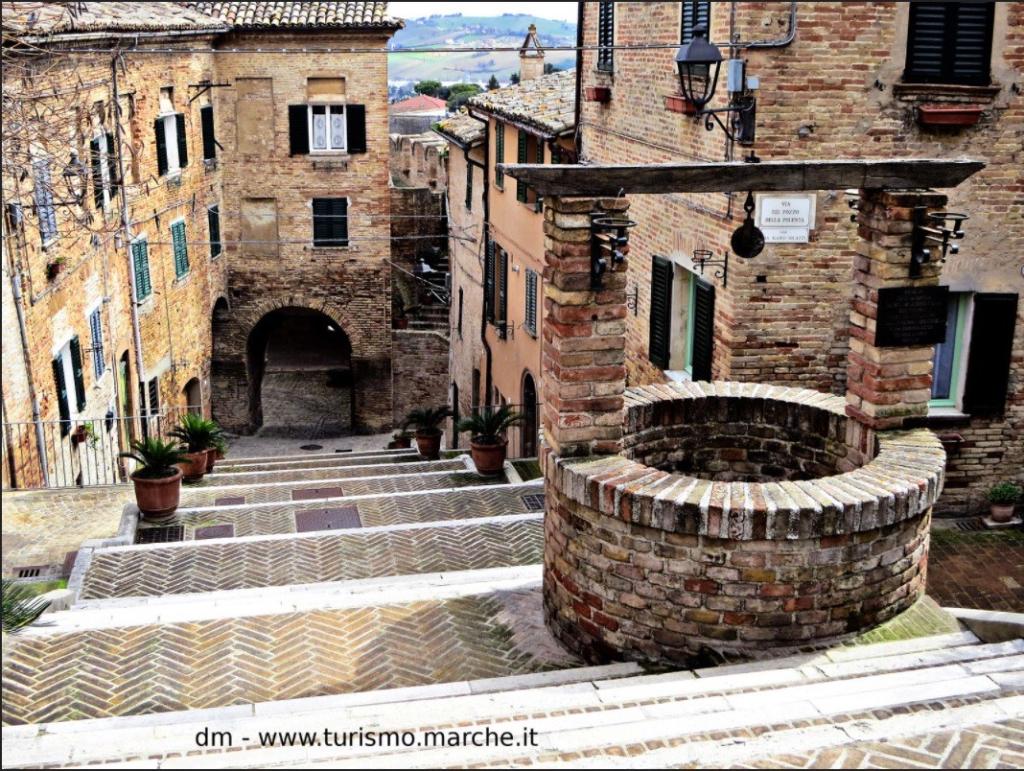 Slow-moving Spiritual Tourism is back in the Marche, from Corinaldo to Recanati, Loreto and Urbino, passing through the castles of Arcevia, Genga, the Frasassi Caves and the marvellous Velvet Hills.. 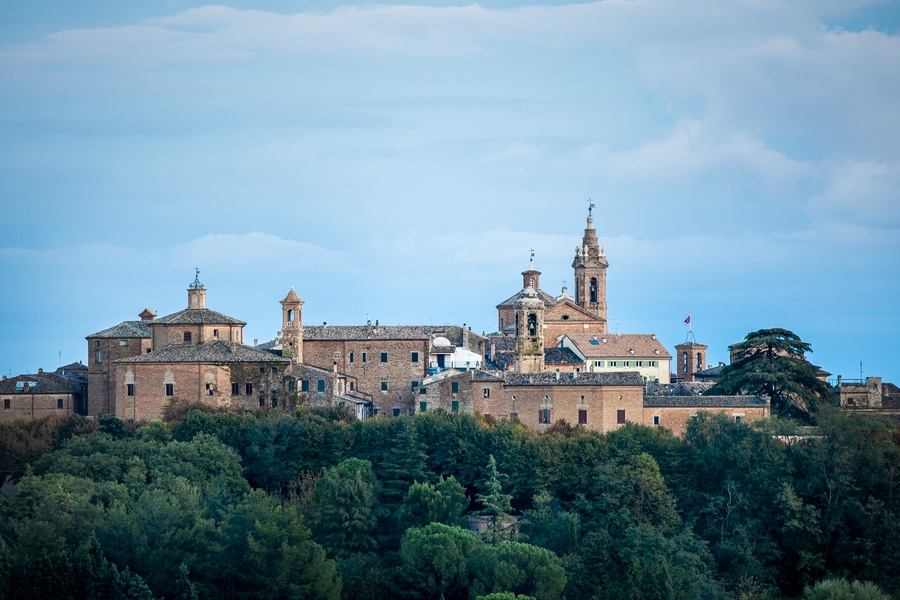 Officially named the Beautifulest Village in Italy in 2007 and included in the top places in 2021, Corinaldo (AN) in autumn 2021, after an articulated process of revaluation and enhancement, relaunches 10 Gorettian itineraries, offering a new route of Spiritual Tourism to give space and offer a travel dimension to the many faces of spirituality. A slow-paced journey through mystical, symbolic and historical places in the cradle of culture and transcendence that is central Italy, with its wealth of stories, stories, anecdotes and unique views that inspired poets such as Giacomo Leopardi, Carducci and Pascoli, but also personalities such as Saint Nicholas of Tolentino, Santa Maria Goretti – who spent her earliest childhood in Corinaldo – and many others. 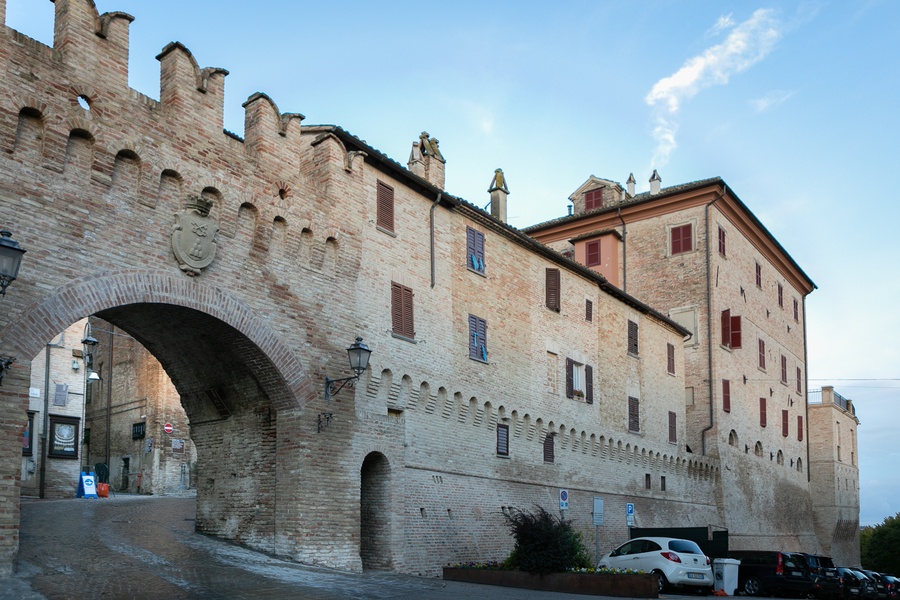 Starting from Corinaldo, passing through the famous Recanati, Loreto and Urbino, a UNESCO World Heritage Site, and arriving at the Castles of Arcevia, Genga, the Frasassi Caves and the evocative Velvet Hills: these are the stages of the renewed Goretti itineraries, places and spaces to discover the roots of the heart of the Bel Paese, but also to immerse oneself in a complexity of feeling that brings together Christian spirituality with poetic thought and more. Because, as the academic Carlo Bo wrote, “Le Marche lives in the air, suspended within an idea of poetry that is as free as ever, whereby even the history that has often been illustrious no longer has any specific weight and is absolved by another pronunciation of things”.

The Goretti itineraries start in Corinaldo (AN), the birthplace of Santa Maria Goretti, a village with an evident medieval tradition, rich in alleys and unexpected scorches, with its historical monuments and the Hall of Costume and Popular Traditions where 16th century costumes are on display, but also with anecdotes and stories, such as that of the cunning Scuretto or the Cannone di Fico that has earned Corinaldo the name of “town of the madmen”. 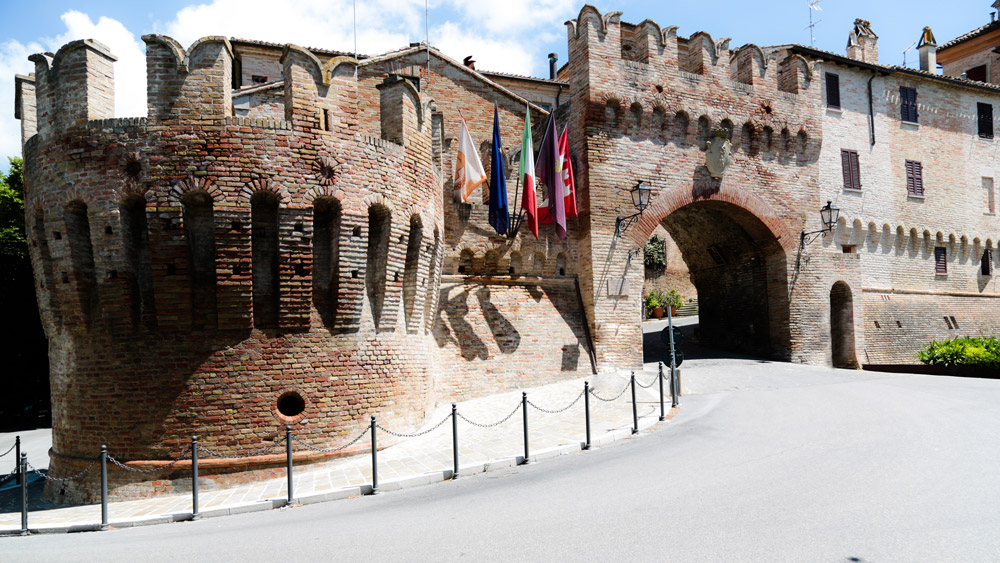 Among the itineraries, just a short distance from Corinaldo, there is the first ecclesiastical park in Italy: Terre di Senigallia – Fede Semplicità Bellezza, a project launched by the strong will of the Italian Episcopal Conference. An unusual park, to rediscover the area’s Christian cultural tradition, closely linked to rural culture and the artistic and cultural aspects of the excellences of the Marche. Amidst history, spirituality and art, stops along the way include the Civica Raccolta of art by Claudio Ridolfi, an important seventeenth-century artist who worked extensively here, and the Museum of Monastic Arts.

The route continues through the greenery of the first Apennines, through a land that hides wonders worthy of the best architectural treasures. Among these are the Castles of Arcevia, bouches that hide unexpected riches in which Guelphs and Ghibellines fought, as well as the town of Genga, known for its underground tour of the Frasassi Caves. Genga offers the possibility of visiting other places with a strong emotional and spiritual charge such as the temples carved into the rock, including the Temple of Valadier and the Church of San Vittore alle Chiuse.

Between Loreto and Recanati lies the third itinerary that allows us to discover one of the most important places in Christianity as the Holy House of the Virgin Mary, which according to tradition was transported directly from Nazareth.

The lands of the Duke of Urbino offer an immersion in the Middle Ages and the Renaissance, with Urbino as a UNESCO World Heritage Site . The masterpieces of Piero della Francesca in the National Gallery of the Marche and the house of Raphael but also Gradara are unmissable: a rather peculiar fortress than according to tradition it was the setting for Dante’s love story between Paolo and Francesca .

The tour among the four villages most beautiful in Italy includes Corinaldo “country of the mad”, Offagna with its splendid walls built for military defense, Mondolfo which presents the church of San Gervasio di Bulgaria and Mondavio which offers a reconstruction faithful of the court life inside its medieval fortress

The marvelous Velvet Hills are one of the focal points of the medieval and bucolic culture of the Marche region, on which you pass by villages and characteristic medieval views such as Ostra and Ostra Vetere with real pearls of the Renaissance.

A total immersion in spirituality and monastic life in compliance with prayer times. Finally, this is offered by the itineraries of the Hermitages and Monasteries of the Marche and the grand tour spirituality and meditation which starts from the hermitage of S. Maria di Valdisasso in Valleremita up to the Abbey of Chiaravalle passing through the Sanctuary of Macereto in the Monti Sibillini National Park and Serra de ‘Conti , a small town in the Marche region that houses a fascinating museum dedicated to the monastic arts.