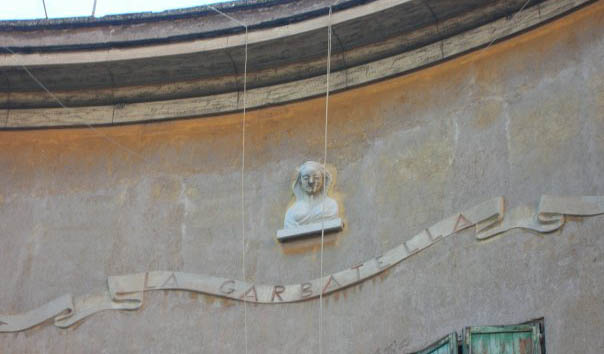 The historic district of Garbatella, the so-called “City Garden” in February 18, 2015 celebrates its first 95 years. In the district has already begun to celebrate through a full program of events, given the nature of the popular district all appointments will be free. There will be prizes, exhibitions and musicals and concerts, all organized by neighborhood associations.

The idea to celebrate the birth of the district created in 1920 by Mussolini, was founded about 16 years ago, namely in 1999, and now is an appointment of the district, and over the years the festival has become a city event and thanks to the contribution of the association “Tempo Ritrovato“.

The week of events will end the popular Palladium Theater where we will have the opening of the exhibition “Antique Radio” and the musical comedy, “On the waves of the radio: a story many voices” by the Association I.T.A.C.A (http://www.buoncompleannogarbatella.it/)

The “Garden City” born from an  architectural–philosophy idea that promotes housing in a community integrated context. The Garbatella is a district created to house people displaced following the demolition took by Benito Mussolino in Rome, such as the Bocca della Verità (Mouth of Truth ) and Via della Conciliazione a San Pietro (way of conciliation). The neighborhood, then away from the city, has given birth to various artistic and cultural personalities such as Roman  Maurizio Arena, Valerio Mastandrea, passing by Enrico Montesano, Victor Cavallo, Alberto Sordi, Enzo Staiola, Tiziana Foschi to more traditional interpreter of song Roman Alvaro Amici.

The district ‘was the muse of Pier Paolo Pasolini, Daniel Pennac, Nanni Moretti and many others.

The most illustrious and enlightened architects of fascist, including Gustavo Giovannoni, Marcello Piacentini, Del Debbio, Limongelli, Sabbatini, were inspired by the British architectural models, faithfully taking the inspiration of the dream of Owen of the “Garden City“, where ‘Urbanism is interpreted as container contents social, demonstrating in time how true the proposition for which – History is made by people and its rites, Signs and Symbols

Here is the program: The Garbatella celebrates 95 years …

INVITES CITIZENS TO FREE ENTRY (Info phone +39 3341166872 – www.rionegarbatella.it) to attend the presentation of the social, cultural and sporting activities in the area.

Homage to the history, the image and the passion of the Roman with the presentation of the book OUR WAY  History of the ring Ostiense. From Valle dell’Almone to Capitol Two Enzo Gori

FOR … “COURSES” GARBATI 2015
Presentation of the calendar of guided tours of the Garden city of Garbatella and “Courses” Diction, Singing and Photography organized by the Cultural and Sports District Garbatella

THE INITIATIVES OF THE TOWN HALL ARE:

February 18 ,12 am
Piazza Benedetto Brin
The Oral History becomes fairy tale recounts the origins of the Garbatella district in fairy tale
Organised by The Tempo Ritrovato

February 20 at 17
Oratory San Filippo Neri
Via Delle sette Chieses, 101
Memories in the drawer, Photo exhibition dedicated to one of the oldest football clubs Roman Astro
The exhibition will be open until 22 February.
Organized by the Cultural ITACA

February 22 at 11 am
Palladium Theatre
Piazza Bartolomeo Romano, 8
Exhibition of antique radios and presentation of a new prototype of musical instrument
Organized by the ITACA

February 22, 17:30
On the waves of the radio. A story so many voices
Musical Comedy Organised by ITACA

All events are free admission and free

i3factory.com
2 comments to “Happy Birthday Garbatella: a week of events for the 95 years of the district”