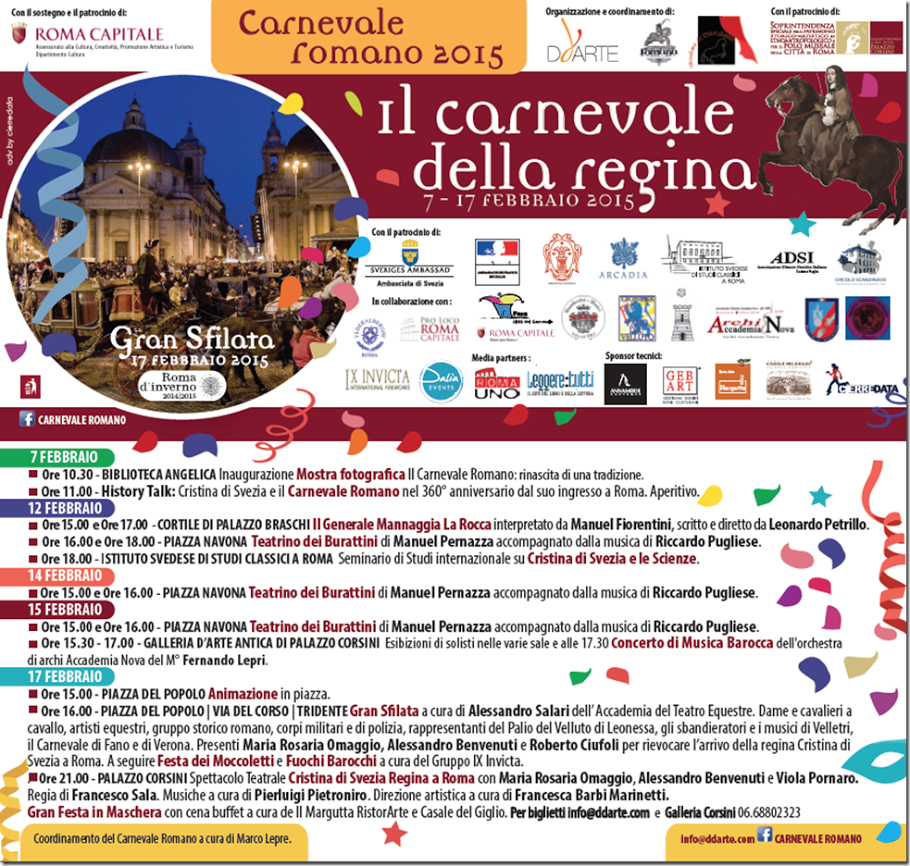 In February in Rome begins the Carnival, held 7 to 17 February 2015, the seventh edition of the Roman Carnival. 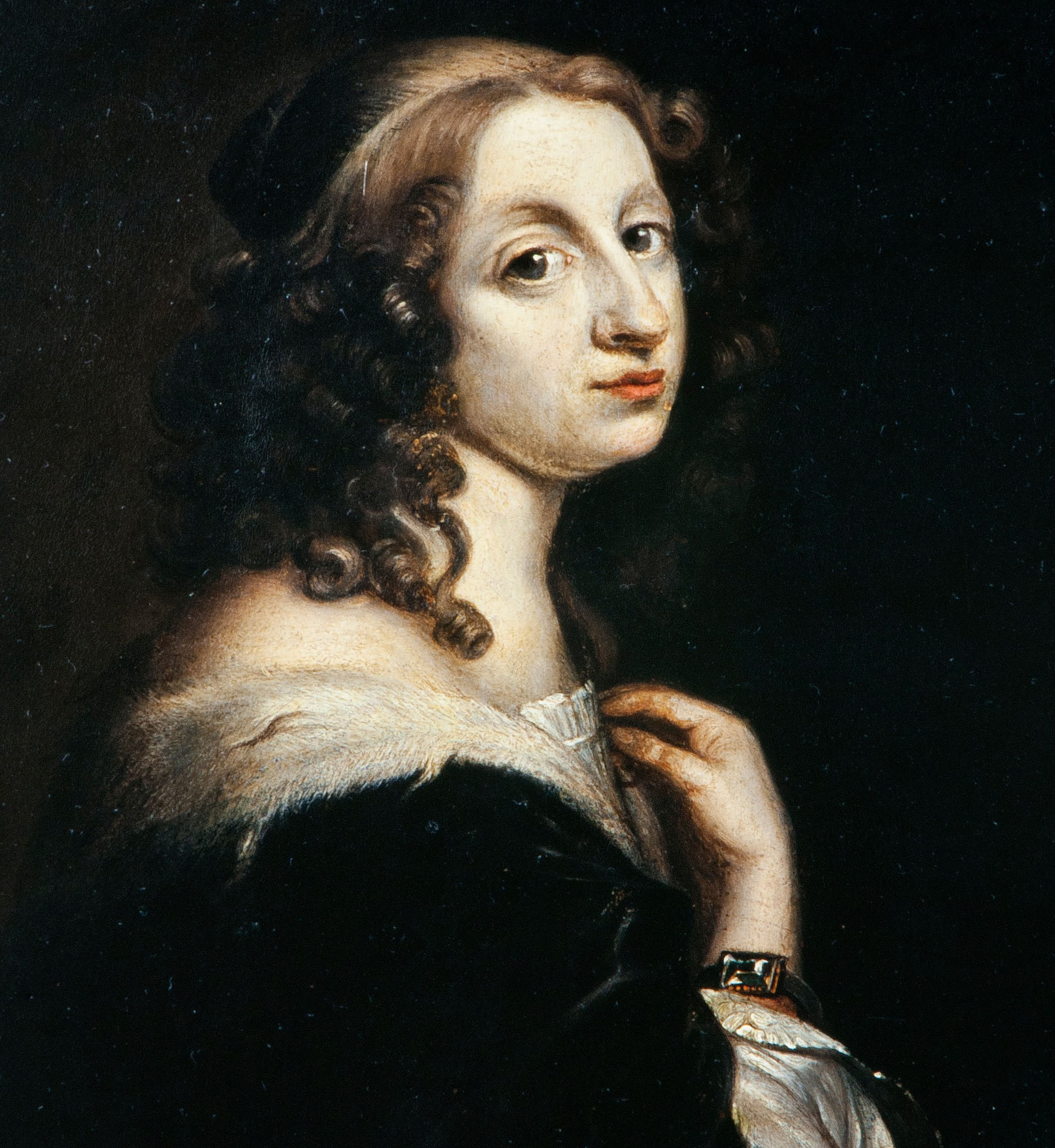 Carnival 2015 is the year dedicated to Queen Christina of Sweden on the occasion of the 360th anniversary of her entry into the capital.

It is expected a mask parade on horseback, a very early stage with Maria Rosaria Omaggio and Alessandro Benvenuti, different cultural conferences, concerts and “commedia dell’arte”.

On opening day of February 7 at 10:30 am, at the Biblioteca Angelica (Piazza Sant’Agostino, 8, 00186 Rome) has inaugurated the photo exhibition of Brokenlens Roman Carnival: rebirth of a tradition followed by the title from the history Talk Christina of Sweden to the Roman Carnival involving scholars, historians and representatives of the Arcadian Academy, one of the oldest and most prestigious institutions of Roman literature.

Thursday 12, in the courtyard of Palazzo Braschi, at 15 and 17, will be presented the show The General Damn La Rocca, written and directed by Leonardo Petrillo.

In the afternoon of Thursday 12, Saturday 14 and Sunday 15, from 16 Piazza Navona will be animated by the  Puppet Teatrino of Manuel Pernazza, the youngest Italian puppeteer. Sunday 15 to 17 of febraury, the National Gallery of Ancient Art in Palazzo Corsini hosts the concert string Academy Nova.

As per tradition, the heart of the schedule will be the Grand Parade Horse of Tuesday, February 17, 2015 which will start at 16 from Piazza del Popolo to grow in the same places of the great events of papal Rome Renaissance carnival.

For children, Saturday 7 and Sunday 8, the House of Theatres in the historic Villino Corsini in Villa Pamphili (address: Largo 3 giugno 1849) we have the lab–show The Magic Flute.

Children from 6 to 10 years will participate in workshops morning from 10.00 to 12.00, will be involved in the world of opera in which they will live all aspects, from makeup to the costumes, the orchestra rehearsals to those acting.

From 15.00 to 17.00, we will have the representation of the Magic Flute, the director-narrator Antonio Marziantonio and musicians of the Youth Orchestra of Rome who will wear the masks of the main characters of the work for a show for both adults and children.

Admission is free until all places available.

During the weekend will see the Circus Ludo. The event will take place in Testaccio Area, between the historic Piazza Santa Maria Liberatrice, and the new Piazza Testaccio after the restoration and moving the ancient Fountain of amphorae.

We will have circus and street art:

The detailed program is on the site www.scuolaromanadicirco.net 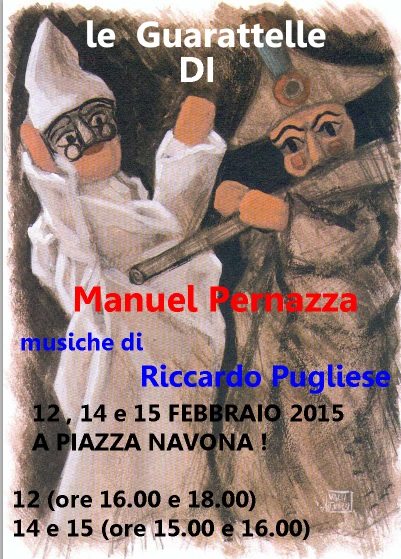 In the afternoon of Thursday 12, Saturday 14 and Sunday 15, from 16 to Piazza Navona we Teatrino Puppet Manuel Pernazza, the youngest puppeteer Italian, already awarded the Anima 2010, the last member of the oldest family of puppeteers and Roman ambassador Pulcinella in the world, accompanied by the music of Richard Pugliese.

Sunday, February 15, 2015 at 17.00 the concert string Nova Academy at the National Gallery of Ancient Art in Palazzo Corsini, but starting from 15.30 in the Museum is surrounded by baroque music asclota spledida ancient home of Cristina of Sweden.

The traditional parade and the main attraction will be the Grand Parade equestrian Tuesday, February 17 2015, which will start at 16.00 from Piazza del Popolo. Attended by over 100 horses, carriages, costumed figures, equestrian artists, historical groups, representatives buttere the region, cultural and historical symbol of equitation work of our country, and the military forces that have brought success to the history of the Italian cavalry.

Attended by a delegation of the Carnival of Fano, costumed representatives of the Leonessa Palio of Velvet , the flag-wavers and musicians of Velletri, the Group Musici di Torre Orsini, in addition to the traditional presence of the Gruppo Storico Romano.

Already from 15.00 in Piazza del Popolo flag-wavers, drummers and historical groups will begin to entertain the audience before the show. 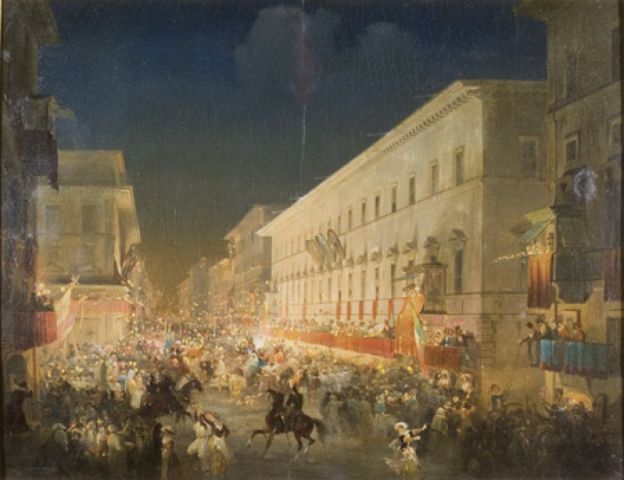 Traditionally, will be distributed free of fountains falistranti, so you recall the ancient Feast of moccoletti, who celebrated the closing of the Carnival on the evening of the so-called Martedi grasso (Mardi Gras – Fat Tuesday)

This festival, which took place on the evening of Shrove Tuesday, has always impressed foreign artists who attended. They were called “moccoletti” lit candles that the Romans, nobles and commoners, brought in via del Corso trying out the others and to defend its own; who could put out the light of others could take his mask. There was also also the freedom to insult the one who remained without flame. The carnival was extinguished with the dimming of the last snot and with the last supper of “Fat Tuesday” before the Lent that started the next day.

For closing in great a fireworks Baroque choreography drawn in the sky above Piazza del Popolo.

is a party that represents the end of the week of seven days of carnival called  “fat”. This period during which we celebrate, precedes Ash Wednesday marks the beginning of Lent and also why many people come to church for confession on this day. Many famous carnival parades take place right on Martedì Grasso.

Shrove Tuesday was the last day of the carnival, where you could taste the typical carnival sweets including the “frappe” Roman calls in other Italian regions also chatter, maraviglias, rags, lies, rags, Galani, sossole, crostoli , bows depending on the city and region of Italy.

Back the Roman Carnival, considered the largest equestrian event in Europe for the number of viewers, which in this seventh edition celebrates Queen Christina of Sweden on the occasion of the 360th anniversary of his entry to Rome from Porta Flaminia. Mask parades, plays, concerts in costume, commedia dell’arte, fireworks.

10.30 Opening of photo exhibition “Roman Carnival: rebirth of a tradition” by Broken Lens.

11.00 History Talk “Christina of Sweden and the Roman Carnival”.

The spectacle of the commedia dell’arte General Damn La Rocca, written and directed by Leonardo Petrillo.

The performance of the soloists

17.30 Concert of Baroque Music for Strings by Nova Academy of Maestro Fernando Lepri

Grand Parade Renaissance coordinated by Alessandro Wages Academy of Equestrian Theatre. Ladies and knights on horseback, equestrian artists, Gruppo Storico Romano, foreign military and police, representatives of the Palio of Velvet Leonessa, the flag-wavers and musicians of Velletri, the Carnival of Fano. Leading the procession Maria Rosaria Omaggio, Alessandro Benvenuti and Roberto Ciufoli to commemorate the entrance to Rome of Christina of Sweden. Following Moucouleti FESTIVAL AND FIREWORKS BAROCCHI by the group IX Invicta.

Piazza Vittorio Emanuele with the acrobats, jugglers and mask workshops and face painting. A full program with the best Italian talents selected by the artistic direction of MArteLive.

Macondo Theatre presents the show “The Roman Myths” by and with Alessandra Chieli and Francesco Petti, from “Roman Myths” narrated by Carola Susani.

Stilts and juggling with Irene Cross.

Laboratory of masks and face painting

Stilts and juggling with Leonardo Varriale

Final parade with children who participated in the workshop artists and percussionists Ivan Navarra.

Carnival 2015 in Rome: the events of the City of Rome

During this workshop created by Roberta Escamilla Garrison and Alice Drudi, edited by Eleanor Storm, children will mount a small show on the theme of ‘Carnival of the Animals’ and play with masks, props and music.

Reservations are recommended for laboratories: info@danzamda.it

Let’s get WORK: THE MAGIC FLUTE THE HOUSE OF THEATRES

Laboratory and musical performance dedicated to the famous Mozart opera “The Magic Flute”.

Laboratory activities, aimed at children aged 6 to 10 years, will take place from 10 am to 12 provide an engaging journey into the “behind the scenes” of opera from makeup to the costumes, the orchestra rehearsals in those acting. From 15 to 17 execution of the most famous arias from The Magic Flute performed by the musicians of the Youth Orchestra of Rome in an original show and fun for all ages under the guidance of “director-narrator” Antonio Marziantonio.

By Youth Orchestra of Rome

CONFETTI OF ART TO THE HOUSE OF THEATRES

Workshops for children from 0 to 13 years, divided into age groups: theater, music, storytelling, photography and animation. A whole day to live an artistic experience through moments of animation and theme workshops creative music, photography, theater and storytelling.

By Oratory of NPO

9:00 am and 11:00 am Entertainment theater children aged 6 years. From the tradition of masks of Comedy, a work by director Marco Paciotti, inspired Canovacci typical of the Companies of Art’s most famous’ 500: the I Gelosi, of Gourmet, the dazed. Five actors play a set of eight masks: Harlequin, Pantalone and Pulcinella, the Lovers Leandro and Angelica, Pedrolino, Captain Fear and Doña Apollonia. The show is accompanied by a lecture-show on the Comedy Masks and Tea towels.

In the picturesque setting of the Sala Santa Rita programming entirely dedicated to children with entertainment, educational workshops, and theater performances.

11.00 Children’s theater – Animation and laboratories with construction of puppets and costumes

16.00: Entertainment “It ‘s your sweet home” of the “Company Coop New Children’s Theater”

17.30: Laboratory of muppets and origami

from 11.00 to 14.00 pills show with educational workshops muppets

PROGRAMMING CARNIVAL OF LIBRARIES OF ROME

hours 9:30 to 11:30 Laboratory of construction masks and costumes from recycled materials creatively, by the association to make a game

17.00 “Run hastily carnival in the library waiting for you” readings, stories, games and pancakes …

16.30 “The Carnival of the small”, readings on Carnival masks and lab

16.30 Carnival Party. Afternoon of games, workshops, animated readings, entertainment and snacks for all

17.00 “Thursday fat fat … in BimBlioteca”, readings and games in the mask through the shelves. Treats and lots of fun with Giorgia D’Archive and Chiara D’Aquila

17.00 Activities carnival for children 4-8 years, “Carnival: the craziest party that there is” great fun for kids room with readings, music and games

hours 17:00 to 7:00 p.m. Laboratory building masks and costumes from recycled materials creatively, by association, by Artesana Onlus, in partnership with City Hall II

hours 9:30 to 11:30 Laboratory of construction masks and costumes from recycled materials creatively, by the association to make a game

From 15.00 to 18.00 The event, which already provides for Saturday, February 14 a program of readings, performances, and free workshops for children in collaboration with the Libraries of Rome, continues Sunday, February 15 in the spaces of the MACRO in Via Nizza with the musical performances of the band drums itinerant Caracca. The band, founded in 2006 in Ostia and made up more than twenty percussionists, will perform from 15 to 18 hours in the Museum of Contemporary Art of Rome, starting from the repertoire of Brazilian Salvador, Recife and Rio, involving large and children in a cheerful carnival parade with great parade of masks and costumes made from small workshop participants in libraries.

i3factory.com
One comment to “Roman Carnival 2015, in Rome parades and costume parties”