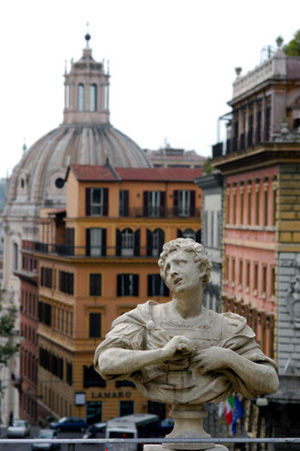 The History of one of the most ancient palaces in Rome standing since the XVI century
by Classe 3 A, Scuola Media Statale Via Rugantino, 91 – Roma

Villa Aldobrandini is located on a small elevation just south-west of Quirinale Hill. It is an ideal place to escape from public life and relax. Because of its quiet surroundings it was considered the perfect location for building such a villa.
This residential area was established during the Imperial era, but during the following centuries (after barbaric invasions in the dark ages) the land was primarily large abandoned fields and vegetable gardens. 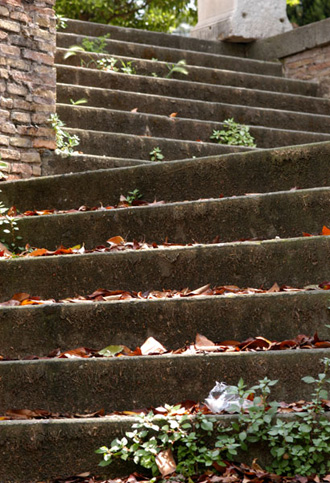 During the Renaissance, Rome?s recovery started to take shape and the wealthiest families competed in building villas, enriching them with statues and archaeological finds from the sites. In the sixteenth century, the Vitelli family acquired an area on the hill and named it Orti Vitelli (from the word for “vegetable garden” or “cultivated area”). In the contract, a description of a modest building was included and the Vitelli family decide to expand this construction and supply the necessary water for the garden. In 1600, the well-off Aldobrandini family, originally from Florence, reached the pinnacle of religious power with Pope Clemente VIII and bought Orti Vitelli for 1,200  Roman scudi (the currency of the time). In 1601, the Pope donated the garden and the annexed building, positioned over Costantine?s thermal baths, to his nephew, the Cardinal Pietro Aldobrandini who expanded and decorated it with a vast collection of ancient works of art. 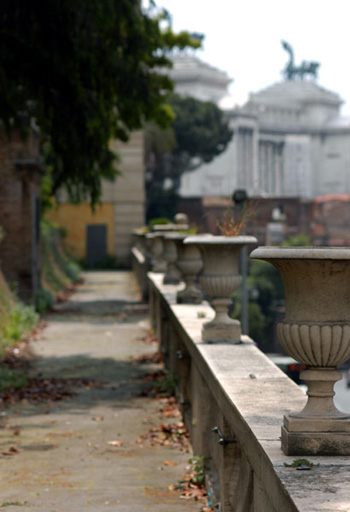 The Aldobrandini family then found themselves affected by a series of complex events; one of these was the extinguishing of the male line of descendents when Olivia Aldobrandini married Paolo Borghese in 1638. After being widowed, she remarried to Camillo Pamphili and the propriety passed to his family, and later returned to the Borghese’s.
During the years of the Napoleonic occupation, the Villa reacquired its old splendour due to Count F. A. Miollis, a general in Napoleon?s army and a governor for the Roman States.  He bought the Borghese-Aldobrandini Prince?s property in 1811. The Count adored having an assembly of the Roman aristocracy alongside the artistic world in his villa. In the chronicles of the time reports were found about a party given in honour of Canova and a social gathering, in which the Roman ladies danced the Saltarello and the Waltz (at the time considered a dangerous ?devilry? imported from France), was given.

The Count enriched the Villa with numerous paintings and transformed the garden into an archaeological park, but his stay ended in 1816. Successively, Prince F. Aldobrandini bought the Villa back from General Miollis?s heirs and restored it, not trusting the project to G.B. Benedetti, creator of Ninfeo di Venere (a nympheum: a fountain contained in a niche) which is still visible in the center of the courtyard overlooking via Panisperna.

With the Unification, Rome was proclaimed the capital, and in 1876 via Nazionale was opened. This road was commissioned to connect Termini station with the center of the city. This caused the reduction of the Villa?s garden and a notable lowering of the street level.
In the same year, two twin pavilions were built along the surrounding wall: one on via Nazionale and the other in Largo Magnanapoli, which originally had the entry gate to the Villa, and is now walled off.