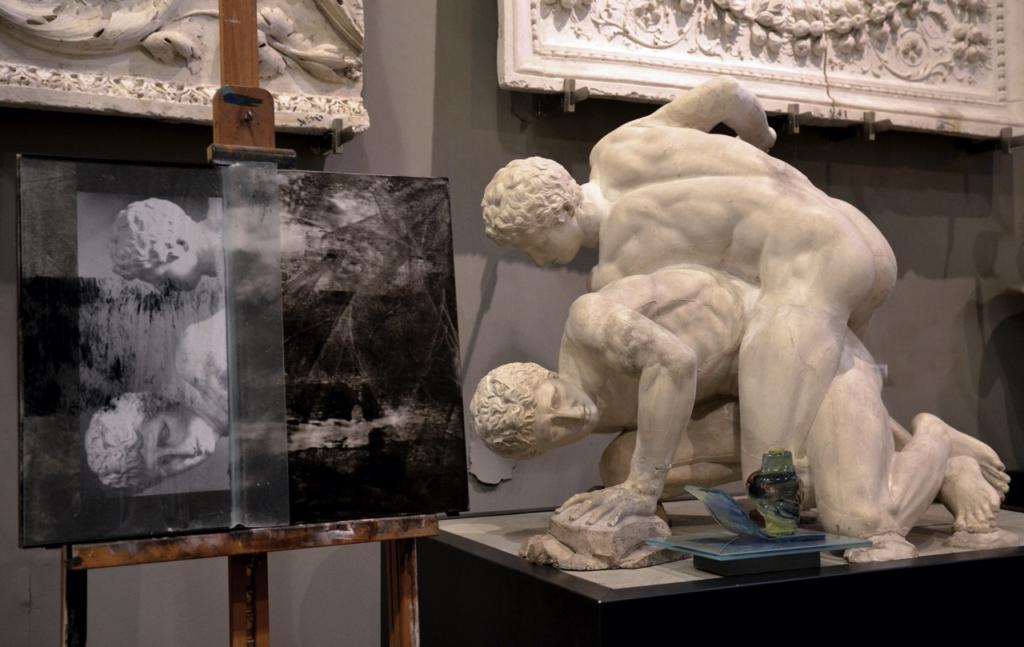 We meet the Maestro Giuliano Giuman at his current exhibition “Classico Futuro” at the Museum of the Accademia di Belle Arti in Perugia P. Vannucci and in the Aula dell’Ercole Farnese of the prestigious artistic institution until one month after the reopening of the museums for Covid.
A significant exhibition that represents the last ten years of the Umbrian artist’s work, taking a long creative path on the international scene for the unconventional and wise use of glass. The exhibition is a cycle of works that mix materials, concepts and poetic suggestions that have accompanied the artist throughout his career. Several works on glass that reveal themselves in various ways in relation to light.
An exhibition curated by Mara Predicatori Aldo Iori and Giovanni Manuali, talks about Giuman: “he directly enters photographic excerpts of the works (mostly plaster copies of originals) preserved in the Accademia museum that hosts him. The reference may also appear in a non-explicit way. It can be, as in many cases for the works installed directly among the Museum’s exhibits, a formal allusion, an echo or a reference to colours, shapes and concepts. But even more so, he seems to quote himself when, in a single work, he goes to condense the artistic practices he himself had extensively experimented with in previous decades. This is the case with the works created for the Aula dell’Ercole Farnese of the Academy. One of them all: Da Bertel Thorvaldsen is a work composed of three different surfaces, one superimposed on the other”. 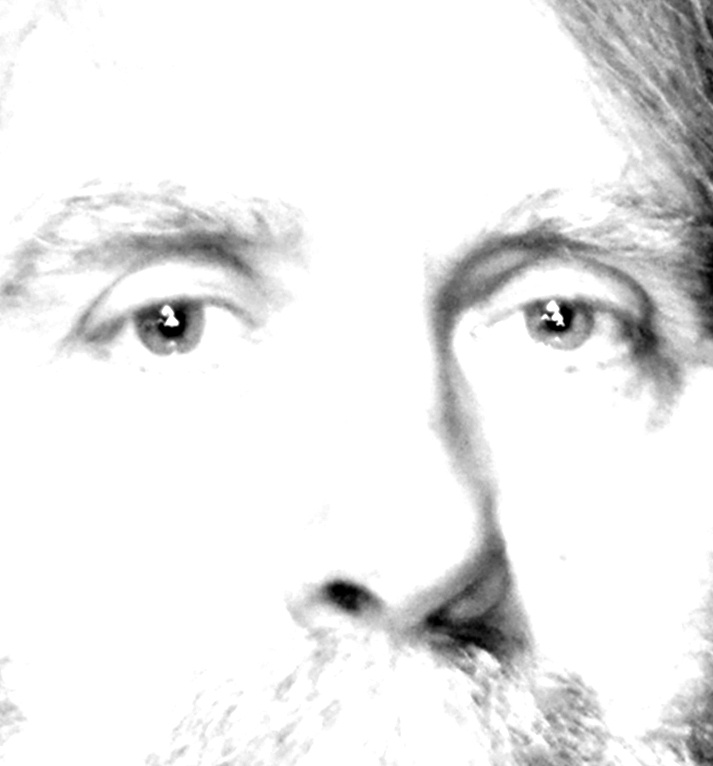 Maestro tell us first about her and then about this last exhibition:

1-How does your entire artistic journey begin? Let’s take a dive into the past to tell us about her
By chance. I took part for fun in 1964, in an impromptu painting exhibition where I won the 3rd prize.

3-What were the initial difficulties?
All the possible ones 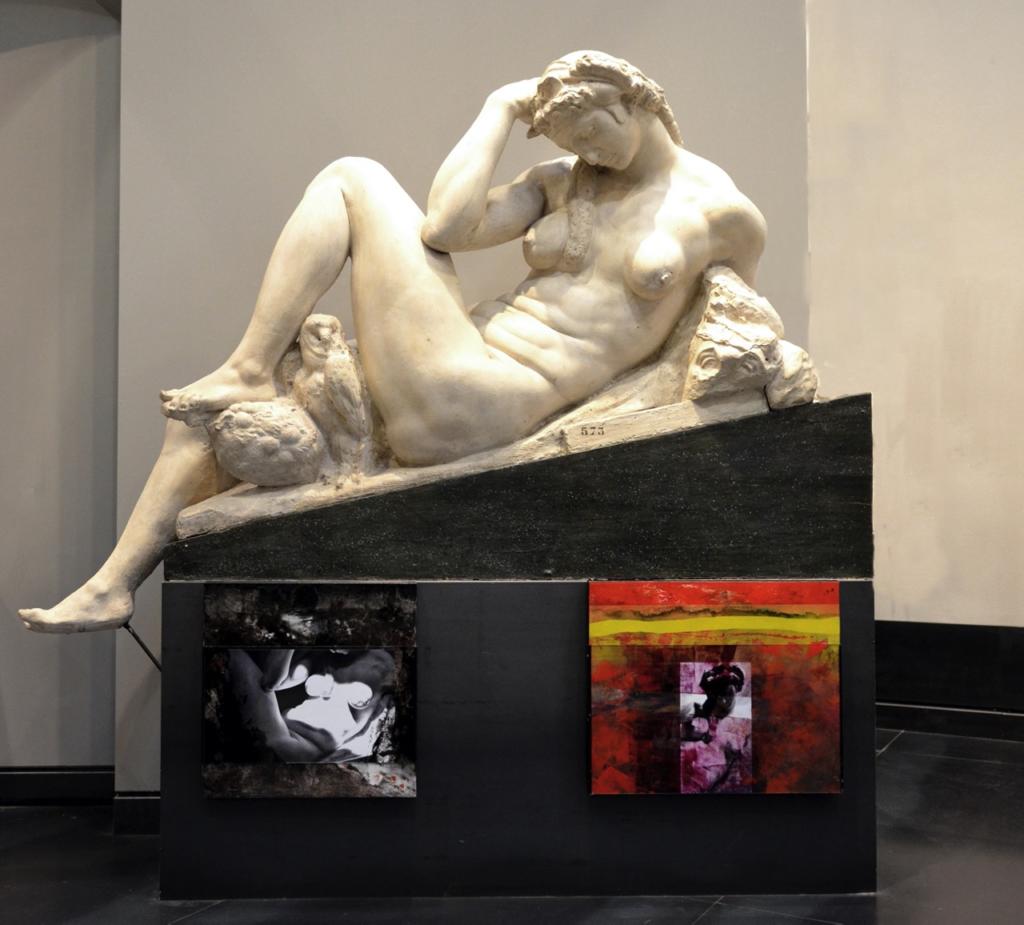 4- Where have you developed your artistic sense the most, which technique do you love the most?
I spent almost three years of my training with Gerardo Dottori. If by technique one thinks of new research, undoubtedly painting and casting on glass.

5 -Could you tell us a typical day as an artist, how do you work in detail?
It is impossible. There is no such thing as a typical day. I work many hours every day but never at the same time. Even the seasons have an influence on productivity. Of course you are more stimulated if there are exhibitions to prepare or commissions.

6- The Survey of the work on these layers of matter, when does it happen and why?
Painting on glass, oil on canvas, photography and overlapping light. By now it always happens. It is part of the artist’s research. 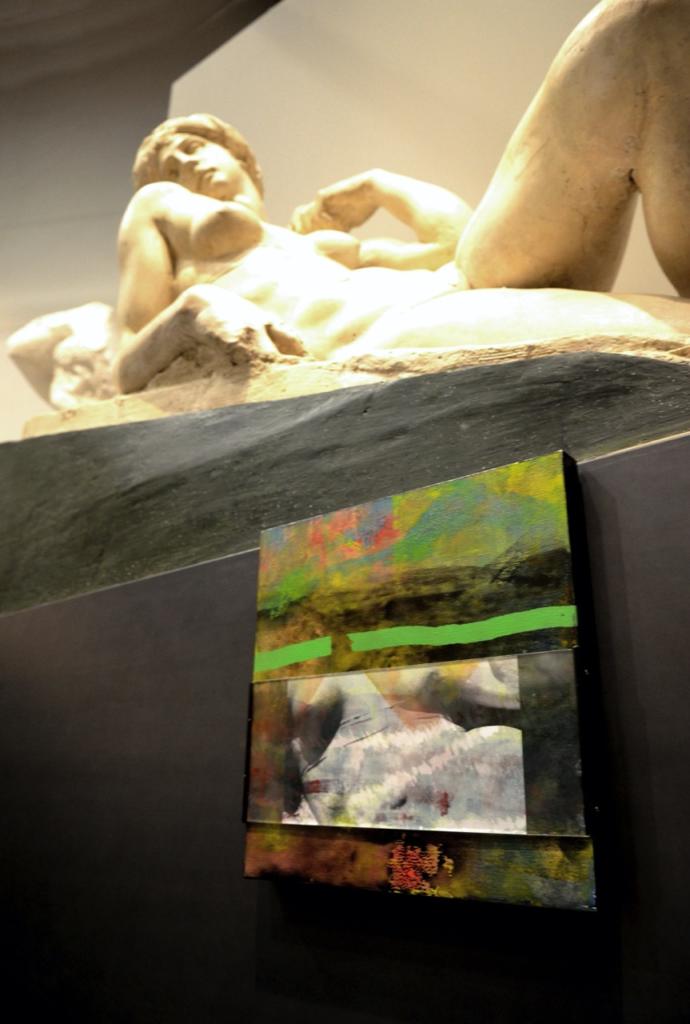 7- What artist has been his mentor?
Already said: Gerardo Dottori. He gave me a lithograph of his with this dedication: To his dear friend and brilliant colleague. I started crying but that was the moment I understood that I could be an artist.

8- How much does high technology influence the work of art today?
I have always been fascinated by technology. In my installations and performances I used image cross-fade projectors. When I think about it now I feel like I am watching a silent film. Today technology is often intrinsic to the work of art. 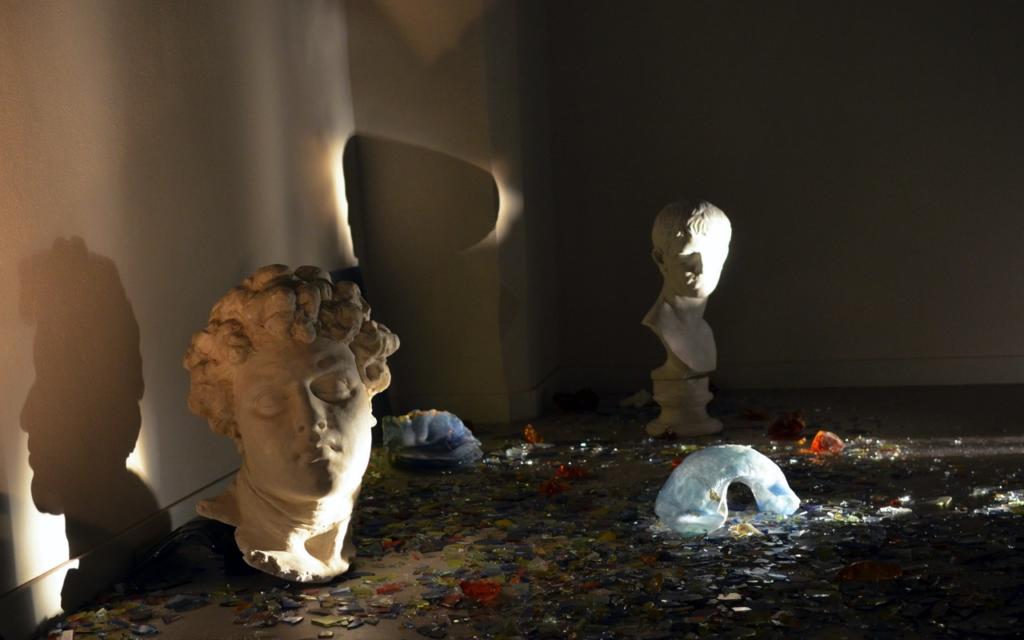 9- The material: How fundamental is glass in your works?
For more than thirty years he was the only child. Now the others have come back too, but he certainly still has privileges…

10 – How does space influence the work in the museum of the Accademia di Belle Arti di Perugia P. Vannucci?
I come from music and therefore space was fundamental for me even before I painted. Many of my exhibitions have been influenced by the exhibition space, not to mention the installations. Just try to think of the difference of a concert in a closed or open-air venue. 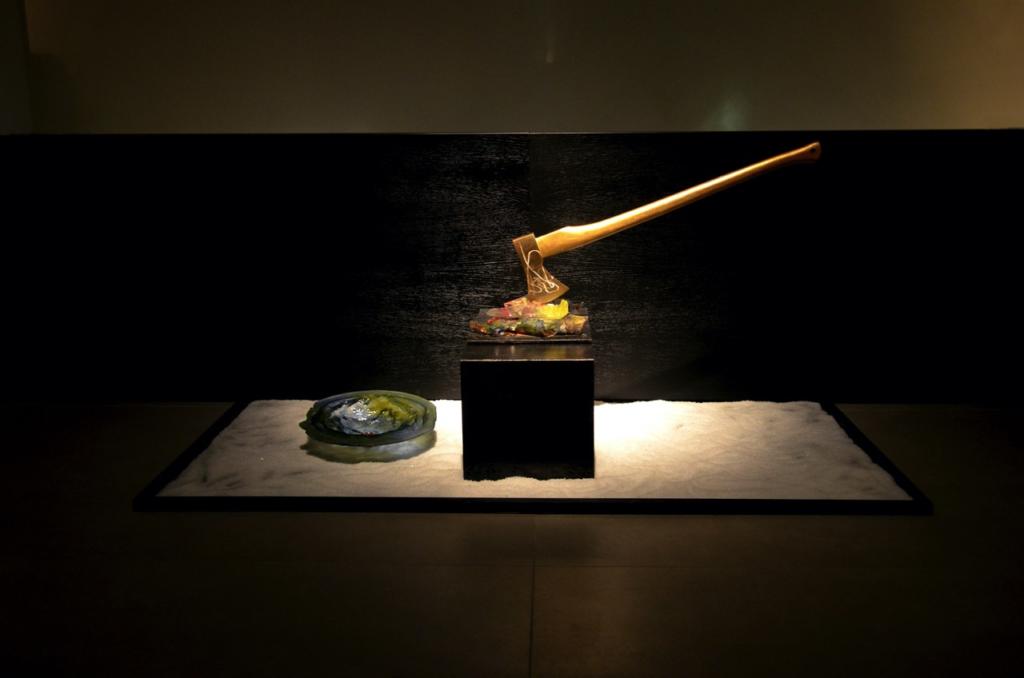 11- Future projects?
Classico Futuro was to open in March 2020, then moved to April and finally to October. There were two exhibitions scheduled in the autumn that were postponed. I hope to realize them in 2021 even if I think there will be some problems

12 – how is Art experiencing the great changes of today?
I don’t know how to answer that. For example, it is still too early to understand how the market will react or how people’s interest will change. 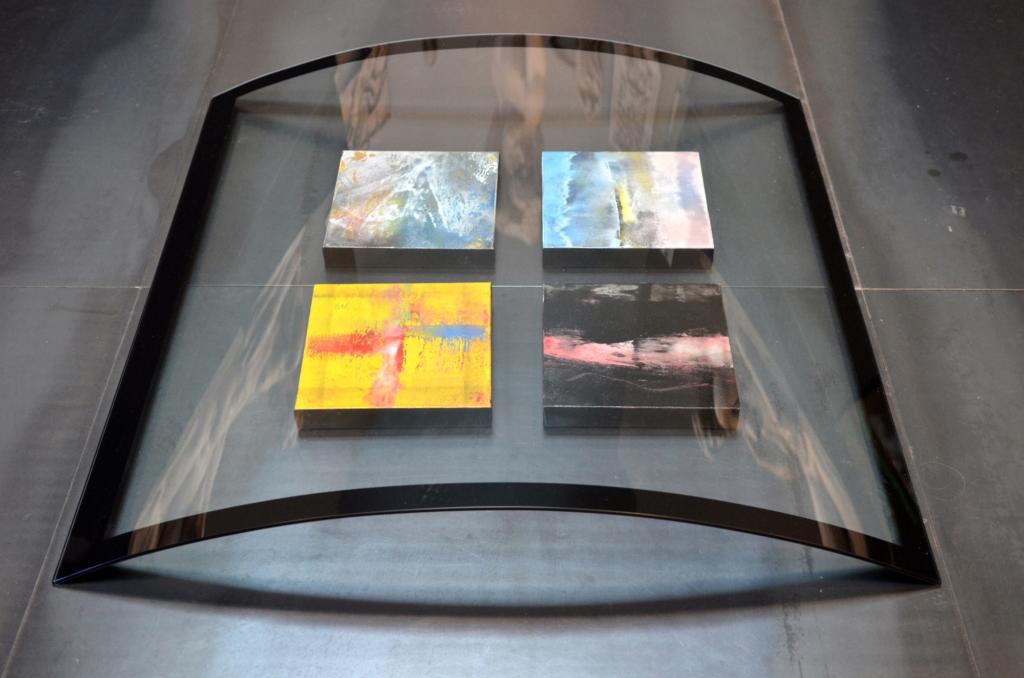 13- A dream you would like to realize?
An exhaustive monograph.

14- What is behind the Corner?
The surprise and the lie. Five years ago, I did a big exhibition called LAST TIME, really believing it was the last one. Never, ever would I have thought that, after only a year, I would start again with incredible vitality and energy, summing up and synthesizing all the materials touched and studied in my long journey. 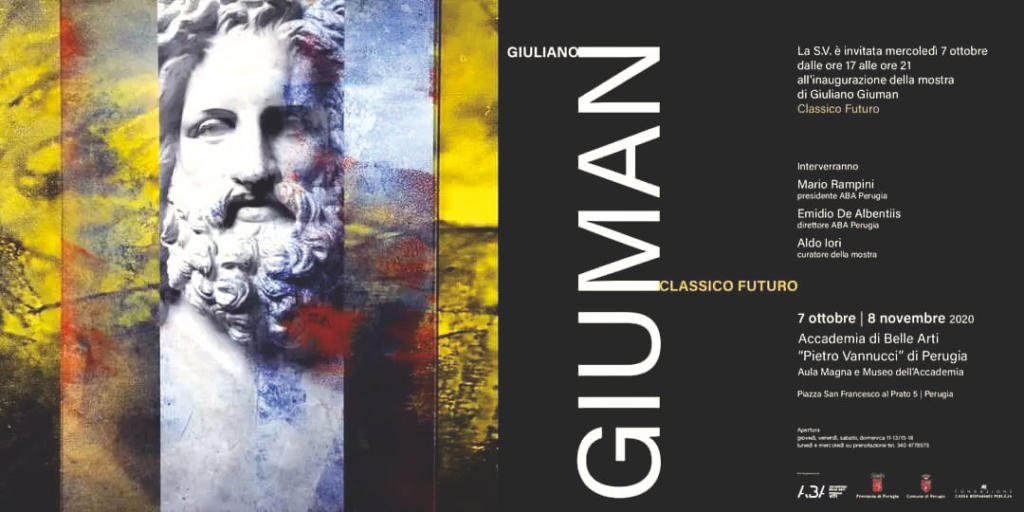 The exhibition/ itineraries: Giuman made his debut in his early twenties with oil paintings on canvas (1964/1988 – after 2016); he then began investigating and using photography (1974/1987 – after 2018); he later specialised in painting on glass with great fire (from 1986 to the present day) which became his chosen subject; there was then the practice and use of video (from 1975 to the present day) and the use of light as a sculptor of backlit works of art and glass (from 1977 to the present day). In short, a journey through the most diverse means of expression and the various technologies used, however, consistently used to create, in my view, works strongly characterized by a halo effect, or as I like to say, by a “reverb” effect.

The works of the above mentioned exhibition Classico Futuro, all recently realized, use the citation in a huge way. Giuman in them, in fact, sometimes directly enters photographic excerpts of the works (mostly plaster copies of originals) preserved at the Accademia museum that hosts it. The reference may also appear in a non-explicit way. It can be, as in many cases for the works installed directly among the Museum’s exhibits, a formal allusion, an echo or a reference to colours, shapes and concepts. Works created for the Aula dell’Ercole Farnese of the Academy. One of them all: Da Bertel Thorvaldsen is a work composed of three different surfaces, one superimposed on the other. From copy Raphael 2020. Glass painting with great fire, oil on canvas, photography, 79×50 cm (daylight) Da copia Raffaello (3), 2020. Glass painting, oil on canvas, photography, 79×50 cm (night light). A first layer of oil on canvas gives the surface the classic texture and body of the textile material; a second photographic layer, instead, presents a detail of the copy of Thorvaldsen’s artistic work; finally, a third layer of painting on granite glass (a complex technique that involves fixing the colour at very high temperatures to the incandescent magma of the sand), gives the surface the characteristic brilliance and luminescence that distinguishes Giuman’s works. Although the three layers form a whole, they reveal themselves in different ways in relation to the light. During the day, the compact nucleus of the work appears as a surface that is complex and rich in planes (which can also be seen from the almost sculptural edge of the painting), but it appears as a vaguely informal abstract device of colours and shapes. At night, or in any case when the light is switched off and the surfaces are backlit with a timer device, the works let the photography and the testimony of the museum’s work emerge as a priority, suffocating the colours of the canvases in shadows and opacity.

Giuliano Giuman -artist: born in Perugia in 1944. Twenty years old he began to paint following the teachings of Gerardo Dottori, his first teacher. He won many important national competitions for Italian State buildings. From 1998 to 2013 he was a lecturer in ‘Glass technique’ at the Brera Academy of Fine Arts. From 2009 to 2012 he was director of the “Pietro Vannucci” Academy of Fine Arts in Perugia, where he promoted the reopening of the museum and set up the School of Design. He has held over 100 solo and 200 group exhibitions in museums, galleries and public spaces in Italy and abroad.

The Academy Museum of Perugia: The heritage of the “Pietro Vannucci” Academy of Fine Arts Foundation includes about 600 plaster casts, 430 paintings, 12,000 drawings and 6,300 engravings. Mostly copies of originals, these materials served as study models for artists who went to learn art at the Academy. In 2012 the centuries-old existence of the Academy of Fine Arts in Perugia was given new life thanks to the re-arrangement of the works and the reopening to the public under the direction of Giuliano Giuman. Among the chalks, exceptional for their workmanship and variety, there are the gigantic Ercole Farnese, Il pugilatore Damòsseno, Amore e Psiche and Le Tre Grazie by Antonio Canova, an original copy donated by the artist, Il Laocoonte, Il Pastorello by Bertel Thorvaldsen. Among the paintings stand out Self-portrait with parrot by Mariano Guardabassi and paintings by Annibale Brugnoli, Domenico Bruschi, Armando Spadini, Mario Mafai, Alberto Burri, Gerardo Dottori.

Classic Future by Giuliano Giuman at the Museum of the Academy of Fine Arts in Perugia P. Vannucci in Perugia (hoping for the reopening of the exhibition spaces soon)

The exhibition: the exhibition itinerary, curated by Aldo Iori and Giovanni Manuali, opens in the new Ercole Farnese Hall and continues in the rooms of the Academy Museum.
The exhibition will reopen for about a month after the Covid19 emergency. 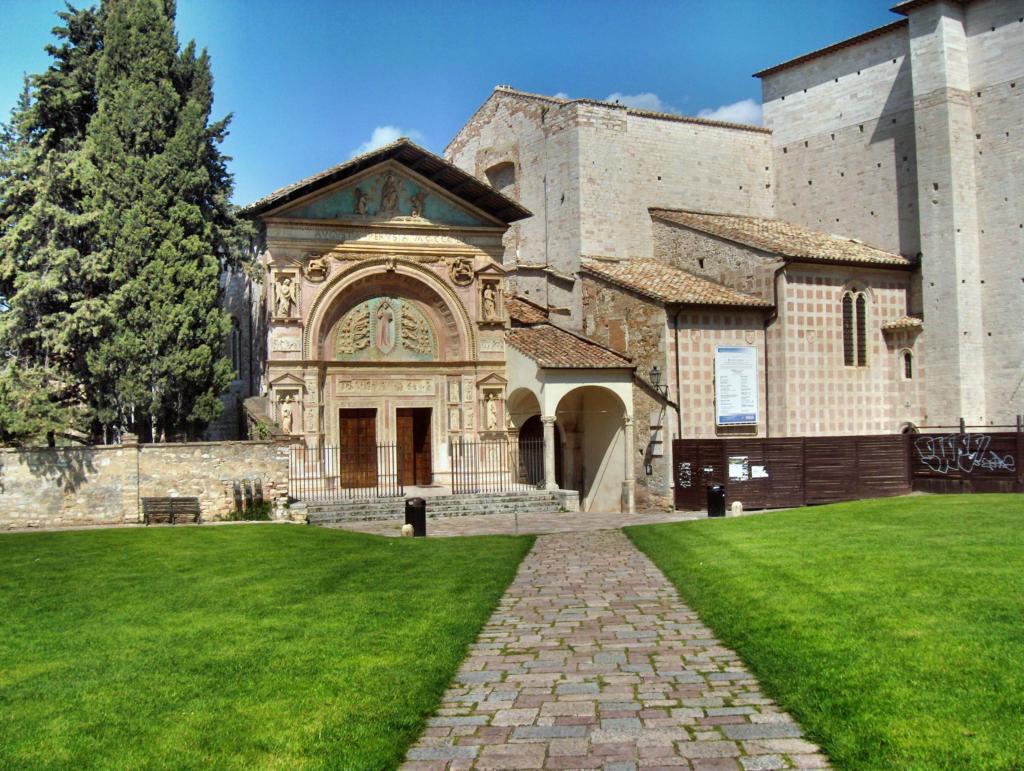