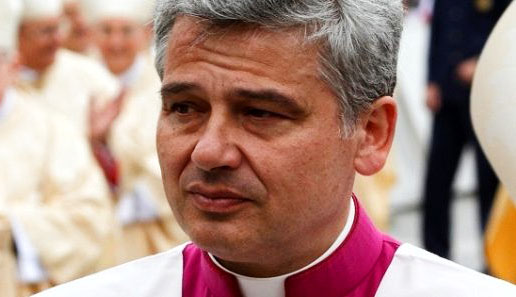 “Father Konrad was my confessor from 2007 to 2014, since I had the meeting with Jesus in my life, on the set of the film I wrote and directed, entitled” Petali di Rosa “, starring Claudia Koll and Antonella Ponziani, film about the life of Sister Rosa Roccuzzo, founder of the Ursuline Sisters of the Holy Family, the congregation from which the religious vocation of Sister Cristina, of which I was tutor and Art Director, came to life.In 2007, after the sudden conversion, on the advice of Claudia Koll, I consecrated myself as a layman to Merciful Jesus in the Church of Santo Spirito in Sassia in Rome, on Saint Faustina’s day … October 5th! That same day the Lord made me meet Father Konrad, from whom I went every holy day of my life, for 8 years, at 3 pm, for the hour of Divine Mercy, to confess and to show me the right path to go, for my journey of conversion…

Who has known Father Konrad like me, knows very well from what every action is animated, every thought, every word, uniquely “to the love for the neighbor and for Jesus!”, From here comes the spontaneous motivation that prompted him to make the gesture of reactivating the building counter in Via Santa Croce in Jerusalem in Rome!Jesus with his example taught us that in the face of human suffering we must act with the heart and not with reason! All Saints in history have followed the example of Jesus, from St. Francis of Assisi to Padre Pio to Mother Teresa of Calcutta … and the same has been done by Father Konrad, restoring the electricity to the stable inhabited from 450 human beings, including 98 children, some of whom are in serious health conditions!In the stable one they live not only from outside the EU, as they want us to believe, but many Italian families live, fallen into disgrace due to the economic crisis that the country is going through.

Father Konrad, since he was appointed Almsmith and then made Cardinal by Pope Francis, has helped thousands of people in difficulty, has paid electricity bills to hundreds of Italian families, looked after homeless people and poor people for the outskirts of Rome, every night , on some occasions he also accompanied Pope Francis in disguise, through the streets of the eternal city, at night, to assist the last, the homeless, the refugees, the invisible beings that nobody by day wants to see or hear!Who has had the gift of having Father Konrad as confessor and Spiritual Father, as I had … he knows very well that he is a Saint of our day!I cannot explain the gentleness, the mercy and the peace that Father Konrad succeeds in transmitting, I brought from him many “lost sheep” that after leaving his confessional were other people! I saw them crying in fits and starts, I saw them lose consciousness and almost fainted with emotion, I saw them scream with joy, I saw them free from the burden of sin, guilt, anger, and some of the people I have conducted by Father Konrad, today they are on a path of conversion!All these things happen for the Holiness of Father Konrad, it is right that people know the truth, because the press and some politicians have called the Cardinal “a coward” or even abroad, where I live, the news I live they have called a “Robin Hood of our times” … not so, because Robin Hood was a thief, who stole from the rich to give to the poor … Father Konrad is not a thief and he does not steal from anyone !The moment he made that gesture he took all the responsibility personally and as he always did, he will pay the debt of the building’s bills!Meanwhile he has not acted irresponsibly, as he first tried to dialogue with the electricity company and with local institutions, when he saw that he did not receive any concrete response in a short time, he decided to intervene in first person by hanging up the meter! So he acted in complete good faith, and I’m sure, knowing him, that he didn’t regret the gesture he made, but he would do it again, if necessary, another 100 or 1000 times! For him it only counts people’s lives, money has no value …I still remember with affection the day when I gave him a copy of my book, on my conversion, entitled “Suddenly the light”, I gave him a copy and gave him a copy to give him to Pope Benedict XVI, with a my personal letter, at that time he was the Pope’s master of ceremonies, it was a few months before the Pope abdicated and decided to abandon the throne Petrino … Father Konrad with his usual calmness and with that his deep and reassuring tone of voice he told me that that very day he would hand over my book and the letter to the Holy Father!

In that letter, which I always kept in secret, I told the Pope that sometimes it was necessary to make very painful choices for the good of others and of the Church … two months later his resignation arrived!Today I still don’t know if those words of mine have somehow affected the unexpected decision of Pope Benedict XVI, but they have certainly been dictated to me by the Holy Spirit and they were undoubtedly prophetic words, which are not the fruit of my human misery!After the affair, I was really very heartbroken, I felt a huge emptiness in my heart as a believer, and I went to Father Konrad to have moral and spiritual advice for what was happening, and he always knew on that occasion as well , very painful for the Church, knowing how to comfort me …In any bad or beautiful situation, Father Konrad always manages to make sense of things, and this charisma he possesses derives from his Holiness! “