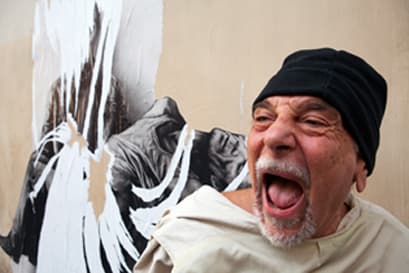 At the end of RAW the Contemporary Art Week in Rome, Artist Carlo Maria Causati presents to the Italian Customs the work titled “SET PASOLINI” where she exhibits 13 great photos, chosen from the 100 portraits made in performance style , at Piazza Mattei.

The artist explains his concept: “Ernest Pignon with his work has given the city the ultimate frame of existence for the artist, poet, writer, director, actor, playwright, essayist: Pier Paolo Pasolini, frozen along his last walk. In this journey the poet questions and calls the passionate attentive, invites him, causes him to relate to him. It does not go unnoticed. 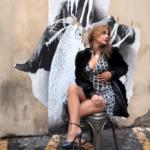 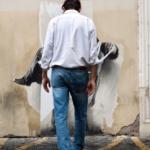 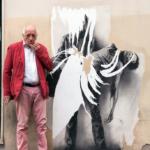 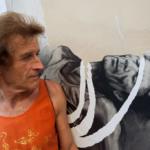 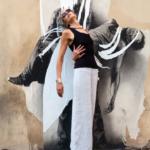 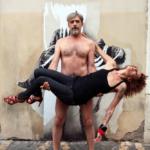 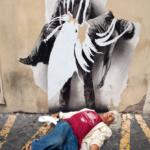 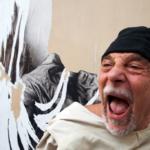 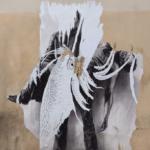 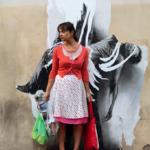 ”The reaction to being there is often violent. It causes tears and, equally, it is torn, ripped. Some people would like to get rid of it. But in the grip of these lacerations are welcomed those who relate to him, converse. It is at that moment that another subject, discreet but always avid to humanity, stops to look and wait for the future of these initially casual encounters. From this vision comes the idea of ​​causing others in which the invited and challenged subjects become an active part of an improvised performance that transforms for a moment a corner of the city on a living stage. Art must also move from the inside. 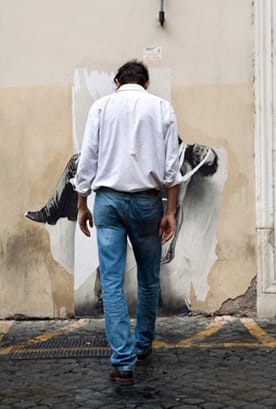 Beyond the 13 gigantographs in pvc (133×200), will be exhibited the reproduction of the potted poster of the Pasolini Pietà used by Causati, in order to open an active participation port to the visitors of the exhibition, stimulating them to do what the artist did , making them even more involved in the event. A profound artist who in some respects reflects on the evils of society and the anxieties of his future development and leads us to Think..

We meet Carlo Maria in his studio for an little interview…

1) Carlo Maria, I know you some years ago and I want that the big public know you, talking about you. How it all started?

Everything started after a long trip to the US in the late 1970s, which took me from New York to San Francisco and later to Mexico City during which I had the opportunity to make very interesting meetings in the photographic field and beyond.

I started experimenting with paths that will then come back and guide my creativity. 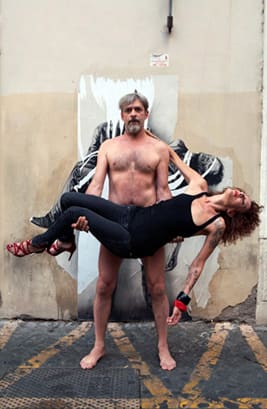 2) How do you develop a project? What inspiration do you draw?

The sources of inspiration are many and often different. If we look at my work up to now realized, exposed and not, we realize that besides the themes to be different are also the elements that I photograph not to be totally similar. I do not care about the subject as such, I do not guide her aesthetic beauty, although I recognize the importance, what I choose as a representative icon of my own image must be the one that possesses the ability to convey my own thought conceptual.

3) An active participation in this design project what did Pasolini bring you?

When I saw the work of Ernest Pignon Ernest appear magically at various places in Rome it was very exciting; I started to turn the city into a kind of treasure hunter. I already knew Ernest’s works, how to do it, and how it offers them to cities and citizens: on tiptoe, often at night. In the morning they are seemingly silent but burdened with an uncontrollable force.

Ernest lived in Naples for a long time, and he has given fantastic works, which still exist after years, because they are strong and engaging. And the Neapolitans have protected them, safeguarding them.

With Pasolini’s Piety things have gone quite differently, in a short time they were torn, destroyed, all.

Pasolini was an uncomfortable man to many … was canceled. And so it was.

But a small spell has safeguarded the work that was at Piazza Mattei in Rome: it was violated but the tears that were actually made turned this image into an even more powerful icon.

It was in looking at how it was being watched, lived this image that I started to fit in her mind and grasp the reactions of the passers-by.

The next step was to make photographic performances with subjects invited by me to get in touch with Pasolini in a totally free way and without any indication of me.

The filming lasted about a year and the work was presented to the Mondrian Suite on the closing days of the 40th anniversary of the Poet’s death. 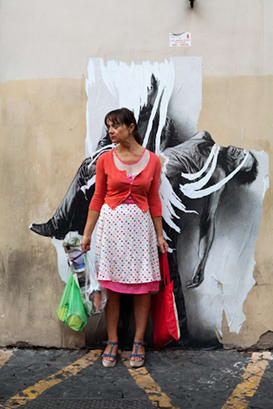 4) What space and work do you report and how do you express yourself in this context?

My original idea, which is always ready to be realized, was to print portraits on poster paper and attack them around the city like the Pignon effect. Unfortunately the tests were not chromatic, so I tried the pvc and the results were amazing. At this point however the pvc created another problem: I could not paste them as I would have done with the paper posters on the walls of the city. So I went looking for a space that could be set up with photos to remind the city, in the specific square of Mattei. If you click on this link http://www.studioargento.com/arte/causati/tour.html you will see how the show was set up: you will appear to be on the road.

5) Do your jobs reflect our society in full?

Of course they also reflect the moods, the thoughts, the dreams, the labyrinths of the soul.

6) This “Pasolini Set” project what leaves you insiede? And what would you like to leave on your pubblic?

It confirms that every image you can live in is always different, in a way that is closely tied to your mood in the moment that intercepts it. The freedom to be yourself and the ability to be able to do it.

7) What is your favorite artist?

8) Three adjectives that define you?

9) What would you like to keep and change in the art world and why?

10) Future projects and what do you want to accomplish?

There are a number of projects, already ready in the drawer. Most of my works are installations that relate to the public. Humanity is the guiding principle of what I do and in order to be able to fully transmit my messages I need adequate spaces.

Carlo Maria Causati: Artist photographer, exhibited in Italy, England, France, Russia, Spain, Holland, Australia. He has won several prizes as in 1994 – Special Award AMI (Association for Multimedia International – Florida – USA), Rieti, for multivision “Walking in Cosimo Park”; 1986 – 1st Prize of the Photographic Competition “Foreigners in Rome” – Roman Photographic Association. His works are included in the permanent collections of the National Library of Paris, the National Gallery of Modern Art in Rome, the National Library of Lincei and Corsiniana in Rome, MAAM and various private collections. At the GNAM Library, the Biobibliographic Board is open. The Ministry of Cultural Heritage and Activities – ICCD 2005 – chose “Words” as reference work in “OAC Card – Opera Contemporanea”. It is present on the site of Contemporary Art Italian www.contemporaneamente.it

From 14 to 29 October 2017: exhibition Set Pasolini by Carlo Maria Causati