Singer-songwriter, dancer and model. Talent, character and exhibitionism. This is the synthesis of Juel, Chiara Panzieri, born and raised in Rome. A child prodigy, she immediately showed her artistic predisposition with dance, making her the reason for her life and work over the years. A multifaceted artist, she participates as a dancer in theatrical performances in the “Compagnia delle Stelle” at the Sistina in Rome and at the musical “Grease”. He performs as a performer in the “Battiti Live” and “Great Lenghts” show in London, Gothenburg and Naples. Multiple his television experiences as a dancer including “Domenica In”, “Operation Triumph”, “Veline”, “Paperissima”, “Ciak Si Canta” and as an actress in the sit-com “Io e Margherita” with Enrico Beruschi and in the film “Five Hours South”.

He wants paper and pen to be complete and, thanks to an incident that forces her home for a year, writes rivers of rhymes that speak of her. It grows in the hip hop of the Capital, using any musical form useful to its message. Disinvolved on stage and style icon, immediately catch the public’s attention. Musically begins to get noticed in 2013 when it is involved by Primo Brown of Cor Veleno for the “Fatte ‘na Vita” published in the third volume of “Rap In Hands”. “Cenere e Polvere” is the latest single published by the Roman artist for the Limited Music Trade label.

What’s Rome in your music and your lyrics?
Hello! Thank you for taking my time and space; I greet all readers of Rome Central. Rome is present in every song and in everything I do because it is part of me. I was born and raised in this beautiful and chaotic city, I got the habits, the dialect and part of my artistic and human spirit.

How do you see the music scene in Rome?
There are not many opportunities for singer-songwriters who want to play … you have to be good PR to get the managers’ attention and this is another example of how the numbers of originality and art are more important for new music. In Rome there are a lot of cover bands that take advantage of the numbers of famous artists who move for a beer and a pizza. Cost zero, insured gain for the room. I did not want to be controversy but this is my thought! 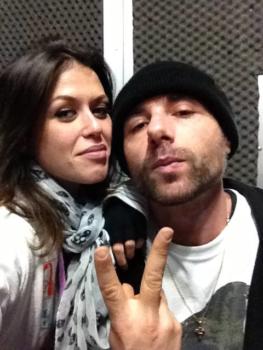 How was your relationship with Primo Brown of Cor Veleno?

We were friends. A relationship of respect, respect, loyalty and understanding. We were confronted with our different ways of seeing things, which were not so different. We wanted to “conquer the world” so we said when we were at the mercy of our creative phase. He taught me to accept my artistic nuances and make it a winning weapon. We were friends despite even long silences, playmates and raids and two songwriters hungry for music and passion. He was and is my guiding spirit!

How do you see the music scene in Rome?
There are not many opportunities for singer-songwriters who want to play … you have to be good PR to get the managers’ attention and this is another example of how the numbers of originality and art are more important for new music. In Rome there are a lot of cover bands that take advantage of the numbers of famous artists who move for a beer and a pizza. Cost zero, insured gain for the room. I did not want to be controversy but this is my thought!

Playing in the Capital helps respect those who live in other areas?
No, Capital is a little firm in this respect. There are not many opportunities to perform.

What venues frequent in Rome?
Until a few years ago I was an employee of the Roman nightlife. I also organized live evenings R’n’B in which, moreover, I met Cor Veleno. Having frequented the Romans a lot, now I do not like spending nights at the disco. I like to feed my creativity by listening and seeing things and situations out of my old habits to get new inputs and stimuli.

You are a 360 ° artist, but, between songwriter, dancer and model, what better represents you?
Surely the way I express myself with music is more direct and sincere than wearing a dress. The voice, the words come straight to the heart and there is no escape from feeling “naked” and also show their fragility.

In addition to the recent singles you published, are you working on a complete album?
Yes, other songs are already ready and most likely before the end of 2018 the album will be released.

Does it still make sense for an emerging artist to publish an album in 2018?
If you already have a few singles and a good result behind, I would say yes, even though maybe an EP would be more appropriate.

Featuring in the drawer?
For now nothing concrete but if I could definitely choose Jovanotti or Tiziano Ferro would be right for me.

Talent, Instagram, YouTube, streaming are a resource for music or a limit?
For Talents I would not talk about music but about shows, music is exploited for this purpose and projects that are born die after a year. Instagram and Youtube help the artist to reach the public using other forms of communication, promoting their music freely.

Upcoming events on Juel’s agenda?
I’m involved in the radio promotion of the last single “Cenere e Polvere”. I’m preparing a live-show with dancers in tow. To find out more you can follow me on my official website www.juelmusic.it from which you can reach my social networks and where you can find all the news. Good music.

One comment to “Juel, the Roman artist between rap and rock: «Primo Brown is my spirit guide »”