The Ladyevers have featured on stage, “The Swing Dives” (“Le Dive dello Swing”), their first feature theater premiered in April 2017 on Brancaccino’s stage, directed by Massimiliano Vado. This time, however, they performed on a new stage, the Sala Umberto Theater. The Ladyevers have staged a brilliant show of sharp irony and all to the feminine, telling their rise to success and what it does, in swing time. With a repertoire that dates back to the 1950s as the “Tulipan” of Trio Lescano and “Tu vuò fa’ l’americano” sung with the extraordinary participation of Stefano Fresi (a great musician and actor) to the 80’s and 90’s songs artists such as Max Pezzali and Laura Pausini, but all reinterpreted in a swing key, to their unpublished pieces. Accompanied constantly by the piano of Roberto Gori who has been dealing with music and musical direction. Artistic supervision is instead of Lillo Petrolo.

The Three Dives, or Divette, are a trio of actresses / singers (Sugar, Teresa Federico, Pepper, Valentina Ruggeri e Honey, Francesca Nerozzi) that was formed in 2012, now known internationally, after a New York tour and having performed alongside artists like Chiara Civello, Renzo Arbore, Claudio “Greg” Gregori and Anastacia. They also debuted on TV at “Settenote” by Gigi Marzullo airing on RAI 1 as usual guests and fiction RAI 1 “Il Paradiso delle Signore” for which they also wrote and interpreted the soundtrack that won the Sonor Award 2015.

The three dives, in the midst of their crackling career, could not come to the creation of this entertaining pop show.

WHERE
The show was seen at Theatre Sala Umberto, in Via della Mercede, 50 Rome, 15 November 2017

The Sala Umberto of Rome adheres to the “busy place” campaign # 30dayNo against all gender violence. Until November 25, 2017 – World Day Against Violence Against Women – every night will leave a symbolic place for a woman who wanted to be present at the Theater, to smile, to reflect, perhaps to move, but who can not as a victim of violence. 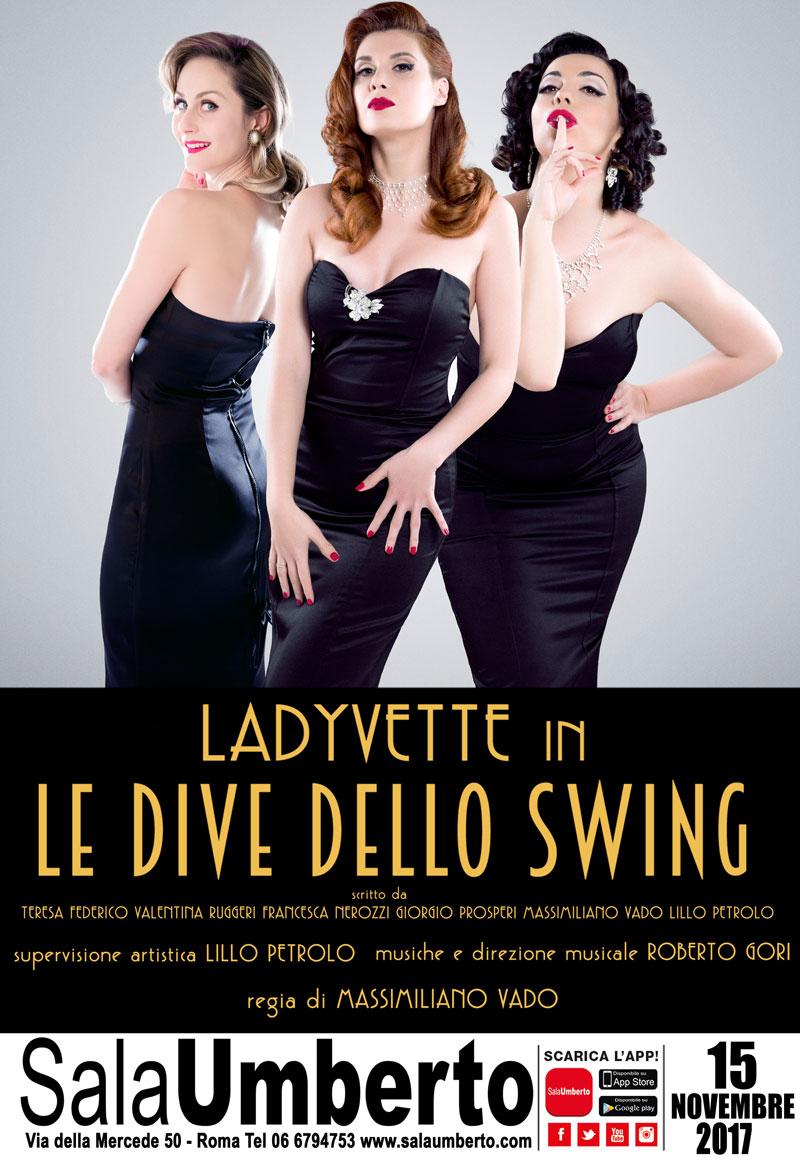 THE DIVE OF THE SWING

Mixing the charm of the dives of the past and a whirling irony to the feminine, Ladyvette creates a new variety made of unreleased pieces in vintage style, classics of 80’s and 90’s pop music reinterpreted in a swing-key with theatrical intermeshes.

By the time of the 1950’s, a strong creative rebirth in opposition to the war, three actresses / singers, in this period so shaky, decided to laugh in the chiselling of what they always wanted to be: Sugar Teresa Federico, Pepper Valentina Ruggeri and Honey Francesca Nerozzi, the Three Dives, indeed Divette. In four years of activity, Ladyvette has been guests of: Summer Jamboree, Dolce Vita Festival in Croatia, Vintage Rome, Jazz House, Micca and Cotton Clubs, Kino, Cinema Library and Fabrique du Cinema. For the tv broadcast on RAI “Community, the other Italy”, and in the season 2014-2015 fixed guests of the “Seven Notes” broadcast by G. Marzullo aired on RAI 1.
They also lent their faces to the Algida TV spot and in the “Radio Cortile” film directed by Francesco Bonelli. In October 2014 they played in London’s prestigious Ronnie Scott’s jazz club and collaborated constantly with British fashion designer Vivien of Holloway, specializing in 50s. They dueted with artists such as Chiara Civello, Renzo Arbore and Claudio Greg Gregori. In October 2015 they played at the best New York Clubs (including Birdland and Joe’s Pub). They played, alongside Anastacia, at the Children’s Peace charity gig. In 2016 I’m in the cast of fiction “The Paradise of the Ladies” RAI1 and have just finished spinning the second series that will air in the fall of 2017, which sees both actresses and autographs and performers of the soundtrack that won the Column Award Sonore 2015. In 2017 they debuted with their first “Le Dive del Swing” theatrical performance directed by Massimilano Vado the musical direction of Roberto Gori and the artistic supervision of Lillo Petrolo in the exhibition “One Room All for Her” by Marioletta Bideri at the Brancaccino Theater in Rome