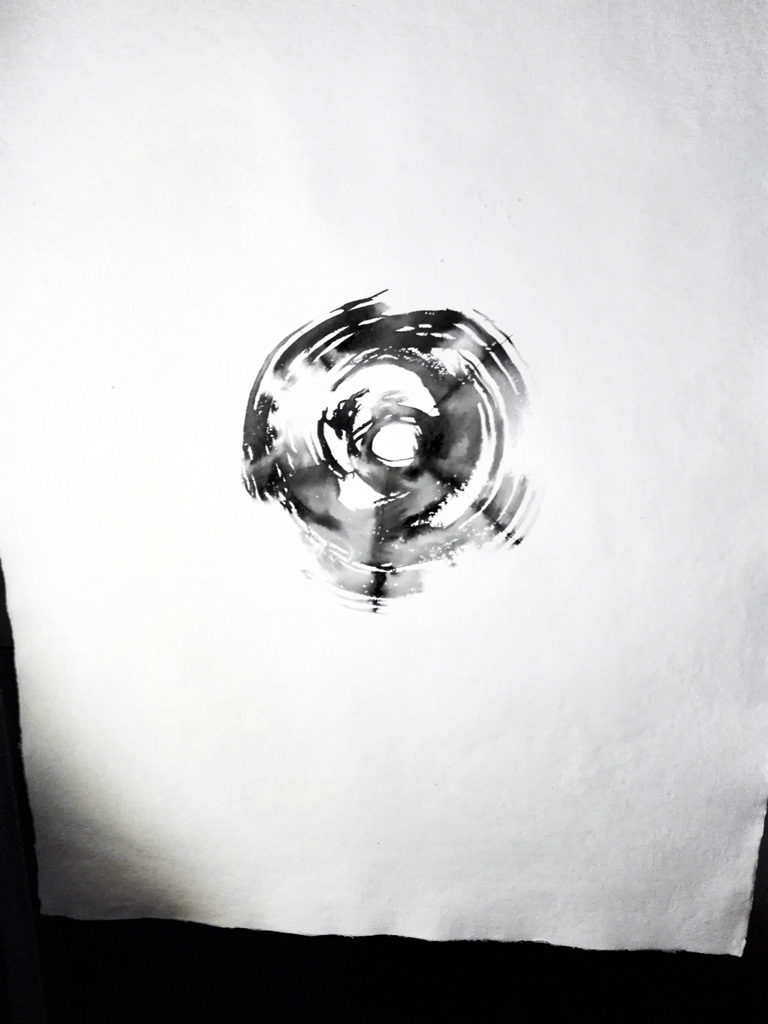 The art world thinks always, creates and is full, how our brain. This time, we can dive into the void … a full empty- the exhibition of Giorgio Pahor in Rome. “The perception of emptiness” the title of his exhibition which already makes itself heard, even before going to see her.

The theme of the “vacuum” has had over several very interesting studies of contemporary art, among other expressions different artists are testimony as Klein, Warhol, George Pollock, Fontana, … they all share a strong sense of the tangible and sensitive. For example, with Yves Klein’s pictorial research it is an ecstatic emotion and immediately communicable. The vacuum at the time also called “Nouveau Réalisme”: It is a void filled with a partial semantics, the completion of which is very suitably left to viewers. 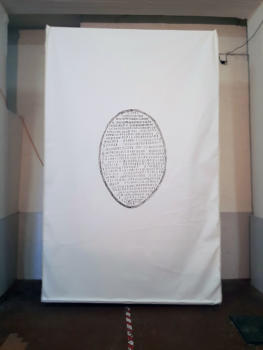 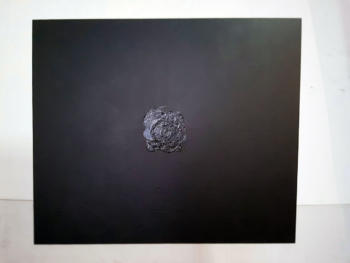 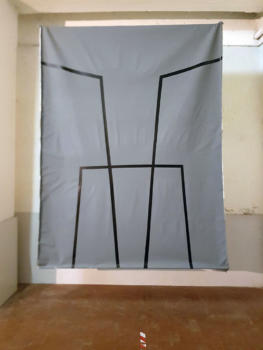 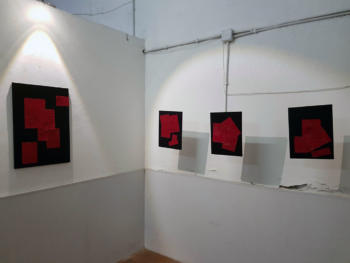 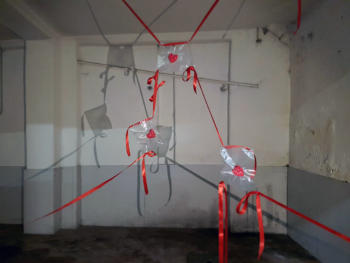 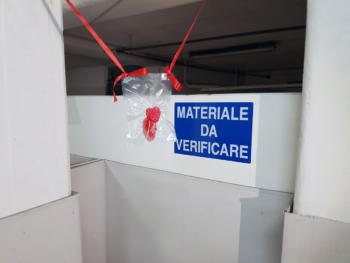 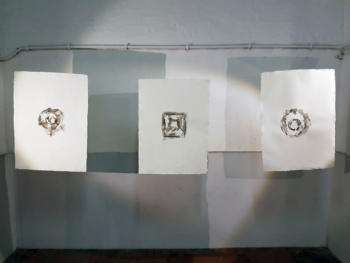 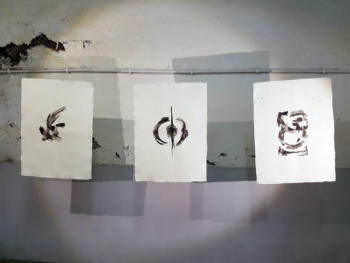 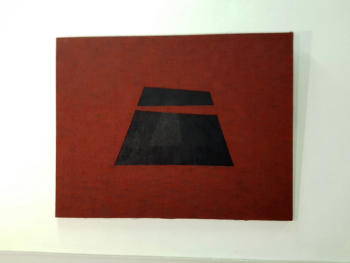 The vacuum, and then, I would say that it is not the total absence, or not be the negation. The void is filled, it is a road, is energy, is positive. It makes us think very empty … is perhaps also something that is not there, because there is no more, or that we would like there to be, or feel that there should be … That emptiness perhaps shows us a lack, because it trace of a non-presence and the absence tells us many things to discover …

In the artworks of Giorgio Pahor we found sensitivity space with some black and some deep reds. A road that leads you to reflect on the full hollow, the essence of life. The artwork reveal traits surprising, such as paintings by Pahor, that make us a few ideas, maybe the concept of presence-absence, empty-full … 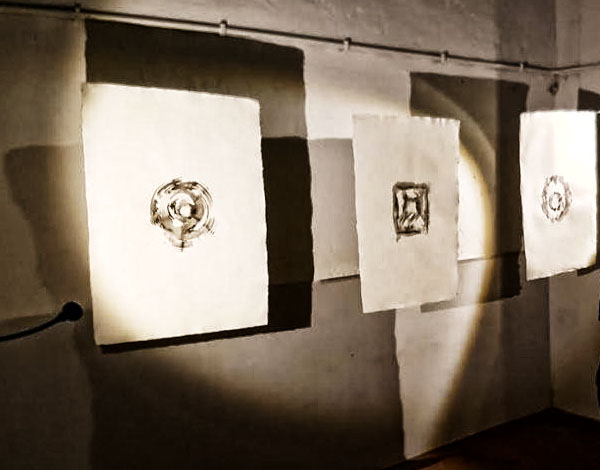 We mett Giorgio Pahor at the show in Rome within a space a bit délabré and fascinating, where his splendid artworks are .. 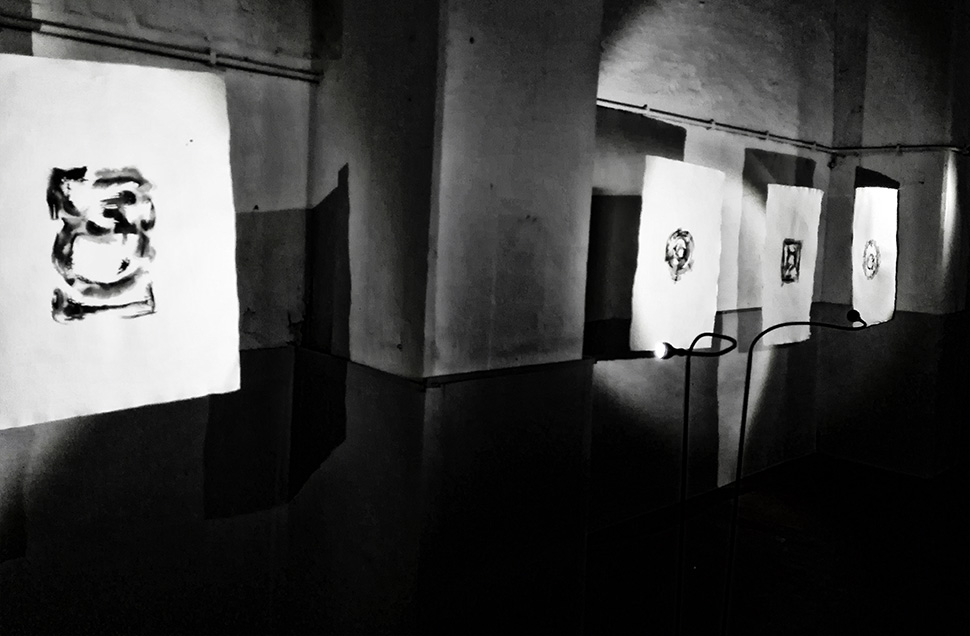 Since I was a child I’ve always had a notch for drawing and painting, and my father sent me for a couple of weeks to stay with a sculptor from Ascoli Piceno, Giuseppe Marinucci, who gave me the basis of drawing and the sense of proportions. I then followed my own path, developping an attention for watercolour and for indian ink, until in 1992 I was lucky enough to meet Eduardo Palumbo, a neapolitan painter who lives in Rome. He is my mentor and he introduced me to abstract art, and it took me almost four years to grab this concept and produce my first abstract paintings. At which point master Palumbo was kind enough to organize my first exhibition in the church “of the artists”, Santa Maria in Montesanto, in Rome in march 1996. That’s how it really started.

With colours which sometimes, as for “a perception of emptiness”, are monochrome.

I don’t really have a specific way to work. At times I decide to work on a concept or an idea, and during this phase thoughts become sketches, drawings, projects. When I feel that my mind and my spirit are full of informations, ideas and concepts, and the work on the project is done, the liberating creative work starts.

Other times I just feel the urge to be creative and I start working, the painting gets defined while the work is in progress, and when it is completed it often becomes a starting point for new projects. I don’t really have a specific way to proceed during a working day. Sometimes you have to prepare the material, sometimes you have the creative moments.

I think that a work of art is the product of man that is able to give you emotions and to express the inexpressible.

There is not a particular artist that inspires. I admire the refinement of Mantegna, the planning of Paolo Uccello, the light of Caravaggio and the Dutch painters, the strength of impressionism, the ecclectical work of Max Ernst, the ideas of Dada, the dynamic representation of movement by the Futurists, the creative freedom of the Nouveau Réalisme artists like Ives Klein. These are only a few thoughts I have in this moment but I don’t want to make any list because the influence on my work is given by every single art piece I have seen in all these years and most of all by the artists I have met and those whom I worked with. 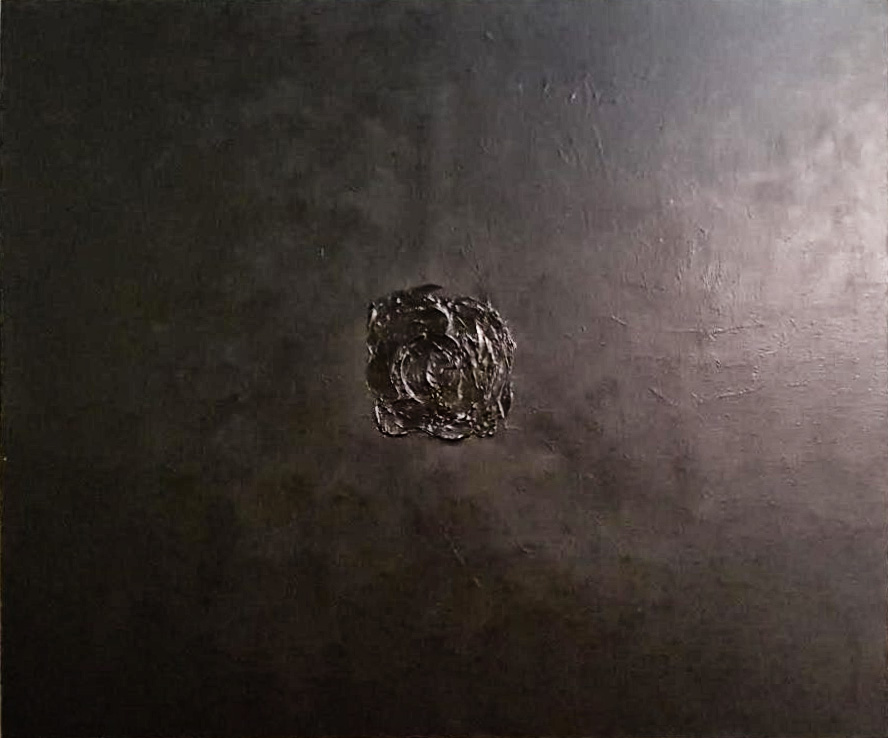 Emptiness is a theme that many artists have dwelt on. I tried to express the way we could perceive emptiness. When i started to think about emptiness i noticed that this concept make people restless. It is a cultural background that we have inherited from Aristoteles with his concept of “horror vacui”, nature that refuses emptiness, thus denying its existence.This idea got engraved in the cultural memory of our western society, and it leads us to unconsciously reject this concept, giving it essentially a negative status. It hasn’t always been that way. Since the beginning of time man finds in empty spaces a sense of sacred, as the vastness of the sea, the energy of a bare patch in a forest, the greatness of a circle of mountains. Man tends to recreate those spaces building big squares, churches, huge buildings, stadiums, all structures with big empty spaces ready to be filled. It is the intention of man to dominate emptiness, as it tries to dominate everything in nature. Democritus wrote that “empty is the quality of space that allows movement” and Lucretius wrote “it exists an intangible place, empty and emptiness”.

Leonardo da Vinci wrote that “of all the great concepts that dwell inside of us, the one of nothingness is certainly the most prolific”. At the time emptiness and nothingness were synonyms. Nowadays science and modern philosofy separate them. When I studied emptiness I asked myself if this was a concept that has a particular meaning in this particular moment of our society. I think it is a time of awareness of contemporary civilization and a rediscovery of its importance. This why I wanted to work on the perception of emptiness, to untangle the negativity that surrounds it, and its positivity as well. Emptiness is simply something that exists, and as everything is defined by man, in different moments and in different situations, as man perceives it. The meaning we give to emptiness depends on the way we perceive it. I consider emptiness an abstract concept, and abstract art is the way to express it.

Emptiness is not only somethink that does not exist anymore, or that that has never been, most of all it is the start of what will be. Emptiness defines fullness. We shouldn’t forget that emptiness is lack of matter with plenty of energy. Knowing that the nucleus of the atom, hence its matter, is 100.000 times smaller than its diameter, we could say that matter is “almost” empty and the we ourselves are made of 99,9999999999% of emptiness, and glued together by it’s energy. Fullness gets the material things solid, but it is emptiness that defines the existence and use of things.

I’m not sure that a zen of emptiness exists, I know that Zen tries to reach illumination by emptying your mind. To do so there are rituals that will occupy the mind giving to the true self the oportunity to get rid of useless thoughts. Some of these rituals are a form of art like kanji, the art of drawings characters, or ikebana, the art of composing flowers, or kyudo, the art of japanese archery… Artistic creation has a similar status, the artist will concentrate on his work and the masterpiece he is about to create, no other thoughts are allowed.

Black is absence, lack of colour, lack of light, while red is energy, life, passion. A complementary duality that alternates. Like night and day. 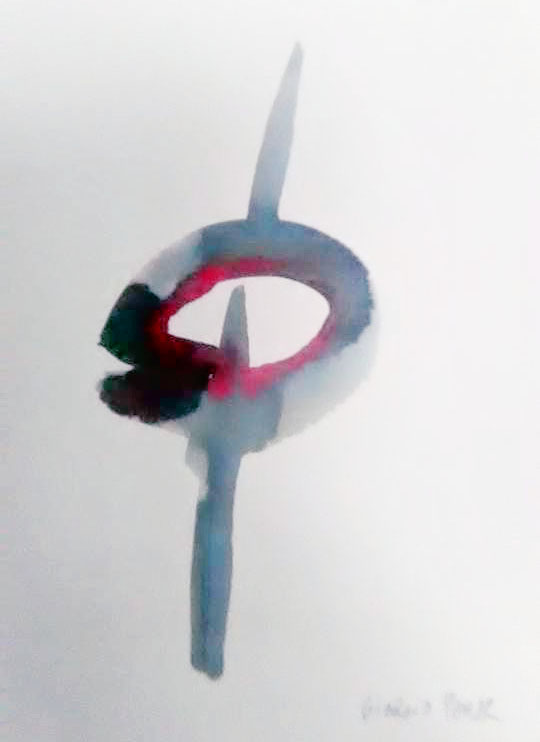 Watercolour is a play with water in which colour will fuse and melt, it will be absorbed by wet paper, that will get it back while drying. Light is given by the empty spaces. All the strokes of the brush will be seen, glazing becomes important. A good way to express myself.

It is not important what watercolour gives me, it matters only what it will transmit to the recepient, he or she that looks. A relation could be instaured.

When you work with care you know when the work is finished, sometimes you would like to go on but there is a voice that tells you it would be redundant. 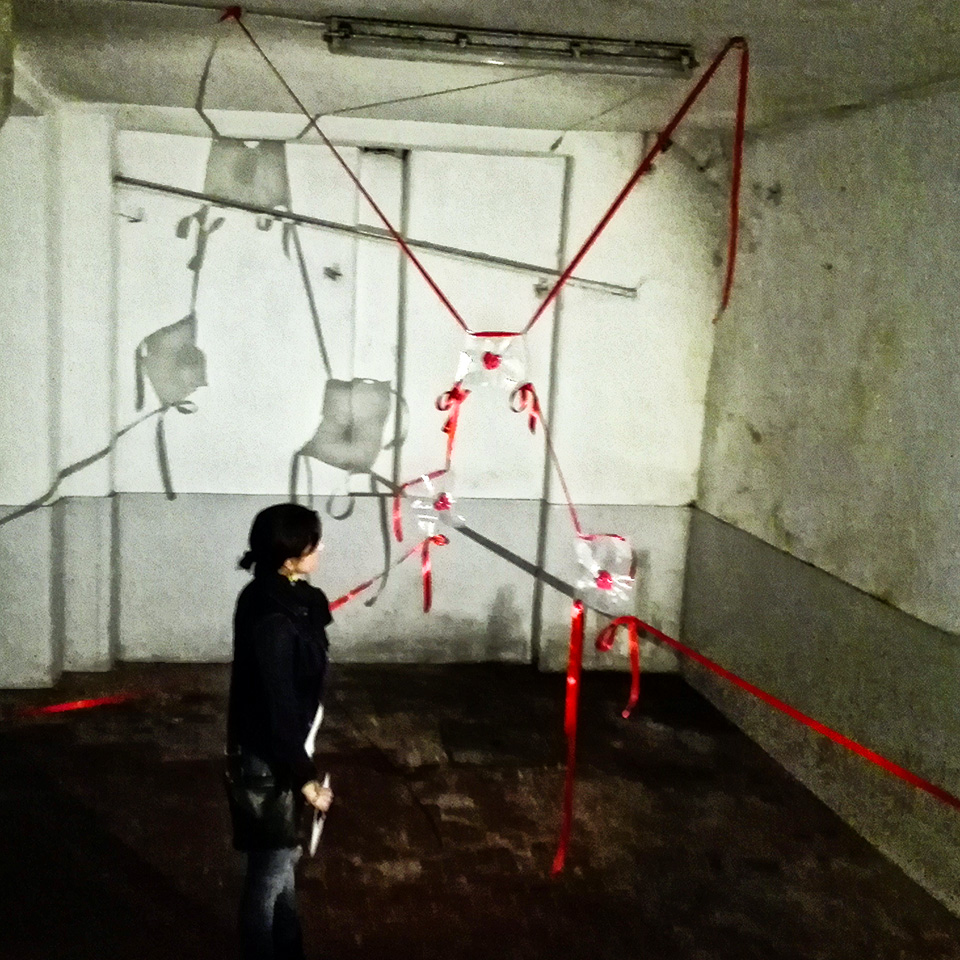 It is the space where an installation will be created that defines the project, and obviously there is a starting idea. In the case of “vacuum” the hearts are hanged with red ribbons, almost as it was a gift put away for other times, and placed in lower space. I wanted to express the feeling of oppression we get when losing somebody we love, and the emptiness that squeezes our heart. Sometimes this person we love it could be us, or not. Hanging them like if it where a torture chamber I intended to show the suffering that a “vacuum” would cause.

Space is the place we live, even if for a short moment, and we are always get involved in it. It so happens for a piece of art that will inevitably interact with the space that they are part of since the moment they are palced. The way the work of art is displayed will affect its strength. One must always take great care to prepare the space that will receive art, be it an exhibition, a permanent or a temporary location. Not only space, but light is really important, and sometimes the shadows it creates. In this exhibition, the space is a huge storage facility that ensures the feeling of emptiness, and it gave me the opportunity to hang some painting, giving them the impression of levitating, and to create evocative lights and shadows.

I have a passion for water, for sea. Several of my works are inspired by the sea, and after emptyness I think I will work on a project on water. One thing at a time. The exhibition ends the 13 of april, then we will see.

“The vacuum as shape and form as empty” as everything is emptiness, everything can be “. Nagarjuna
Giorgio Pahor