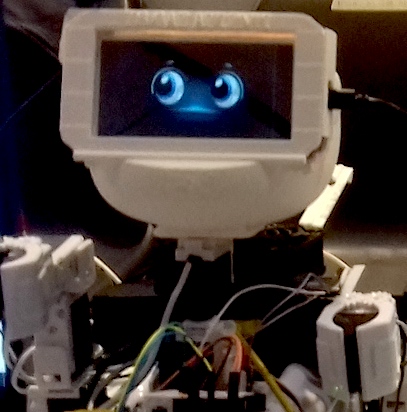 As with previous editions, Maker Faire 2018 continues to follow its vocation and hosts new developments and addresses in programming and automation.

The thousand faces of robotics and its uses at the fair have shown different devices of different sizes, shapes and functions. Like the appointment that for six years has accompanied the Roman Maker with the one love machine band of the Berlin robot artist Kolja Kugler. Video

And if robotics is also at the service of the person? It can become a useful support to our needs, especially regarding health. Starting from the applications with Arduino and the developments of AI codes, there are different applications that have been developed by the Makers, and from the research lines with some proposals that look at the well-being of the person, assistance for people with disabilities and projects European research on robotic surgery in development, such as the Neuroengineering and Medical Robotics Lab (NearLab).

CARTESIO: artificial intelligence at the service of people with disabilities 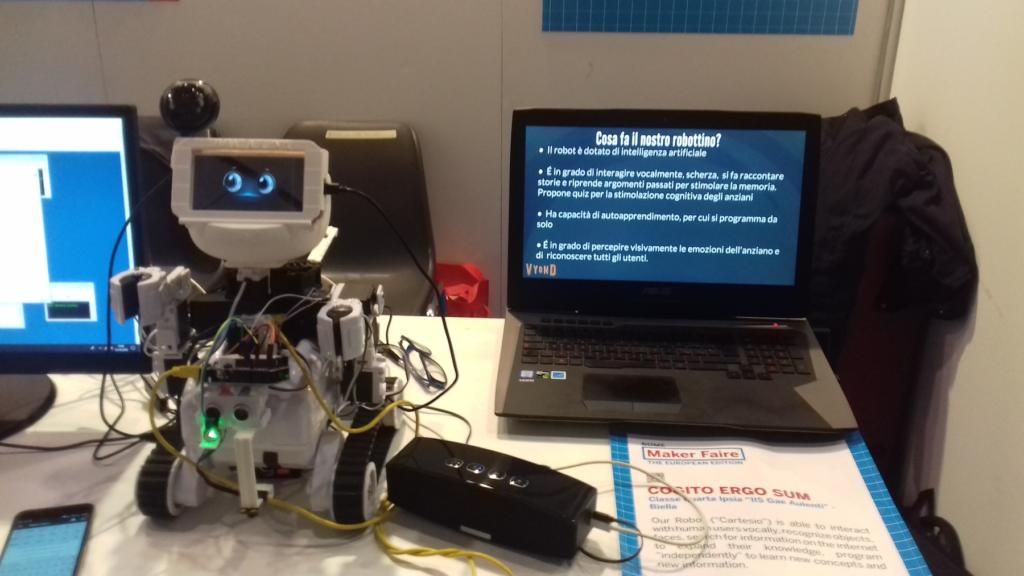 The project is called Cogito Ergo Sum, and is presented in the feature of a cute little robot with which you can start talking and exchanging information, telling stories, and doing a demotic control of our home, such as turn on-off lights, control temperature , alarm and remote door opening.

Descartes, this is his name, is able to move independently, to recognize what he sees, to “read” the emotions and facial expressions: understand if you are happy or sad, angry or bored, but also how old you have. Answer your questions and even play!

But the amazing thing is that he learns directly by himself, and everything that you are able to transmit to him even through the visual contact of a webcam. Descartes learns thanks to a software developed by Gae Aulenti’s kids led by Giuseppe Aleci and Roberto Donini, teachers of electronics, IT and programming. They started three years ago to plan AI with their students and develop systems that can work with the man, and when it’s possible to work with the sick:

“We work with disability – explains Giuseppe Aleci – because we provide customizable tools for the host homes. These are devices such as the “Friend Button” developed for the guests of the Domus Laetitiae center for speech synthesis and control of devices in infrared and bluetooth, thanks to which patients can easily request some daily functions. We are the winners of the 2018 Ancalau School Award, the new section dedicated to schools was created by Oscar Farinetti starting from this wonderful collaboration with Domus Laetitiae and the sommelier robot “.

The robot sommelier is a brother of Descartes, is called Caesar and was a guest at the International Robotics Festival in Pisa, where the robotics integrated into the agri-food sector offering a sommelier service using special sensors that allow it to analyze the color of the wine, give information on the pH, acidity level, presence of sulphites, alcohol content. Through the Microsoft cognitive services (for visual recognition) and with an object tracking technology it memorises each label and creates a sort of small wine catalog, even if its forerunner had been designed to search for survivors in case of natural disasters. While Descartes could also be used for assistance and support for Alzheimer’s patients.

Robotics, automation and augmented reality enters the operating room, at the service of medicine and health

Nadia Cattari, 25 years Biomedical engineer and PhD candidate at the Research Center Endocos of the University of Pisa talks about the application of AR in the operating room.

Through the development of the Vostars project “Video Optical See-Through Augmented Reality Surgical System (Vostars)” – the three-year project funded by the European Commission with 3.8 million euros in the context of Horizon 2020, coordinated by the Department of Information Engineering ‘University of Pisa with other partners – it is possible to have on a screen the projection of the intracranial lesion on which the surgeon can go to work and make incisions with maximum precision. To help a hybrid program of video and optical seetrought that allow through viewers or glasses to be able to have a faithful reproduction of the area where you will have to operate.

Alice Segato, 24 years Informatic and biomedical engineer at the Politecnico di Milano shows us how the project EDEN 2020 should work – which brings together a team of researchers from international institutes, including the University of Milan and the University Vita-Salute San Raffaele, with the expert guide in medical robotics of the Imperial College of London, with a funding of 8.3 million euros from the European Commission within the Horizon 2020 program to develop and test a new generation flexible and controllable robot probe in four years.

Eden2020 deals with the development of devices for bioethical diagnosis. With the use of “robotic catheters” (thin and flexible cables) that will work as a probe, it will be possible to reach and treat the deep regions of the human brain in complete safety for the patient. Through the catheter management program the robotics will enter the operating room and it will be possible to plan the implementation of minimally invasive surgery in the areas of the brain with the possibility of biopsies, chemotherapies and intervene on diseases such as Parkinson’s.