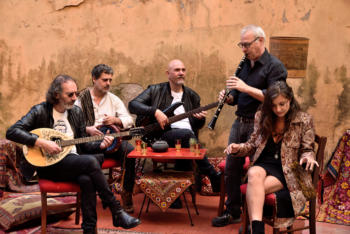 “Mediterraneo ostinato”, finalist at Targhe Tenco 2021 in the dialect and minority languages section, after having conquered the 2nd place of the World Music Charts Europe, the international classification drawn up by the journalists of the EBU circuit, entered the Transglobal Music Chart, and placed 11th among the 20 best world music records released in 2021.
Saletti & Banda Ikona’s album has thus become a sort of manifesto for a possible new “Mediterranean Power” in the name of a past made up of art, culture, open ports, encounters and exchanges which, like a great network, have intertwined to create new paths, shared stories and a common Mediterranean soul.

Sung in Sabir, the ancient language of the Mediterranean that Saletti has brought back from the oblivion of history to revive, the album includes his original compositions that also draw on the great heritage of Mediterranean literature from Calvino to Pasolini to Alda Merini, from Matvejevic to Machado and Kavafis, from Cecco Angiolieri to Rilke and the Kurdish poet Abdulla Goran.

As Stefano Saletti points out: “We sing and play a Mediterranean that is obstinate, fighting, resistant and does not give up. Stubborn as we Mediterranean peoples are, strong, ancient, stubborn. Stubborn like the repetition in music that becomes a daze, a trance and a ritual to which we abandon ourselves. Because everything is held in the Mediterranean: the sunny squares at midday and the darkness that accompanies the routes of migrants, joy and despair, good and evil“.

The concert is part of the programme of the eleventh edition of “Errare Humanum Est“, a folk and world music festival organised by Finisterre, designed to tell the story of musical journeys along the most curious routes. 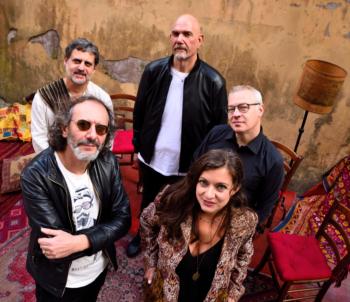 BIOGRAPHY STEFANO SALETTI & BANDA IKONA
Created by Stefano Saletti (former founder and soul of Novalia) the Banda Ikona brings together some of the most prestigious Italian world music musicians such as Barbara Eramo, Gabriele Coen, Mario Rivera, Giovanni Lo Cascio, with the collaboration of many other artists, both live and in the studio.
In their original compositions, the group uses Sabir, the lingua franca spoken by sailors, pirates, fishermen, traders and shipowners in the ports of the Mediterranean: from Genoa to Tangiers, from Thessaloniki to Istanbul, from Marseilles to Algiers, from Valencia to Palermo. Saletti and the Banda Ikona have taken this sort of maritime Esperanto, gradually formed with terms taken from Spanish, Italian, French and Arabic, and have brought it back to life by writing intense pieces that cross the sounds and cultures of the Mediterranean, and combine with the atmospheres of the southern folk tradition and Balkan, Greek and Sephardic melodies. The result is a fascinating journey through the sounds and cultures of the Mediterranean in search of a musical and lyrical language that unites the many different peoples who border the same sea. Predrag Matvejevic, a Croatian intellectual and writer, wrote: “There is not just one Mediterranean culture: there are many within a single Mediterranean”.
In their music, the group uses instruments such as the Greek bouzouki, the Arab oud and the darbouka, along with those of the Western tradition. The result is a fascinating world-Mediterranean, mestizo folk, a rich mixture of rhythms and melodies, suggestions and colours.
March 2021 saw the release of the new CD “Mediterraneo Ostinato” (Finisterre) with original songs sung in Sabir, drawing on the great heritage of Mediterranean literature from Abdulla Goran to Calvino, from Pasolini to Alda Merini, from Matvejevic to Machado and Kavafis, from Cecco Angiolieri to Rilke.
The previous CD “Soundcity: suoni dalle città di frontiera” (2016) has received great recognition in Italy and abroad: it was three months at the top of the WMCE World Music Charts Europe, in the Top ten of the Transglobal Music Charts, disc of the month for the prestigious English magazine FRoots and for Blogfolk; in the final five of the Premio Tenco in the dialect and minority languages section. Saletti has travelled with his music from Lampedusa to Istanbul, from Tangier to Lisbon to Jaffa, Sarajevo and Ventotene, and in these places he has recorded sounds, noises, radios, voices and sound spaces. Starting from all this material, he has composed a fresco of sounds that recounts the difficult dialogue between the north and south shores, the dramas of migrants, the wealth, the hopes and the pain that cross the “roads” of the Mediterranean, sung, as always, in Sabir, the language of the sea and of possible dialogue.  In the previous work entitled Folkpolitik (also published by Finisterre in 2012), alongside original compositions, there were rearrangements of pieces by Mediterranean authors who had recounted in music their struggle against power, suffering persecution, arrest and violence. Folkpolitik was also at the top of the WMCE World Music Charts Europe for three months.
“Marea cu sarea’, a Romanian saying meaning ‘to promise the sea with salt’, i.e. to promise and not keep, is the title of the group’s CD, released in January 2008 by Finisterre. In 2005 the band released their first CD, “Stari Most”, the name of the Old Bridge in Mostar, Bosnia, which collapsed in 1993, and which has always represented the symbol of the meeting and the passage from West to East. The bridge was pulled down by those who wanted the logic of inter-ethnic and inter-religious conflict to prevail over the logic of dialogue and peaceful coexistence. In both music and lyrics, the work unfolds as a sort of concept-album on the theme of the encounter between different worlds that must return to dialogue together, at every level.  Tagama, taken from “Stari Most”, was included in February 2006 in Buddha Bar vol. VIII and in October 2006 in Buddha Bar Ten Years, which contains the best of the production of the famous compilation of the French label GeorgeV. Tagama was also included on the CD of Folk Roots (August/September 2006), the prestigious English magazine of world music. This is yet another success for the CD “Stari Most”, which has already been included in the list of the best records released in 2005 compiled by World Music Charts Europe and in fourth place in the Folk Roots classification.
Saletti and the other members of the Ikona Band, as well as performing at the main folk, world and ethnic music festivals in Italy and around the world, have for years been holding workshops and seminars on the Sabir language, on the performance techniques of string and percussion instruments, on vocal techniques, and on the contaminations, influences and specificities of the many musical styles of the Mediterranean.