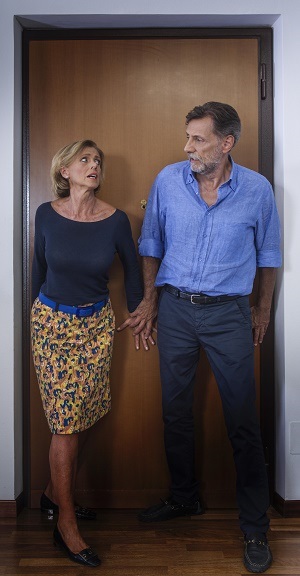 The script addresses a topic with gentle irony anything but fun: the banks’ fraud against the citizens … a small great tragedy of our times and of our country. The protagonists, in fact, the two spouses, Pino and Mariuccia, once would have also been two wealthy intellectuals: he is a university professor, but still classified as a researcher, she is a translator from English of children’s books. They not got rich, but they would be equally happy, if the bank had not drained all their savings with fraudulent investments. And moreover, there is also a son abroad (present as a voice on skype) that could make a brilliant career, but still needs the support of parents. Their only asset is the house, but on the seventh floor of a tower block in the suburbs, in a neighborhood that the university neighborhood has made attractive to speculators.Indeed an estate agency bought the building, which wants to restructure to sell their apartments at prices increased tenfold, and has already evicted all the old tenants. Not them, of course, but to own means having to pay its share of the renovation, a huge figure, while the emissaries of estate agency pressed with “warnings” threatening, they have the beautiful and damned face of Angelo, a twenty year old and cynical armored. But just this character, at the beginning hated enemy, will be the one who helps them to find the way out …
The show is fun and enjoyable, but it also offers profound insights on an issue more topical than ever and burning, or how the economic crisis has depleted morally as well as economically people, making obsolete and sometimes laughable values such as honesty, solidarity and fairness. Pino and Mariuccia as romantic heroes of the past stubbornly defend the values they believe in against all odds, also supported by a mutual love that has withstood the test of time shock and disillusionment. This their “whiteness” in the end will breach even in the young and aggressive real estate agent from which the two spouses, however, also have something to learn to get by in this society full of sharks. 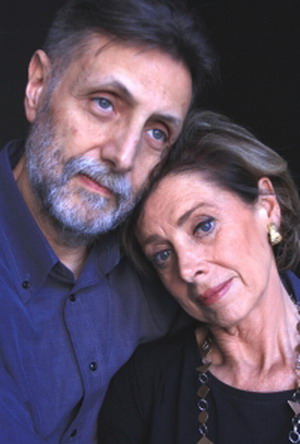 You can not smile often during the show, despite the bitterness of the theme dealt with, both for the wealth of daring twists in the plot is for the delicate interpretation of Gianna Paola Scaffidi and Rosario Galli that make them particularly credible and sympathetic to the public the two poor spouses messed up; also they are irresistible and funny even the scenes of conflict with the well-hatched young real estate agent played by the young and talented performer Elia Paniccia. Appreciable also the choice of music used to the transition from one picture to another, representative of that generation of dreamers who the protagonists belong and that makes them so difficult to understand the ethical degradation that our society is undergoing.
It is hoped that this script will soon be repeated in other Roman theaters to how he manages to cope with elegant lightness one of the most dramatic problems and bleak that the economic crisis in our country has caused.
WHERE WE SEEN: CONCIATORI THEATRE, Via dei Conciatori, 5
WHEN: from the 18th of October since 30, 2016