On the stage of the Argentina Theatre Jabob Olesen plays Primo Levi, to represent intensity and lightness of the word and thought of “Se questo è un uomo”, the story of his experience in the Auschwitz concentration camp, where the Holocaust took place.
A journey to discover a human being history and that of his dead companions through a recital directed by Giovanni Calò.

“Sometimes you survive to tell a story. Primo wants to give voice to his witness because you can not forget, you do not.”
Giovanni Calò – Director

He is a witness of atrocity but doesn’t miss humanity in his everyday life. The same with the characters played by Olesen himself, who even if destroyed by violence and conflict, they try to survive. The conclusions of this story rich in memories and life are left to the audience.

Acting is involving, never leaves you, it is fit for adult and young audience. The literary recital is part of two projects of the Rome Theatre “Il teatro fa grande” e “Il dovere della memoria”. It is useful to grow up, but also not to forget our own history. Scenography is essential and evocative, lights are minimal but dynamic. Well, a very good mix of theatre. 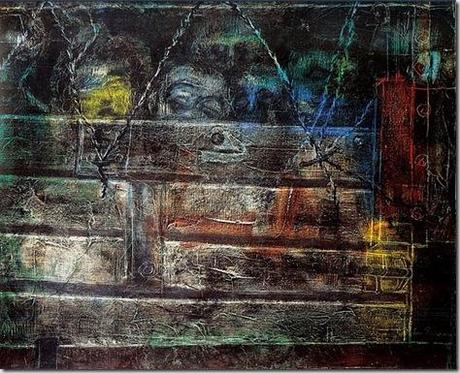 FACE TO FACE WITH JACOB OLESEN*
At the end, the generous protagonist spent some time on the stage even after the recital, to answer the young audience questions.

Why did you choose this text?
To remember history since there are always more and more Neo-Nazis parties in Europe, always fewer survivors and it is easy to fall down in the same story, happened only 70 years ago. Not last to fight against Holocaust denial.

What does the scenography mean?
There are big panels from Eva Fischer’s paintings. The deported train, the pile of shoes and some faces push the audience imagination and stress the same recital emotions.

Why only one actor on the stage?
It is very interesting to play more than one role through many voices and languages.

Where does the recital go?
We have already been in Germany playing in the native language, where we felt a lot of tension among the audience and in Moscow with subtitles videos. We will go to Paris and Budapest too

*To know something more about Jacob Olesen  clik here