Not to be missed, on stage until 21 January “Il fu Mattia Pascal” at teatro Ghione in Rome, directed by Claudio Boccaccini.

The theatre hall filled with an audience participant and satisfied he showed his appreciation with thunderous applause at end representation..

The work of Pirandello, made intelligible and easily enjoyable thanks to a Masterful adaptation curated by Eleonora Di Fortunato and the same Boccaccini, tells a complicated story of Lyndon, forced-at the end of a tortuous path of Thumbprint through fake fake deaths and “paradoxical lives”–to give up voluntarily the real existence when he realizes that they cannot live “outside the rules”.

Mattia Pascal, in fact, crushed by the weight of a “first life” unsatisfactory, tries in vain to avoided inventing a new identity but has no roots, because “stolen” to a suicidal you do not know the name.

That died that no one complains, is recognized by family members as the body of same Pascal, who takes advantage of the opportunity to physically disappear from his old reality and start from scratch its existence in another city, assuming a fancy name, Mahadevappa Mahesh. But the project fails. Lack of records and then “cannot denounce the wrongs that are facts or rebuild a new life with the woman he fell in love.”

Expertly directed the actors Felice della Corte, Alessia Navarro, Siddharta Prestinari, Paolo Perinelli, Maurizio Greco, Pierre Bresolin and Ilaria Serantoni ,each of which gives the perfect relief to the character who is called upon to interpret 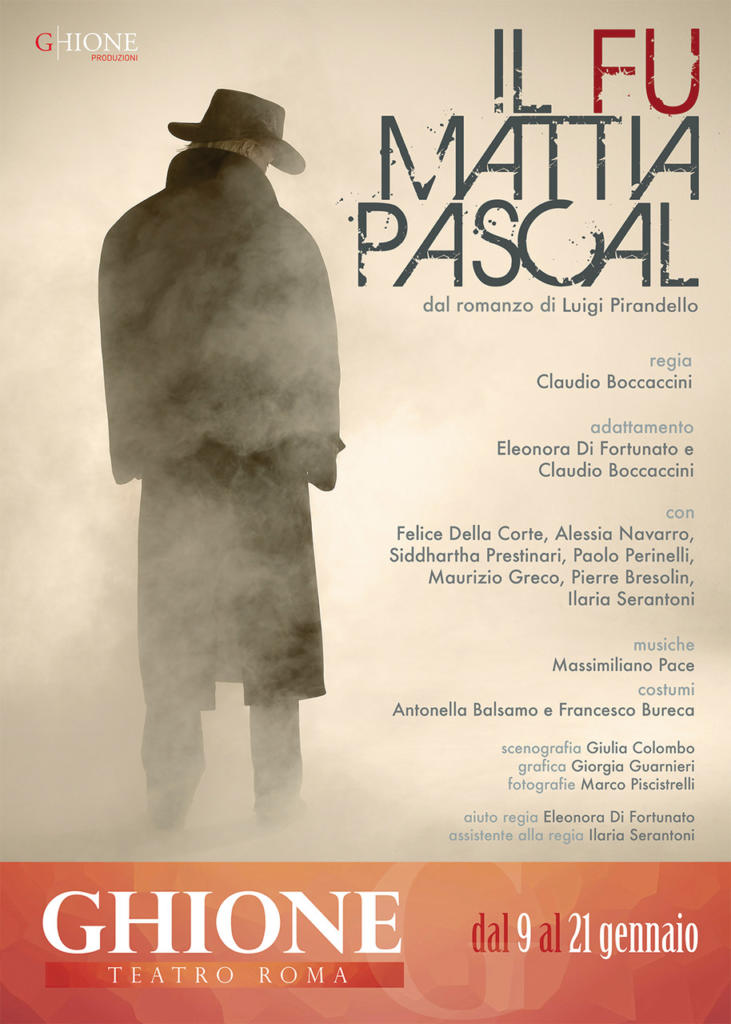 Mattia Pascal, dissipated his father’s inheritance and the victim of an unbearable matrimonial life, unexpectedly wins a considerable sum at roulette. While he is back home, determined to redeem himself, he discovers that he has been identified in the corpse of a suicide. He decided then to seize the opportunity to abandon the identity of Mattia Pascal, to whom he associates the idea of ​​existential failure, and to adopt the name of Adriano Meis, with whom he can start a new life. But he will have to deal with the limits of an existence outside the social rules: not having documents, he can not denounce the wrong done, or rebuild a life with the woman he fell in love with. Frustrated by this condition, he decides to renounce the new identity too, this time staging him a suicide. But, back home, the revived Mattia Pascal is also excluded from his old life, which went ahead without him. Once the illusion of being able to reach happiness and freeing himself from social conventions has vanished, all that remains is to see that he is nothing but “Mattia Pascal”.

The adaptation exploits the presence in the novel of theatrical elements and a syntax close to orality, making usable a fundamental work of Pirandellian reflection on the “double” that lives the lives of all of us and on the shattering of identity in a society that he forgets, substitutes and proceeds mercilessly for individuals.

Unlike classical heroes – among them, Ulysses and Edmond Dantès – who are recognized in the name of the continuity of human identity, Mattia Pascal is a modern “hero” whose story, through a double suicide and a double resurrection, only apparently returns At the beginning: Adriano Meis can not go back to being Mattia Pascal, because he is prevented by social conventions and his own conscience. In short, they are precluded both the nostos, both the recognition and the revenge: Oreste becomes Hamlet, Ulysses remains Nobody.