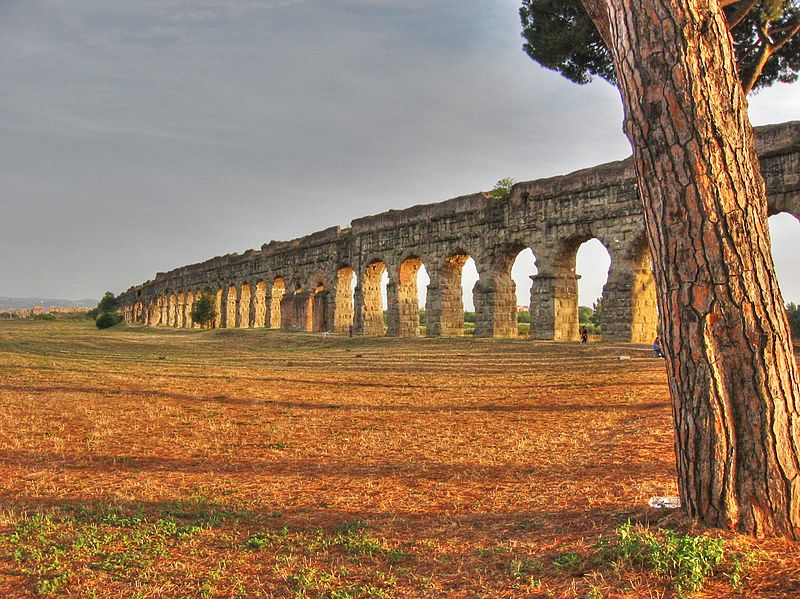 The Romans’ skill in civil engineering is one of the things that contributed greatly to the establishment of their civilization and empire. Their roads, bridges, temples and great public buildings still stand as a testimony to their greatness, but it is the Roman system of supplying water to their cities that distinguishes the Romans as an advanced, modern civilization.

The supply of water is the first critical issue in a community, and the Romans solved the problem of supplying it by calling on their civil engineers to plan and build a centralized water distribution network and sewage system for every major town or city in the Republic. By the time of the late Republic and early Empire (100 BC ‘ 50 AC), Rome could boast one million inhabitants and several cities were home to several hundred thousand souls. The water supply to Roman cities had to reliably provide a continuous supply of fresh, clean water in order for these cities to survive. Likewise, an efficient sewer system had to be able to carry away wastewater from homes and buildings. Essentially, the way the Romans were able to supply water to their cities and cause the fountains in their cities to flow continuously was to use a system of aqueducts with a constant gradient (slope) and a system of cisterns and manifolds to hold and distribute the water. The aqueducts and tunnels through hills that have survived have gradients ranging from one foot drop per 150 feet of length to one foot drop in about 500 feet of length. The Roman engineer Vitruvius recommended a gradient of not less than 1 in 200.

The aqueducts usually went through tunnels when a hill lay in the way between a town and a water source. When the aqueducts crossed valleys or low places, they were built on top of arched causeways (sometimes, when a very high aqueduct was needed, there were three courses of arches, such as Pont du Gard near Nimes, in France).

After the water had flowed down the aqueduct into the town, it was usually directed into a manifold, or large distribution tank which feeds several large water mains that lead off into different areas of the city. This structure was constructed of masonry walls and was situated far enough above street level to cause water to flow at a reasonable rate, through gravity, into the city or town’s water mains. These water mains were pipes made of sheet lead or terra cotta. The fountains were located on many street corners and water flowed into them by gravity. The excess water would flow down into another set of pipes to feed other fountains at lower levels throughout the hilly city of Rome. Finally, water would flow from the last in a chain of fountains into the cloaca, or city sewer system which would then discharge into a river as sewage. It was not the Romans’ practice ‘ as Queen Christina of Sweden noticed in the late Seventeenth Century – to turn the fountains off even though they knew how to build a valve to control the water.

In Rome, the aqueducts and the fountains that Romans fed have been in use for centuries. Many of the ones in use today were built by the Romans between 312 BC and 200 AD. The first of Rome’s eleven ancient aqueducts was built by the censor Appius Claudius Caecus (the same who built Via Appia) in 312 BC. During ancient times, the city of Rome had between 1200 and 1300 public fountains, eleven large scale public baths, 867 smaller baths, and two artificial lakes used for mock naval battles. The city’s eleven aqueducts delivered 38 million gallons of water to the city every day.

All our knowledge about the history of the Roman aqueducts came from a very detailed record of the design and costruction of Rome’s water supply titled De Aquae ductu Urbis Romae (The Aqueducts of the City of Rome) prepared ‘ around 97 AC – by Sextus Julius Frontinus, the ‘curator aquarum’ or city official in charge of water supply.