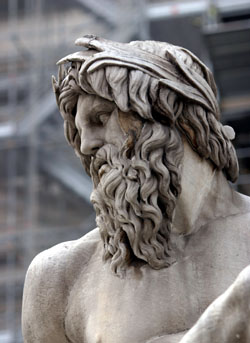 A lot of important monuments and sites in Rome can be experienced for free (in italian free=gratis).

For example you can visit the most important sites such:

For free only the last Sunday of the month:

In Rome It’s easy to find most of masterpieces for free:

The Ecstasy of Santa Teresa
Santa Maria della Vittoria. Via XX Settembre, 17., corner of Largo S. Susanna. Mon-Sat 8:30am-11am / 3:30pm-6pm ; Sun 8:30am-10am/ 3:30pm-6pm (In August 7:30am-11:30am only) Bus 492 or 175 to Largo S. Susanna, or a short walk west from Termini.
The Blessed Ludovica Albertoni
San Francesco a Ripa. Piazza S. Francesco d’Assisi, Trastevere. 7am-7pm. Tram 8 two stops down Viale Trastevere or Bus 23 to Ponte Cestio.
Inside St. Peter’s Basilica
The baldacchino (bronze canopy), Cathedra Petri (the chair of St. Peter), the monument to Pope Urban VIII, and the monument to Pope Alexander VII are all by Bernini. 7am-7pm. Metro Line A: Ottaviano or Bus 40 Express to Piazza Pia.
Outside St. Peter’s Basilica
The square and colonnade. If you stand on one of the dots about 20m away from the obelisk, all four rows of columns magically fall into one. Metro Line A: Ottaviano or Bus 40 Express to Piazza Pia.
Fountain of the Four Rivers
In Piazza Navona. Bus 40 Express or 64 to Largo Argentina .
The Elephant Obelisk
Outside Santa Maria Sopra Minerva. Bus 40 Express or 64 to Largo Argentina .
Ponte Sant’Angelo
An elaborate bridge lined with Baroque statues, a great place to be at sunset, and a beautiful spot for taking pictures of St. Peter’s. Bus 40 Express or 64 to the end of Corso Vittorio Emanuele.
Sant’Andrea al Quirinale
An elegant little church at the corner of Via del Quirinale and Via Quattro Fontane. 9am- noon / 4pm-7pm daily. Metro Line A: Barberini or bus 492 or 62 to Via Quattro Fontane.

Also you can visit, for free:

The Capitoline Hill (Piazza del Campidoglio)
This spectacular Renaissance piazza is one of the best place in Rome , especially at sunset and later. In the middle of its Michelangelo-designed pavement, there is a bronze statue of the Emperor Marcus Aurelius on horseback (a copy of the original which is now inside the Capitoline Museums). From the terraces on either side of the Palazzo Senatorio there are beautifull views over the Roman Forum.

The Aventine Hill (Aventino)
The Orange Garden (Il Giardino degli Aranci) offers one of Rome ‘s most picturesque gardens, with a beautiful view over the Tiber and Trastevere. Just up the street (about 50 meters from the end, on your right) from the Orange Garden , you’ll find a small key hole in a large green door that offers a memorable view of the dome of St. Peter’s.
It’s possible to arrive by Metro Line B: stop at “Circo Massimo”, then walk north along the Circus Maximus and turn left up the hill ,Via Valle Murcia to Via di Santa Sabina.

The Janiculum Hill (Gianicolo)
Look down over all of Rome ‘s monuments. Reach the summit by walking from Via Garibaldi, Trastevere. There is a cannon that goes off every day at 12.00 am . By Bus n.870 from Piazza Fiorentini (near Corso Vittorio Emanuele, where it meets the Tiber ).

The Pincian Hill (Pincio)
Part of the Borghese Gardens , raised up above Piazza del Popolo, close to the Spanish Steps. From here there are spectacular vistas of Rome, you ca see St. Peter’s and the Victor Emanuel monument. By Metro Line A: stop at “Spagna”.

Moses
Inside St. Peter’s in Chains (S. Pietro in Vincoli) 7am-12.30pm / 3:30pm-6pm , daily. Off Via Cavour. Metro Line B: Cavour.
Pieta’
St. Peter’s Basilica. 7am-7pm. Metro Line A: Ottaviano or bus 40 Express to Piazza Pia.
Christ Carrying the Cross
Santa Maria Sopra Minerva. Piazza della Minerva, near the Pantheon. 7am-7.30pm. Bus 40 Express or 64 to Largo Argentina .
Capitoline Hill
Piazza del Campidoglio and the steps leading up to it (the cordonata). Bus 40 Express, 170, or 64 to Piazza Venezia.
The Dome of St. Peter’s Basilica
Access to the top 8am-4.45pm . ? 4 to walk the entire way up; ? 5 for the elevator to the halfway point–from there you’ll have to walk 20 more stories of a narrow and slanted stairway to get to the top, but the view over Rome once you’re up there is exhilarating! Metro Line A: Ottaviano or Bus 40 Express to Piazza Pia.

Every the parks and gardens in Rome are for free:

Villa Borghese
Huge park with long avenues of trees and picturesque villas, which double as museums and galleries, dotted throughout. If you don’t have time to wander through all of it, at least go to the Pincio, the look-out above Piazza del Popolo. Metro Line A: Spagna or Flaminio. (more info)

Villa Ada
Only part of this park is open to the public. Open from dawn to sunset. Bus 38 or 310 to Piazza Istria . (more info)

Villa Torlonia
A beautiful villa and garden, once Mussolini’s family residence, it then fell into disrepair and is now being restored. The garden contains many exotic plants and large trees. A new museum has opened in the Casina delle Civette, remarkable for its stained glass windows. Bus 36 or 62 to Via Nomentana/Torlonia.

Villa Aldobrandini
A small and serene villa, raised up with a great view, provides tranquility in the heart of the city. At the bottom of Via Nazionale, entry on Via Mazzarino. Bus 40 Express or 64 to Via Nazionale. (more info)

Villa Celimontana
A beautiful villa between the Colosseum and the Baths of Caracalla. Metro Line B: Colosseo.

Parco degli Scipioni (Park of the Scipios)
Excavations carried out in the late 19th century unearthed the remains of the tombs of the Scipios, an influential Roman family in the 3rd century BC. Nowadays just a pleasant stretch of greenery and intermittent archaeological sites between the Baths of Caracalla and the Appian Way .

Villa Pamphili
This huge park dating back to the 1600s, redone in the mid-1800s, has formal gardens and lawns and is popular with runners and dog-walkers, although it is a bit far from the sights. Bus 40 Express to Chiesa Nuova, or 64 to the end of Corso Vittorio Emanuele, then bus 870 from Piazza dei Fiorentini. (see more)

Also for free many thrilling and mystic sites in Rome:

Crypt of the Cappuccini Monks, in Santa Maria della Concezione
The crypt ceiling and walls are elaborately decorated with the bones of 4,000 monks. Trust us: this is not to be missed. Via Veneto , 27 – 20m up from Piazza Barberini. At the time of writing the crypt is closed for structural repairs (06 487 1185 for more information). Metro Line A: Barberini or bus 492 or 62 to Piazza Barberini.

Museo delle Anime dei Defunti
This may be the weirdest museum in Rome , devoted to the souls of the dead trapped in purgatory who keep leaving messages for the living. (!) Inside the church of Sacro Cuore del Suffragio , Lungotevere Prati, 12. Free. 7:30am-11am (10am in the summer)/ 5pm-7:30pm . Bus 492 to Piazza Cavour.

Santa Maria Sopra Minerva
Here lies the body of St. Catherine. After her death, it was separated from her head, which remained in Siena , the town where she was born. Piazza della Minerva, near the Pantheon (look for the elephant obelisk outside the church). 7am-7pm. Bus 40 Express or 64 to Largo Argentina , or 116 to the Pantheon.

Sant’Agnese in Agone
Look for the door marked “Sacra Testa di Sant’Agnese” inside this Borromini architectural gem. Little Agnes was decapitated in the stadium of Domitian (now Piazza Navona) in the 4th century and her head has been here for centuries as a relic. (The rest of her body is several miles away at the church of Sant’Agnese Fuori le Mura on the Via Nomentana.) Piazza Navona. Bus 40 Express or 64 to Largo Argentina , or 492, 81, or 87 to Corso Rinascimento.