Wandering around the very heart of the city; the history, the places and the curiosities?
by Roberta Rossetti

The name of this rione derives from the Latin Campus Martis (“field of the God, Mars”), it was a huge area, about 250 hectares, next to the river Tiber, dedicated to the war God during the Roman period. On this land military and sport activities were practiced until the late Imperial period, and many buildings were built like Circus (for athletics and chariot racing), a gymnasium, temples, obelisks, and others. 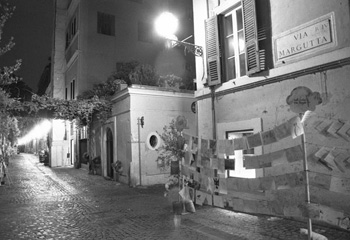 The most famous Roman monument built in this area is the “Mausoleo di Augusto.” It’s a grave commissioned by Augusto himself as his final resting place alongside his family. 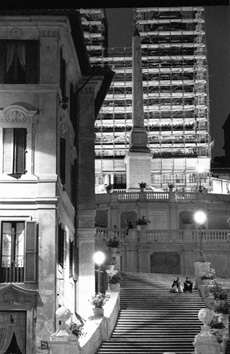 It was a magnificent grave whose dimensions have never been seen before; more than 44 meters in height and 89 meters in circumference,  and located near a wood area of laurels and cypress trees where it was possible to take a walk. On the top there was a bronze statue of the Emperor, but during the Middle Ages it was melted to make coins. For centuries it went to rack and ruins and was used as a quarry for marble and travertine. During the XIX-XX centuries it was used as a theatre and auditorium for concerts until 1936 when it was considered as the other Roman ruins and destined to be preserved and visited by the public. Nowadays, it is considered to be full of ghosts, among which Augusto himself and Cola di Rienzo who was tortured and burnt on this site.

Not far from Campus Martius there’s the Pincio hill where the rich ancient Romans used to build their villas and gardens. During the late Middle Ages, a small community who had come from Illiria (Croatia) settled here and founded its own church named S. Giacomo degli Illirici, still existing today. 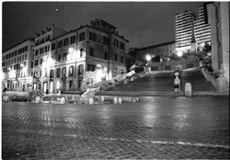 In the XVI century the Borghese family built their mansion, “Palazzo Borghese,” in this rione, and it took more than 50 years to be completed. This palace is near the city’s second fluvial harbor, Ripetta (small bank), which was active since the XIV century. But it was mostly used in the XVIII century when a long staircase, composed of great travertine blocks that had fallen down from the Colosseum after an earthquake, was built to reach the river.
This harbor was demolished at the beginning of the XX century to allow for the construction of the walls along the river and of a bridge named “Ponte Cavour”.
The most outstanding places of Rione Campo Marzio are Piazza di Spagna and Piazza del Popolo. 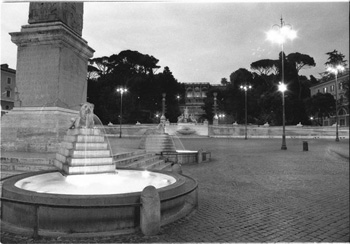 Piazza di Spagna is worldwide famous for its steps climbing to Trinità dei Monti; these steps were built between 1723 and 1726. Just in front of the steps there’s the “Barcaccia,” the fountain made by Pietro Bernini to represent a boat nearly submerged which was dedicated to the memory of a great flood that had happened in 1598 when a boat was really found in this place.

Following via del Babbuino, Piazza del Popolo appears; it is an extraordinary place where three very important streets, called “il Tridente”, (via del Corso, via del Babbuino and via Ripetta) converge. Building this area took more than three centuries; the last construction was made in 1824 by Valadier, who gave the square its neo-classical character. These last works didn’t cost the Pope a dime since he used the labor of life-term prisoners.
The square is characterized by the presence of many wonderful items: two twin XVII century churches built in the place where via del Corso begins, and on the other side of the piazza there are two hemicycles, each one decorated with a fountain and statues
In the cente there’s an Egyptian obelisk put there in 1589 by Sisto V, and decorated in 1823 by Valadier with 4 circular basins and 4 lions. The northern side of the square is closed by “Porta del Popolo” which was built in the first half of the XVI century and completed by Bernini with the interior facade in 1655.
The present aspect of the Rione dates back to the XVII-XVIII centuries when the southern part of this ancient rione was divided among various rioni; many palaces built in that period still stand today. 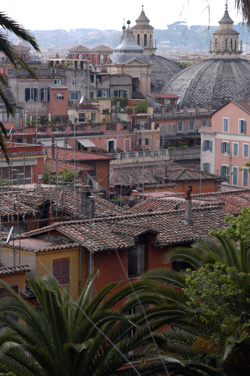 Today, Campo Marzio covers the part of the city that people usually identify as its real heart. During the day it is very crowded because it is full of shops and people wandering around. So, probably the best time to visit this area and to fully exploit its fascinating and unique atmosphere is at night.

Via dell’Oca was previously called via delle Lavandaie (lit. “washerwomen street”) because of the many public wash-houses as it is still testified by a tablet put in the courtyard of Santa Maria in Campo Marzio church. The marble tablet urges women to wash their consciences as they do their laundry.

Once upon a time on via di Ripetta, in the hemicycle where presently there?s the Institute of Fine Arts, the Finance officer appeared in the window to announce the drawing of the lottery.

The most beautiful steps of this rione aren?t those in piazza di Spagna, but in Palazzo Ruspoli. These 100 steps were made from a unique block of marble by Martino Longhi il Giovane.