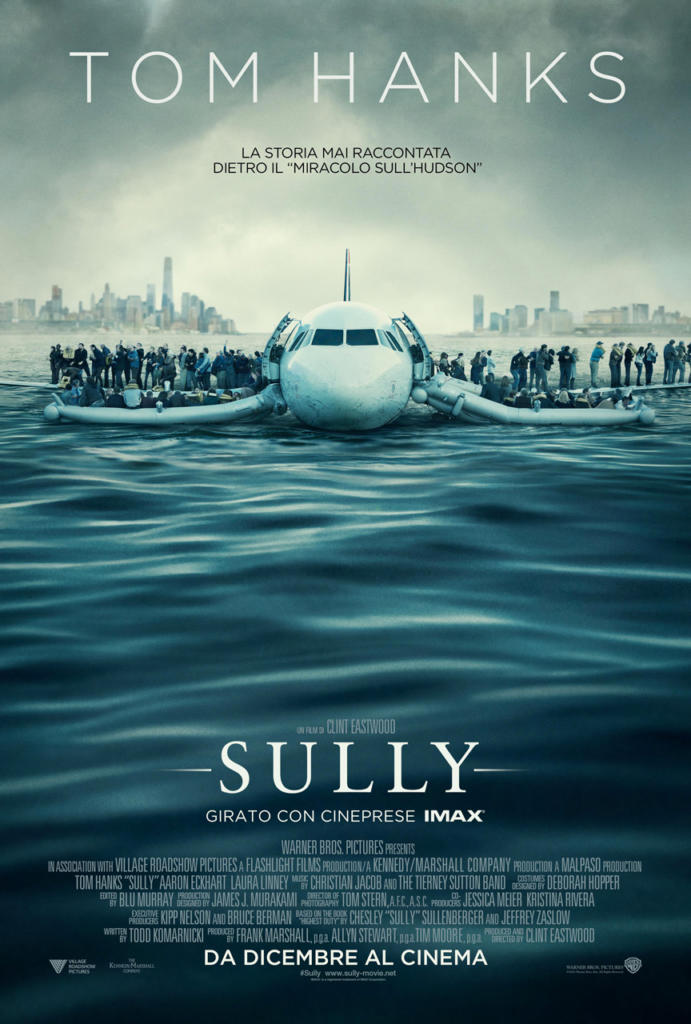 A first order director, with five Academy Awards, five Golden Globe Awards and three David di Donatello. Versatile artist; actor, director, composer and film producer, Clint Eastwood was born in San Francisco, from a Protestant family with Irish roots, Scottish, Dutch and English.
We have seen the preview of Sully, the latest film in which Eastwood proves his great director skill. Behind works such as ‘Mystic River’, ‘Gran Torino’ and ‘Million Dollar Baby’, which won two awards for best film and best director.

With Sully the director decides to tell us the miracle of the human factor and the feelings of a great commander.

January 15, 2009, the world witnesses the “Miracle on the Hudson” when Captain “Sully” Sullenberger makes an emergency ditching his plane in the frigid waters of the Hudson River, saving the lives of all 155 passengers on board . However, even if Sully is praised by the public and by the media, considering her as an unprecedented heroic undertaking, some investigations on the decision taken, threaten to destroy his reputation and his career.

The film directed by Eastwood is based on the screenplay by Todd Komarnicki, based on the book written by the same Highest Duty Sullenberger and Jeffrey Zaslow. Manufacturers are Clint Eastwood, Frank Marshall, Allyn Stewart and Tim Moore, while Kipp Nelson and Bruce Berman serve as executive producers.

SULLY: Nobody warned us. Nobody told us of the loss of both lower altitude engines in aviation history. “Brace for impact – your head down, you are down!”

Shortly after taking off from LaGuardia Airport in New York, a flock of birds hitting the US Airways Flight 1549, causing a failure to both engines just 2,800 feet, followed by an immediate emergency landing. An unprecedented event. “No one had ever been trained to a similar situation,” notes Tom Hanks, are the captain Chesley Sullenberger in “Sully”, the director and producer Clint Eastwood.

In addition to narrating the facts that really happened on that cold day in January 2009, the film explores his real consequences. The plane was carrying 150 passengers and five crew members, and none of them have lost their lives: either in the air or in water. But, as revealed in “Sully”, in the days of what quickly became known as the ‘Miracle on the Hudson’, the pilot with years of experience and proven professionalism, able to be calm in the face of potential catastrophe, will be called several times to defend his actions in front of the National Transportation Safety Board (NTSB), an independent investigative agency of the United States Government which investigates and issues reports about accidents involving airplanes, ships, trains, oil and gas pipelines.

Clint Eastwood says: “Whoever is able to make decisions when things go wrong, and it will solve a problem without panic, is a person worthy of being represented in a film. But for me, the real conflict is occurred later, when questioned his decisions despite having saved many lives. ”

“I’m not a pilot – Tom Hanks says – but I guess no one is necessarily capable of making a landing like that. Captain Sully was pragmatic, and he understood the risks of what he did and what it meant. It is not He considered a hero, but he was not really sure I can do? It was his gesture to be heroic, but he paid the price. “