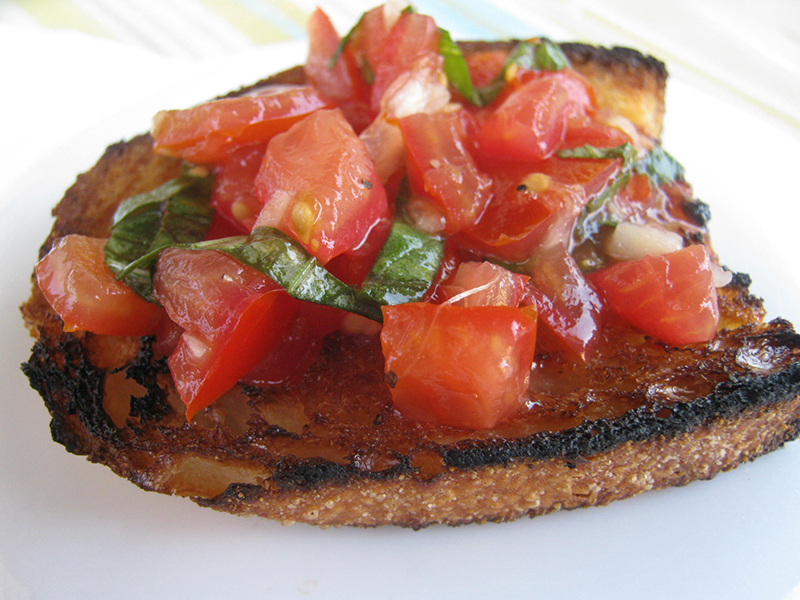 Bruschetta, (pronounce broo- skett ‘a) is traditional roman cuisine’s absolute queen. It descends from “poor” people’s food, but today every restaurant, even the chic ones, are honoured to include it in their menu. The famous XIX century roman poet G.G. Belli never made any reference to bruschetta in his poems (probably at his time it was called in a different way) but other more modest poets have written thousands of verses in their poems.
Even in past times the Bruschetta encountered the favour of every social class, but for sure it derives from ancient times in the country side where it made even the poor farmer’s tables fit for a king.
Nowadays Bruschetta has been enriched and many different types exist just like the original Pizza Margherita evolved into the modern array of variety. The original recipe is very simple and the perfect result depends heavily on the heat source used. The grill, plate, oven, or toaster will never attain the same results as the fires made from charcoal or wood.
Put one or more loaf slices (possibly cut in the middle) onto a low fire; take them off as soon as the bread surface becomes golden, ‘bruschetta’ without being burned. Put them on a large plain plate and rub them with a clove of garlic, while they are still very hot. Rub as much or as little garlic as you like. Shake a little salt over the top and at the end, slowly pour a little extra virgin olive oil over the top-pour it slowly so it will penetrate the porous bread tissue.
That’s all: Bruschetta is ready.
‘ For sure flowers won’t come out from your mouth’ as the famous roman actor Aldo Fabrizi wrote in the ’80s, ‘but the breath will smell of good health’.