The church of Santa Maria della Scala located in the homonymous square of Trastevere was erected on the orders of Pope Clement VIII in 1593, on a project by Francesco Capriani da Volterra. All this goes back to a miracle occurred while a midwife named Cornelia with an almost dead child in her arms prayed under the stairs of a house where the image of the Madonna was present. The child suddenly started crying. The miracle was cried out and the news spread rapidly throughout the city so that the Pope decided to build a church later granted to the Italian barefoot Carmelites who had been made independent of the Spanish branch by the bull of March 1597. The Discalced Carmelites are born with the reform introduced in 1562 by Mother Teresa of Jesus in the monastery of Avila in Spain for the nuns of the convent, reform then extended to the male branch of the friars who came to oppose the Carmelites shod.

Old phoptography of the sales room of the Farmacia di S. Maria della Scala – basically unchanged since the 1700s and finally closed as a business in 1954.

The friars taken possession of the church began at the beginning of 1600 the construction of the convent which is the first of the order. Actually very large made of two cloisters.

On the first floor of the convent stands the Spezieria, the oldest pharmacy in Rome. It was born to the use and consumption of the friars who elaborated the herbs of the attached garden, only in the seventeenth century it was open to the public and became so famous as to be frequented by rulers, cardinals and by the doctors of the pontiffs. The Pope established in the Papal States a special health police (the equivalent of the NAS of the current era) who had to verify that the rules of preparation and the classic recipes of the Galenic pharmacopoeia were in the respected laboratories. So much was the success that in short it was called “Pharmacy of the Popes” and the friars were exempt from paying taxes. Gregory XVI to make the pharmacy more prestigious instituted the freshmen: the high for chief-speziali and the low for the young and the subordinates
From 1600 the opening to the public with the preparation of galenic products continued until 1954. After this date an Indian community of Discalced Carmelites was established, which allowed the locals to return to life. During the Roman Republic of 1849 the convent spaces were used as a hospital. Luciano Manara also died there. In 1875, after the unification of Italy, the convent was requisitioned by the Ministry of the Interior and partly transformed into a barracks. The friars currently hold a small part. 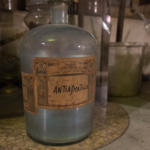 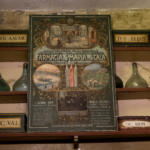 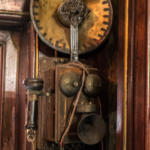 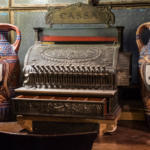 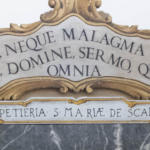 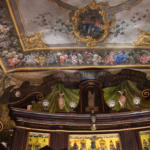 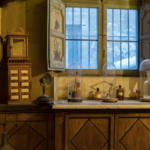 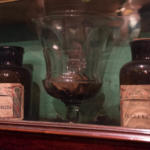 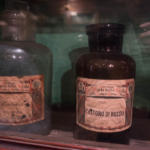 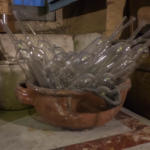 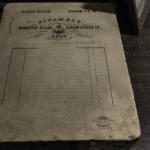 11. Stampo in marmo per le ricette 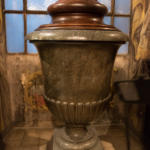 The Spezieria (Pharmacy)
At the entrance, in the atrium a large painting depicts the Basilio della Concezione, a famous eighteenth-century pharmacist, inventor of famous medicines such as water against hysteria based on lemon balm and anti-pestilential water. The water of the Scala is still famous, considered antinevralgica lavender also indicated for the diseases of the upper respiratory tract, for rheumatic pains and allergies, and the water of the Samaritan woman, used as a disinfectant.
In the visit he hits the large vase of Theriaca (photo n. 12), containing a drug invented by the physician of Nero, Andromachus the Elder. It is a complex of 57 different substances including male viper meat, considered an excellent antidote against poisonous substances.
The wardrobes show painted images of the fathers of medicine such as Hippocrates, Galen, Avicenna, Mitridate and Andromaco as well as paintings depicting famous guests including Vittorio Emanuele I.

The eras follow each other in the furnishings: the galenic laboratory and the mill are from the seventeenth century, while the following century are colored majolica, vases, scales, distillation stills, mortars, furniture, shelving, windows and the counter. Nineteenth century the liquor laboratory. Also interesting is an amplified telephone (photo No. 3) and the recipe matrix (photo n. 11) that went inked each time before placing it on the sheet.
Also interesting is a room for the manufacture of pills all controlled by electricity, belts, gears and rollers.

Yet another place was used for the manufacture of liqueurs.