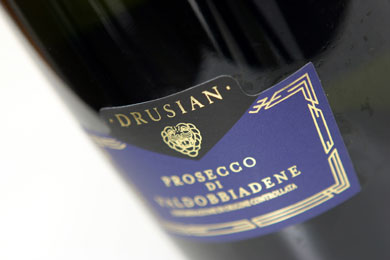 Prosecco
White sparkling wine, not too alcoholic, with a lively color, smell, and taste of fresh fruit and flowers; it always creates a cheerful atmosphere with its sparkling bubbles. It must be uncorked at the very last moment, and it should be drunk at a cold temperature (about 8’C) in a ‘flute’ glass.

The name of this wine, Prosecco di Conegliano, or Prosecco di Valdobbiadene, derives from the name of the cultivation areas. The best and rarest one is the Prosecco di Cartizze, this is a narrow and particular area that gives the wine a characteristic of extreme refinement.
The grapes used are called Prosecco, just like the wine. Prosecco has very ancient origins and has been cultivated in the North-Eastern part of Italy, near Treviso, for centuries.
Prosecco belongs to the category of the natural sparkling wines, with a concentration of natural carbon dioxide deriving from the re-fermentation of the basic wine.
The basic wine is obtained through a special technology with the most suitable grapes, picked at the right moment. The first fermentation takes place at a low temperature to keep the grapes’ fragrances unaltered. 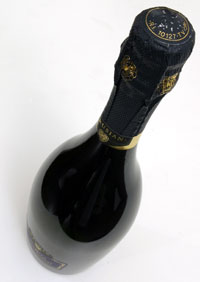 Prosecco di ValdobbieneFermentation is a chemical process caused by the sugars present in the grape and the leavens (microorganisms living in the grape’s peel); at the end of this process, alcohol ethylic and gasiform carbon dioxide are obtained.
The re-fermentation consists of adding other sugars and yeasts selected on the base of the wine obtained during the first fermentation. In this way, a second fermentation is activated in a great container with an hermetic seal, called an autoclave.
The sugars are metabolized by the added leavens to create other alcohol and gasiform carbon dioxide. This is done last, since it cannot come out of the autoclave until blended with the wine making its color more brilliant, exalting the grape’s perfumes, and conferring the wine to the fragrance (produced by the leavens) of bread when taken out of the oven.
Then the wine is bottled, in absence of air, so it doesn’t lose any carbon dioxide. It is for this reason that when a bottle is opened the gas bursts out, causing the typical foam and bubbles, or perlage, when poured in the glass.

Azienda Valdo is one of the major Prosecco producers and exporters in the international market. The Venetian family Bolla, who owned the Azienda since 1940, is famous for making Italian Spumante, and in particular, Prosecco, the most well-known all over the world.
Prosecco di Valdobbiadene: white, dry spumante wine made with 100% prosecco grapes. Smell and taste of apple, white peach, and a pleasant final light bitter flavour.
Fresh and sparkling, it is perfect with fresh and creamy cheeses, raw fish, shellfish and vegetable appetizers.

Azienda Drusian has produced Prosecco for three generations, and pursues with tenacity, the aim of always improving its products’ quality.
Prosecco di Valdobbiadene Superiore di Cartizze: white, dry spumante wine made with 100% prosecco grapes. Delicate citrus fruit flavor and smell. Elegant and fine, it is a wine to drink with hot and cold appetizers, cheese snacks and delicate salami, fish and vegetables, as well as dry pastries.

Prosecco is a market leader product made in the Venetian hills near Treviso. Hundreds of wine companies contribute to its production. To protect their product, these vine-growers gathered, in 1969, and obtained the acknowledgement of Conegliano, Valdobbiadene and Cartizze as unique production areas of Prosecco DOC (Controlled Origin Denomination), a quality mark given by the State that guarantees the wine is made by the producer following strict production regulations.

In these areas, on the ‘way to Prosecco,” every year during the vintage period (September and October), cellars are opened to everybody and guided tours of the vineyards, wine tastings, exhibitions, and shows are organized in a joyful atmosphere.

Conegliano is also famous because here, in 1876, the first Italian school of viticulture and oenology was founded; nowadays it has become the main scientific and technological research center for Italian oenology