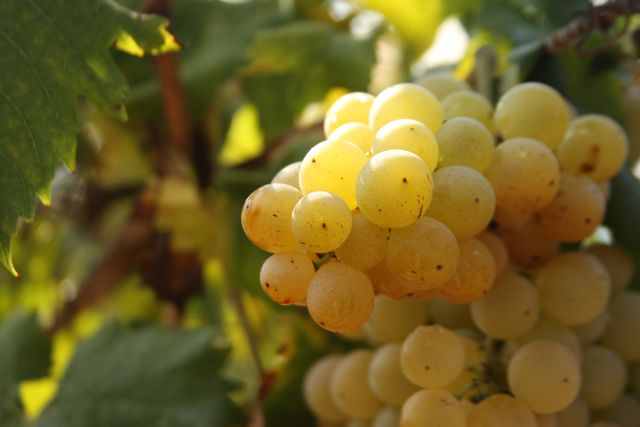 Moscato di Terracina
Each wine has its own characteristics (colour, smell, and taste) and for every dish we should choose the suitable wine in order to emphasize the flavors of both the wine and the food.
Generally, sweet wines goes very well with cakes and desserts, but sometimes they mate perfectly well with certain cheeses.

In the southern part of Lazio, near Latina, viticulture has spread in Agro Pontino, a marshy plain pulled out from the sea and reclaimed through a net of artificial channels.
It is in this area, up against the Tirreno sea and favored by a mild and constant climate, that one of the most representative of Lazio’s white sweet wines is produced: the ‘Moscato di Terracina’, perfect to drink with sweets and hard pastries.
The biggest Moscato wine producer in Lazio is Azienda Sant’Andrea, producer of the Moscato di Terracina Passito ‘Capitolium’, a sweet white passito wine made with Terracina Moscato grapes.
This wine has a golden yellow color with an intense and persistent nose of Moscato grape, candied orange, apricot jam, honey and vanilla. The grapes are picked when they are very mature, then they are withered for two months; after the vinification, the wine is put inside small oak barrels for 6 months.  This wine is excellent with cream cakes, dried fruits, nougats, and ‘tozzetti’ (typical dried biscuits) as well as with tasty cheeses like Gorgonzola.

Aleatico di Gradoli
Lazio wine production consists of about 90% white and only few red wines.
In the northern part of the region, near Viterbo, there’s Gradoli, a village situated in the Bolsena lake hills. Here a sweet red wine is produced: ‘Aleatico di Gradoli’, from Aleatico grapes. It is a rare wine made in this area by only two companies:
– Azienda Falesco: Aleatico ‘Pomele’. A Sweet red wine from Aleatico grapes. Ruby red in colour, with an intense nose of red flowers and cherries.  It has fascinating and pleasant flavors. Perfect at the end of the meal, with hard pastries, or as a liquor by itself.
– Azienda Trappolini: Aleatico ‘Idea’. Sweet red wine from Aleatico grapes. Ruby red color, with an intense nose of red rose, plum jam and soft and wrapping flavors of red mature fruits. The grape, once picked, is partly withered to let it become sweeter and then vinificated.
Excellent with nut biscuits and ‘tozzetti’ when dunked in.

The two types of wines mentioned above (Moscato di Terracina and Aleatico di Gradoli) are rare wines because they are made with grapes growing only in a small area. This is a unique and extraordinary experience for this territory because these wines, even though produced in small quantities, manage to emerge in the market for their uniqueness and often they gain important national and international awards.