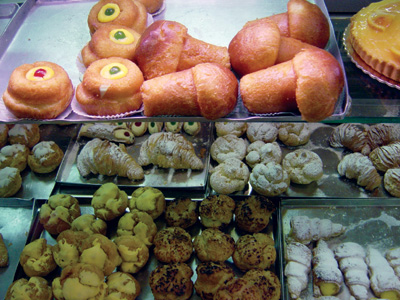 First of all, there are a few things I need to make clear about buying pastries in Rome: 1) They’re good, 2) They’re addictive and 3) They have a lot of fat and calories.

As with all of life’s vices, good things can only be enjoyed in moderation while paying heed to the bad consequences. Don’t smoke more than one cigarette a day if you have to smoke at all, don’t drink more than two glasses of wine with dinner, don’t take someone else’s prescription drugs, and don’t favor pastries too much without belonging to a gym But, if you feel your blood sugar is getting dangerously low and you think you might hallucinate, come with me and I’ll guide you through some of the best pasticcerie and their pastries in Rome. Because Rome was mostly working class, they weren’t able to much enjoy the leisure of eating sweets, so the best ones are products of Naples and Sicily. This is because, at one time, both regions were considered their own Kingdoms where much of the nobility lived. And as everyone knows, the rich like their sweets. One Roman pastry I did encounter, though, was the Maritozzo alla Panna; it resembles a puff pastry hamburger filled with cream. Millefoglie, for instance, is typically a French cake, but it was the Italians who perfected it. The Millefoglie is composed of layers of buttery puff pastry and Chantilly cream with almonds embedded in the sides and a generous sprinkle of powdered sugar on top. Cavaletti, located near Prati, makes the best Millefoglie in Rome. It is so good, the Queen of England orders hers from there. Like I said, where there is a good cake, you’ll find royalty sniffing around it. Unfortunately, you can’t buy any of the cakes by the slice and the Millefoglie comes in two sizes, a small one for 10 Euro and a large for considerably more. There are many other cakes here too, such as the Black Forest and the Mont Blanc (mountain of chestnut paste). There is also an assortment of sweet and savory pastries and chocolates. This is the only pastry shop I found with homemade chocolate flavored with peperoncino. In almost every pasticceria you can find a Cassata. This is an unusual pastry deriving in Sicily. It is comprised of a sponge cake soaked in liquor and a ricotta cheese mixture jeweled with candied fruit and chocolate chips. The outside is coated with an almond paste that is shellacked with a white sugar glaze. You can find a whole Cassata cake in some pasticcerie and a smaller pastry-sized one in most. So far, my pastry of choice is the Bab’. This is a short stubby pastry that looks, maybe like a mushroom, or maybe like a rivet. I’ve heard that it’s actually supposed to resemble a bell, but I don’t see it. Whatever its dimensions, it is dripping with rum. Sometimes you can even find custard inside and a nice strawberry on top.

Desideri, in Monte Verde Vecchio, has the best Bab’ by far. They also have every other cake and pastry imaginable and many of them are beautifully displayed in the window. Nowhere else will you find large screws, sprockets, hammers and the like made entirely out of chocolate. There are also other assortments of novelty candies, such as candied animals, and white chocolate eggs and cheeses for those who have a humorous sweet tooth. If you don’t want all the elaborate creams, custards and cakes there is a giant assortment of cookies to find as well. Innocenti, in Trastevere, displays numerous baking pans of biscotti. There are tozzetti, a cookie from Tuscany that is dipped into Vin Santo (a sweet white wine) before eating and biscotti di t’ for eating with your tea. These biscotti cover every bit of counter space and when I asked for a small assortment to take home, the pasticciera filled up two paper bags with such delights. I asked her to stop giving me so many cookies, but she told me she’ll stop filling the bags when she thinks I’ve had enough. A good quantity of Sicilian pastries can be found in Dagnino, located in piazza della Repubblica. Even though the people who work here are grouchy, the pastry selection is varied and good. There is a whole shelf displaying Frutta Candita, a glossy candied fruit, and pastries such as Pasta di Mandorle (almond paste), Cassata and a crispy Cannoli Siciliani filled with ricotta are plentiful. Breaking away from traditional Italian pastries, La Dolceroma, in the Jewish ghetto specializes in cakes and sweets from Austria and America. Here, you’ll find carrot cake, cheese cake, pumpkin pie (in November), Sachertorte (chocolate cake with apricot marmalade), Strudel, chocolate chip cookies, brownies, oatmeal cookies…. Beware, however, these sweets are extremely expensive; one cookie costs 1.20 Euro. Just down the street from La Dolceroma is a pasticceria that might be called Il Boccione. I’m not sure since there is no sign above the door and no way of telling this is a pastry shop except for the people lined up outside. Il Boccione supplies Rome with authentic Jewish pastries such as the Pizza Ebraica (Jewish pizza) which is more like bread than a pizza filled with dried fruit, raisons, pine nuts and other good things. 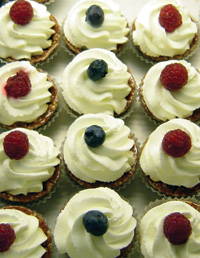 Then they have the Pasticciolo Duro, a hard brick of bread with honey and almonds, and ricotta pies. One can easily see the pride Italians have in their pastries by how much care goes into their making and presentation. If you order an assortment from any pasticceria, note how they are packaged for you to take home. They are carefully placed on a tray and cardboard crossbeams are installed above to prevent them from being crushed. The tray is then gently wrapped in paper and a ribbon ties it all together with a nice bow on top that comes undone easily when pulled.

Il Boccione:
via Portico d’Ottavia, 1
(Jewish Ghetto)
Not too hard to find, just listen for a group of old Jewish women screaming, and go there.

Duranti:
via Livorno, 9
and via Balzana, 61
The best one is located near the metro stop in piazza Bologna

G. Antonini:
via Sabotino, 19/29
Try the Cannonata. It has a thin layer of sponge cake and a mountain of zabaione cream with chocolate poured over.