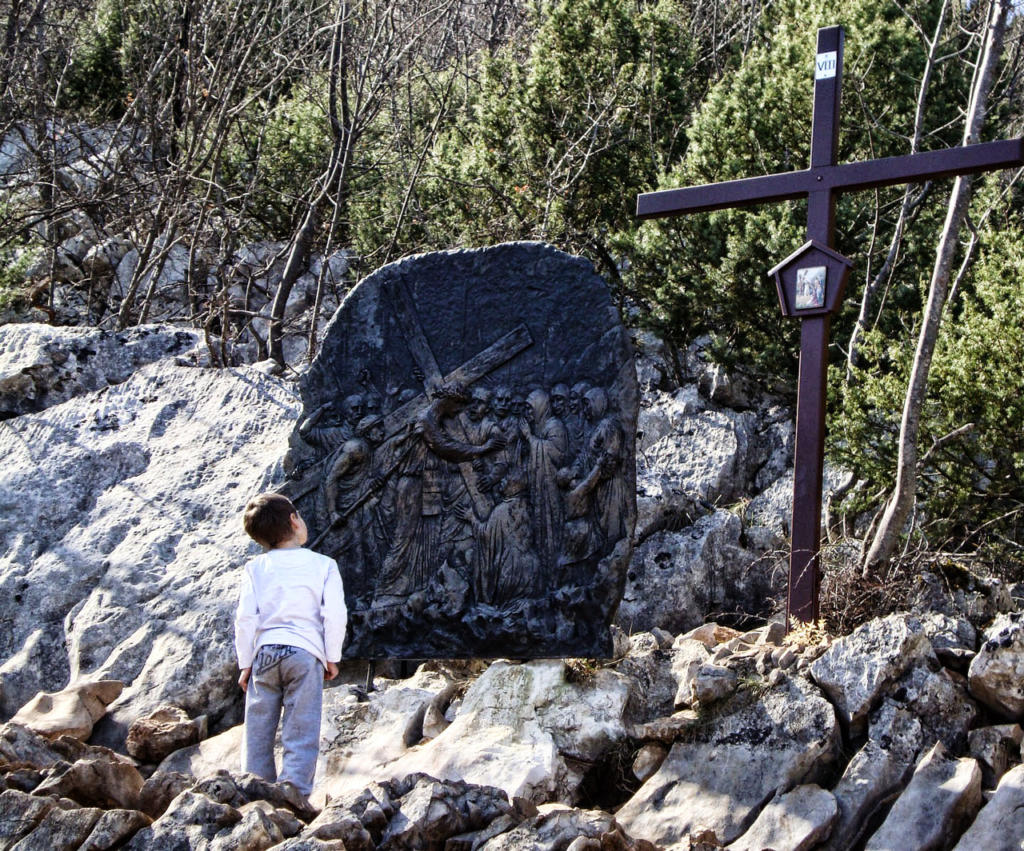 From today, 2 September 2018, I will report to the readers of Rome Central, all the monthly messages of Our Lady of Medjugorje that gives to the visionary Mirjiana every 2 of the month on the mountain of apparitions, where I witnessed the apparition of May 2 2012, in my first and only pilgrimage to Medjugorje, and from where my book was born “At Medjugorje, Our Lady has looked at me” published by the Editrice Elledici di Don Bosco.
But let’s briefly review the history of the apparitions that have lasted for over 30 years!
It was June 24, 1981, around 6.00 pm, when 6 children of Medjugorje, respectively: Ivanka Ivankovic, Mirjana Dragicevic, Vicka Ivankovic, Ivan Dragicevic, Ivan Ivankovic and Milka Pavlovic, saw on a hill in the place called Podbrdo, an apparition , a white figure of a woman, with a baby in her arms …
In one of the first messages, specifically on June 26, 1981, the woman in the apparition revealed herself to six boys, saying:
«I am the Blessed Virgin Mary».
From that day, until today, the apparitions and messages have continued unabated in Medjugorje, with the usual intent to exhort hearts to “conversion”!

Children, my words are simple but full of maternal love and concern: My children, the shadows of darkness and deception widen above you, I call you to the light and the truth, I call you to my Son.
Only He can convert despair and pain into peace and serenity, only He can give hope in the deepest pains. My Son is the life of the world, the more you know him, the closer you get to him and the more you will love him because my Son is love, and love changes everything.
He also makes wonderful that which without love seems insignificant to you. So again I tell you that you have to love a lot if you want to grow spiritually. I know, apostles of my love, which is not always easy, however, my children, even the painful roads are ways that lead to spiritual growth, faith and my Son.
My children, pray, think of my Son, during all the moments of the day raise your soul to Him and I will gather your prayers as flowers from the most beautiful garden and give them to my Son.
Be truly apostles of my love, give everyone the love of my Son, be gardens with the most beautiful flowers.
With prayer, help your pastors to be spiritual fathers full of love for all men.
Thank you.

Reflections on the Message of Our Lady:
From this last message of Our Lady, we can see a concern of the Celestial Mother who becomes more and more serious, towards humanity, as if we had reached the end of a deadline … Our Lady urges us with ever greater emphasis and with a particular, almost exaggerated pain, to approach his Son Jesus and to ask for his forgiveness, entrusting us to his infinite mercy … but the exhortation of Our Lady is as always the loving one of a mother towards her children!
He does not oblige us, even though he knows the urgency and the drama of the moment, but he invites us gently to welcome his Son and to love him without any hesitation.