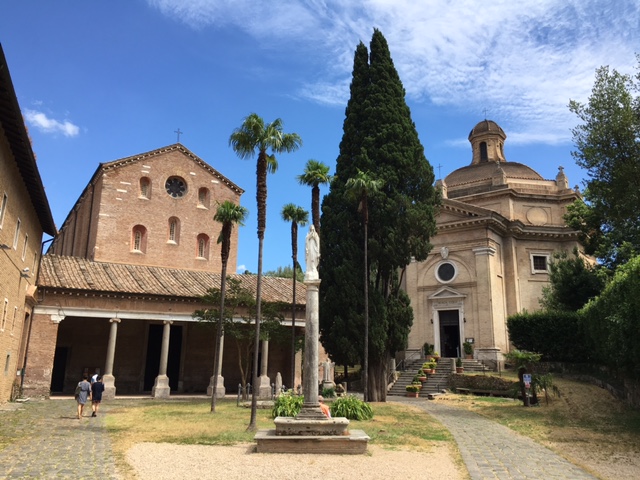 The Abbey of the Three Fountains complex is located in an extensive green area along the ancient Via Laurentina, it is one of the most important places in the history of Christianity.
On 29 June 67 there was the martyrdom of the decapitation of Saint Paul. The head, according to the legend, rolled three times on the ground, yielding as 3 water springs – from which the name of the place: Three Fountains.
There is no news about the death of Apostle Paul in the pages of the New Testament, but we have first news from the testimony of Eusebius of Caesarea (265-340): “During the reign of Nero, Paul was baptized right in Rome and Peter was crucified . The tale is confirmed by the name of Peter and Paul, who is still preserved on their tombs in this city “(Hist., 2,25,5). 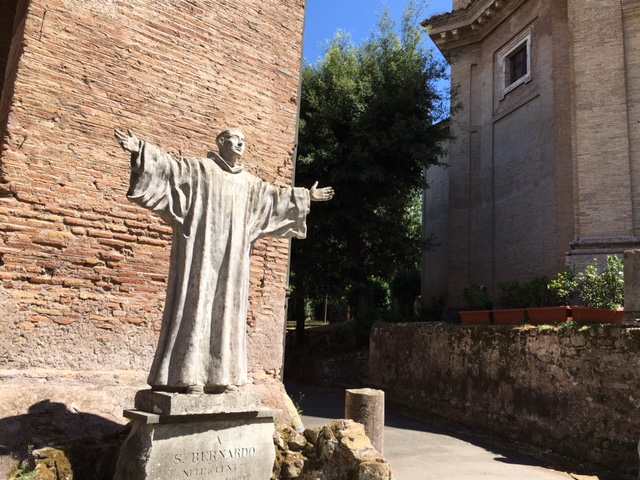 In the past, the valley was called Acquæ Salviæ – the street that leads to the monastery takes its name – and from the early Christian centuries there was an oratory attesting to the worship of the saint in the place of martyrdom.
Between the 6th and the 7th century, a group of monks from the region in the south of today’s Turkey, formerly known as Cilicia, the land of origin of St Paul, founded a monastery which, in the following centuries, underwent numerous renovations.
The construction of the Abbey Church and the structure of the monastery, as it is today, dates back to the twelfth century, when Pope Innocent II (1130-1143), after commencing the restoration work of the monastery which was in a state of abandonment, gave it all Cistercian order. 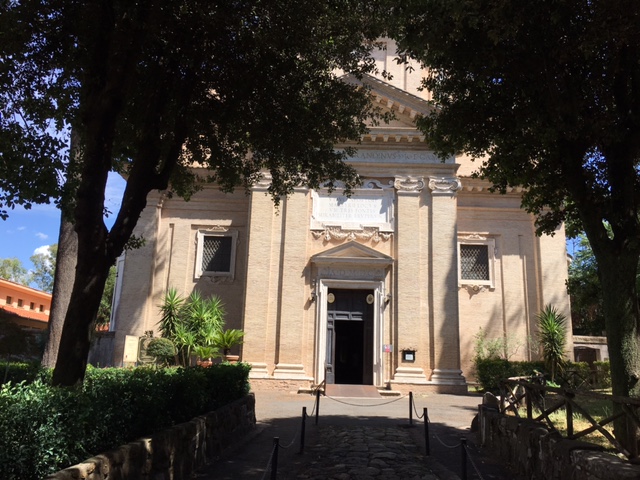 The Abbey of the Three Fountains, in addition to the Abbey Church dedicated to Saints Vincenzo and Anastasio, are the Church of Santa Maria alla Scala Coeli and the Church of Sao Paulo and the Martyrdom, which are entirely accessible to the public. 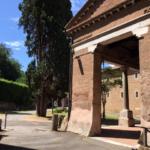 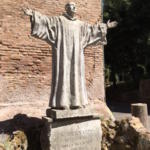 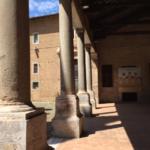 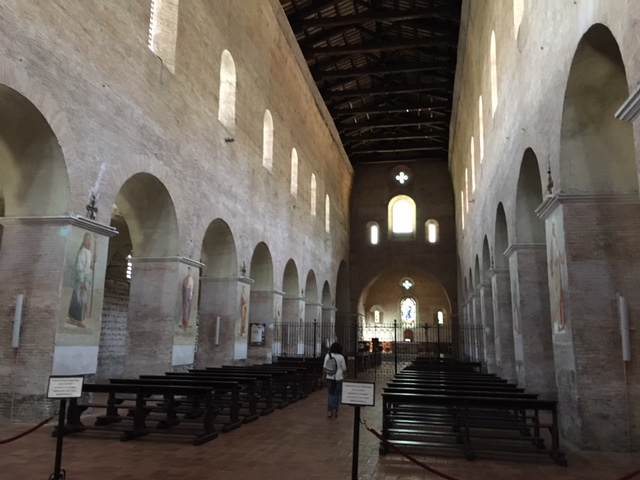 The area is forbidden to the public

The cloistered areas of the Abbey of the Three Fountains can be visited exclusively at the new frontiers of technology, wearing a viewer that allows access to virtual reality (VR). The monks, together with the programmers of a small Roman company, decided to finally show the wonderful cloister whose monks are usually used to pray, study and meditate.

The Virtual Reality Experience (VR) is set up inside the Abbey Museum area and displays visitors for the first time in the heart of the Abbey Church and the Cloister of the Trappist Monks.

It is very curious to note the link between monasticism and 3D technology, and it is equally interesting to note that the Abbey of the Three Fountains is probably the first sacred place in the world to offer its visitors a virtual reality installation that compenetra all inside the areas historically denied to those who are not a Monaco.

The Abbey reveals its secrets
Only the strong will of enlightened people has been able to show these areas of incredible religious interest and of extreme historical and cultural value, which have always been inaccessible to the public as they are by their very nature reserved for monastic life and cloisters of the wonderful Trappist monks custodians and always been in charge of maintaining this places. 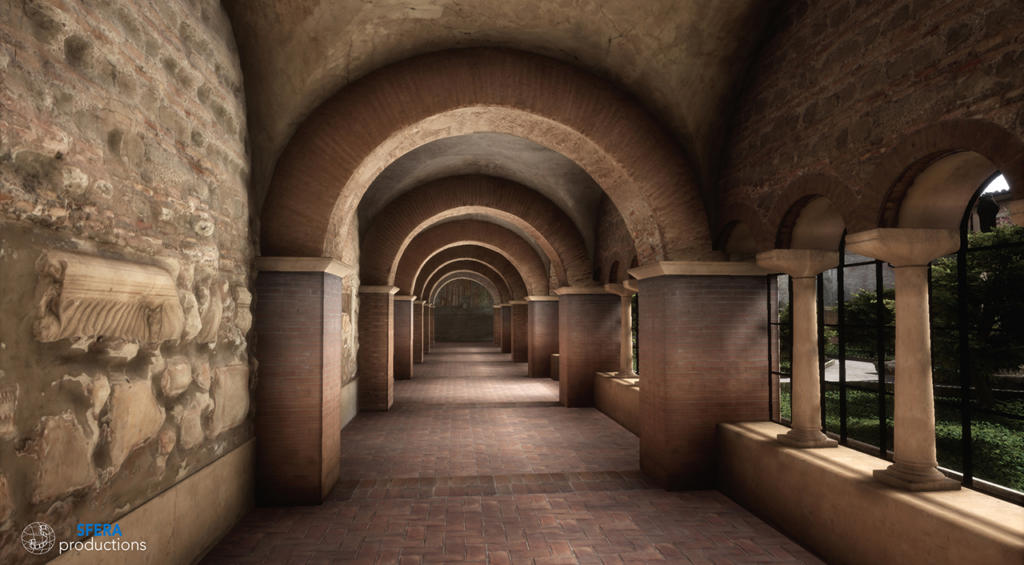 Through virtual reality, and precisely with the use of HTC Vive technology, in a permanent installation present within the Abbey Museum area, visitors will be able to open the gate for the first time and access the entire Abbey Church , and will virtually access a monument of the most interesting in the world that represents the medieval Roman transition architecture. You can also visit the Cloister, the place where the Cistercian monks meet in prayer and meditation since the twelfth century. 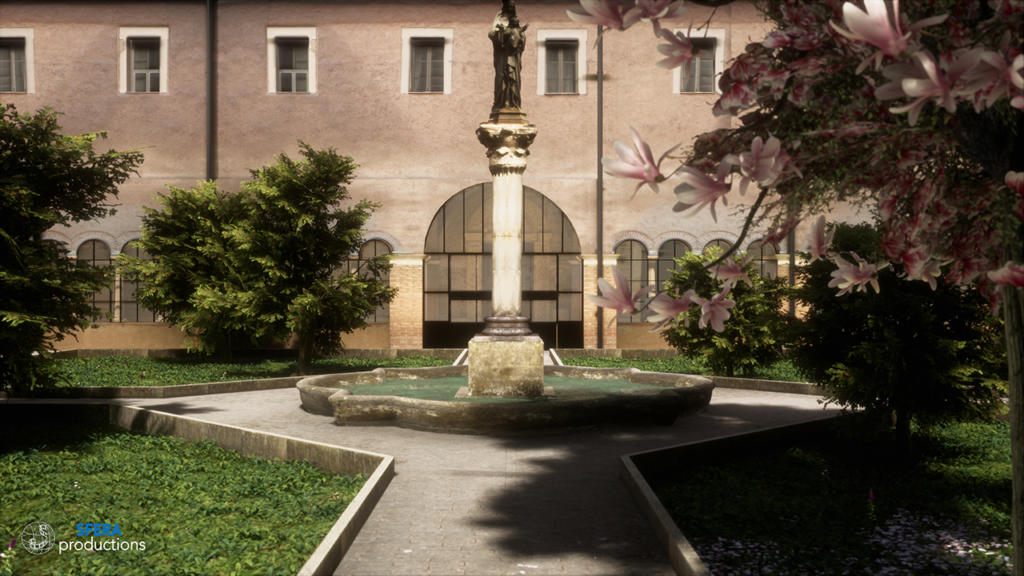 All places have been faithfully reproduced with care and the computer graphics  is very close to reality and the experience allows to realizate the path in real time.

Technological installation certainly brings some effect in a place so rich in high spirituality and offers 2 tours:
In the first tour, the gate that delimits the heart of the Abbey Church opens as if by enchantment, allowing access to the nave cross, to the side chapels, to the altar and to the choir seats, beyond which it is pushed and raised in the air Until you get a spectacular panoramic view of the entire complex.
On the second tour, as projected by a stream of energy, they are guided along the four sides of the Cloister and finally in the central garden, told during the blooming period of the giant magnolia that adorns the entrance.
During the two virtual experiences, the voices of the monks and their songs, together with the bells and the noises of the nature of the garden of the Cloister, contribute to simulating a sense of real presence in the place.

The French monk Dom Jacques Marie Brière Abate superior of the Abbey of the Three Fountains from about 20 years, said: “The more you live in this place, the more you understand the importance and beauty of the heritage we have received in gift and that today thanks to state-of-the-art technology, we can finally share: by showing the places we live in everyday life, we can give people at least an idea of ​​what is monastic life, a life of solitude and constant search for the presence of the Lord “.
And he adds:
“As for the use of technological means, monks have never feared technics and technology; On the contrary, they have always had a very positive view of all that helps men to work and to support themselves.
During the Middle Ages the Cistercians were the best plumber of their time, distinguished themselves in iron processing and the many monasteries they have built over the centuries are a tangible testimony to how they have always been at the forefront of the techniques and often pioneers in the building , As well as in animal breeding.
Achieving the best results in all the activities undertaken, thanks to the help of the means and the techniques, is an expression of the will to succeed in supporting the poorest: the wealth of monks is not only spiritual wealth but also A material wealth, cultivated to be put to the service of the prosperity of the neighbor in the world we live in. “

The museum’s interior area at the Abbey of the Three Fountains, where virtual tour sites are set up and where Trappist Monks (beers, liqueurs, chocolate, oil, jams, honey, creams) are available for sale And beauty, etc.) is open daily from 9:30 am to 1:30 pm and from 3:30 pm to 7:30 pm.