It is an installation Lastlife, the work of the artist painter Sergio Angeli together with Marino Festuccia, photographer, who present March 10, 2018 at 16.00 for the first time at the MAAM, Museum of the Other and the Elsewhere of Metropoliz, with the texts and the care of Silvia Colasanto. Two works created for the occasion, a painting and a photograph will be donated to the permanent collection of the Museum.

The MAAM, Museum of the Other and the Elsewhere of Metropoliz, in Rome is a space of rebirth for the ART. It is located in a public space, a factory occupied for years, where today it is possible to realize new forms of artistic experimentation and social coexistence. Here, in fact, art becomes collective: finally the culture that sustains society, contaminating, welcoming and colored works.

The Lastlife installation presented is a reflection on transience and hope, death and regeneration. Nature, observed and mourned during and after its end, is a decoded reading of human parables and terrestrial trajectories. The traveling exhibition consists of 7 paintings, 3 photographs documenting the living installation and 12 works on paper.

Pictorial work and the photo by Marino Festuccia living installation is a lamp assembled with industrial remains. In the history of art, the reuse and recovery of materials used for artistic production is very frequent. So artists from all over the world started from what they found to reinterpret it in their own way starting from Picasso, Duchamp, Rauschenberg, Burri, Manzoni, and Steinbeck, Kounellis, until today. In this world filled with technology and invaded by remains, the abandoned industrial object is reused and as in this MAAM museum there is a “Rebirth”. 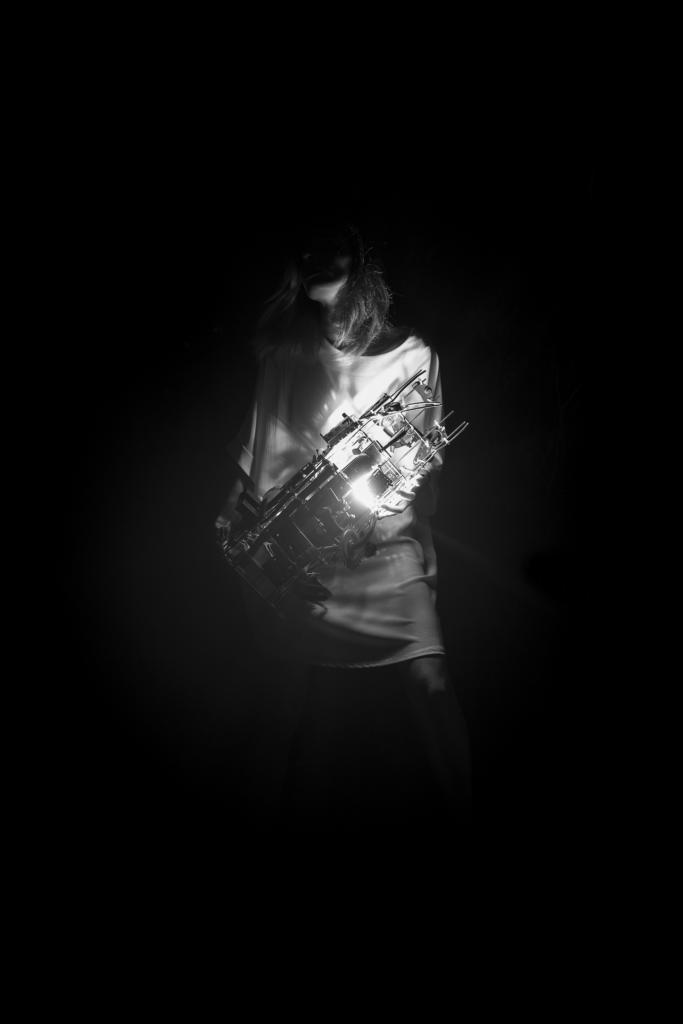 Reused industrial object is a poetic act par excellence, so from it the artists give rise to intense works full of poetry, the obsolete that becomes the new. Maps of the world invisible from the past that become visible in new works. The material in the work relives in a great balance of the extremely spontaneous form in the work of Sergio Angeli. 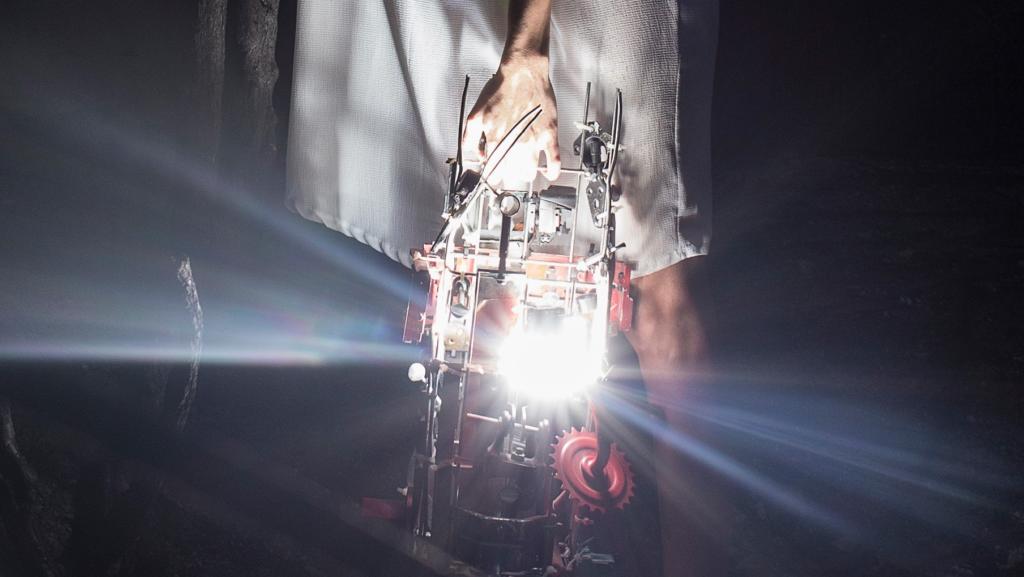 “The man represented as a hybrid in the pictorial work becomes a product, fruit of consumerism, at the mercy of a systematic and infinite slavery”. 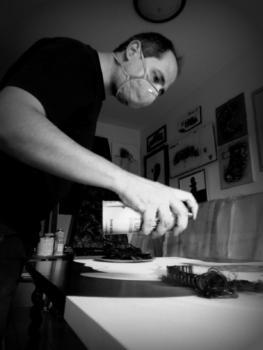 1- How does your artistic journey start? And this desire for the reuse of the object?

My journey began about twenty years ago, I experimented with different techniques, starting from the figurative, poetry, music and literature have greatly influenced my way of conceiving, attending and living in east Rome, a decidedly industrial area, I started to look around me and find myself among industrial leftovers and former factories. From there begins my mission in representing humanity overwhelmed by technology and consumerism, preferring disposable rather than re-evaluating.

2- How is the imaginary world of an artist? The survey of the work? When does it happen and why do you think?

I think it is very intimate the imagination of an artist, to get naked, share with the public what you feel without any particular filter. Having a mental vision of the work that will then be structured and made visible to everyone. This happens to me, I do not conceive a work by sketches, rather I visualize it mentally and I limit myself to fixing on paper the idea to be developed.

3- What is the meaning of your creative experience at MAAM?

I am fascinated by a space like the Maam, for the experience it has, for the possibility that it allows artists to free themselves and freely conceive their work without compromise. I believe that there is no such location and we artists should be proud to be part of such a unique reality.

4- Do we talk about this collaboration between your painting and photography by Marino Festuccia? How did you find yourself?

We have known each other for several years and in the past we have already worked together, the Lastlife project was born practically under our house (a few years we became co-tenants) where last summer there was a bad fire that devastated much of the park to Anoene, we found ourselves observing a lunar landscape, covered with ashes and gray hills, so I had the idea of ​​creating a living installation depicted by a naked woman dressed just by a white robe carrying a lamp in her lap assembled from the remains of a civilization that was industrialized, last life made of hope and a remaining light of a world that no longer exists. Everything was set by the lens and magnificently documented by Marino. A conceptual work needs a close-knit group of artists who interact and work together. I have always believed in this, in the interaction between the various forms of art.

5- Your creative process also arises from reviving industrial objects, how important is it today? What symbolizes for you?

Give life to what has been. Used and thrown away, I gave life to the human post and the post industrial, to what happens after abandonment, put the pieces together. The individual has now become an object of consumption, annihilated by unbridled consumerism. I think that today man has become a product more and more a victim of throwing away old things and buying new products, being at all costs in step with technology and production news. I strive to represent the world I see, a contaminated world, a “mechanical” civilization in the gesture and in the understanding of everyday life.

6- How can the human being be represented through your works?

The human post in fact, the human being that is no longer, now become hybrid and contaminated by technological development. A synthetic presence without spirituality, a being that acts automatically as it was imposed by a system studied and not at all random.

7- Can space influence the work? How do you plan to implement the installation?

A conceptual work I think we must adapt and interact with the hosting space, at the Maam we will install a pictorial work of the Lastlife series, inspired by the living installation, and a photo that depicts the same on supports made of recycled metal, with the lamp assembled and symbol of the project that illuminates everything.

Hope and awareness. Salvation comes from an awareness, we start from the human post to arrive at a new life, in what form we can not foresee it, but the important thing is that there is new light.

9- Is there an artist to whom you inspire you in a particular way or that you esteem, even from the past?

Over the years there are several artists that I loved in a visceral, starting from Fussli, Blake, Van Gogh, passing through Giger, Bacon and Schiele, until you get to Tano Festa, Schifano, Burri and Kounellis

without forgetting the fundamental role they had in my cultural growth artists in music as Ian Curtis, David Bowie, Pink Floyd, Niko and many others

I want to live expressing what I feel, give life to what I see with the eye of the soul, I’m doing it and I’m putting it all facing every difficulty of the case, but we artists have hard skin and we are used to sacrifice. In the coming months Lastlife will evolve and change shape in other spaces, I like to call it a “shapeless” project. Soon I will inaugurate a new project called MyClone, soon I will reveal details and so on.

11- In order to finish I always ask the artists I meet … Is there a question I did not ask you [and that you would have liked to hear you ask]? What answer would you give …

What do you expect from the future? The answer is: better than you did not ask me this question (I laugh, of course)

Prologue and completion of the exhibition at the MAAM will be the electro-tribal performance of the Ipnoteka in a crescendo of ancestral rhythms and contemporary influences.

After the first stage at MAAM, Lastlife will look for its evolution by interacting with the other hosting spaces thanks to site specific installations, video projections and musical developments that will highlight its contaminated and contaminating character.

From the text of Silvia Colasanto: “A woman, a glow, a scorched, desolate and abandoned land.
The woman, dressed in white, is life. The last one, maybe. It is hope that it arises and light that illuminates. It is a tenacious light that filters through a lamp with mysterious perimeters, assembled with the remains of a technological world exploited and repudiated in oblivion that drags it away from the eyes and memory. It is a rejected world that turns into a trustful mirage, reverberation and comfort that illuminates a path from someone else violated and transfigured into a carpet of leaves and ashes. It is trust that tightens and protects itself, that caresses like a mother would do with her newborn child. It is an expectation or perhaps only a dream to be desired and to pursue a mental journey of unpredictable trajectories, a continuous tension towards an invisible and spiritual rebirth. It is the imaginary path to be traced before the lightning announces a new storm and the thunders annihilate the faith. “

Sergio Angeli – Born in Rome on 13 January 1972, he is an artist dedicated to painting and installations.

In 1999 he exhibited at Palazzo Barberini in Rome. In October 2011 he exhibited at the Villa Vecchia Museum of Villa Dora Phamphilj in Rome. In 2013 he participated in the exhibition “Incendium” artists by city of science, at the PAN of Naples. In 2015 he worked together with Corrado Delfini in the project “La materia dell’enzenza” edited by Lorenzo Canova and which consists of a series of bi-solo exhibitions in various museums including the Museo Civico Umberto Mastroianni di Marino, at the Arroyo de Campobasso and the Ex Gil of Rome.

In 2016 he exhibited at the group exhibition Tattoo Forever Vanitas vanitatum at the Macro Testaccio in Rome, curated by Ilaria Bandini. In 2017 he works on the “Lastlife” project which includes several exhibition stages. The conceptual work curated by Silvia Colasanto includes a living installation documented by the photographer Marino Festuccia and a new pictorial cycle.

Marino Festuccia- Cloned in an Umbrian laboratory in 1984, Marino Festuccia arrives in Rome in 2006 where he still lives and where he obtains a degree in Communication at the University of Roma Tre.

In 2011 he began his career in art photography collaborating with renowned artists from all over Italy.

He has more than fifty exhibitions in Italy between personal and collective.

In photography he mainly deals with portrait and fashion.

Maam, Museum of the Other and the Elsewhere of Metropoliz
Via Prenestina, 913, 00155 Rome

One comment to “At MAAM “Lastlife”, The Renaissance for ART””